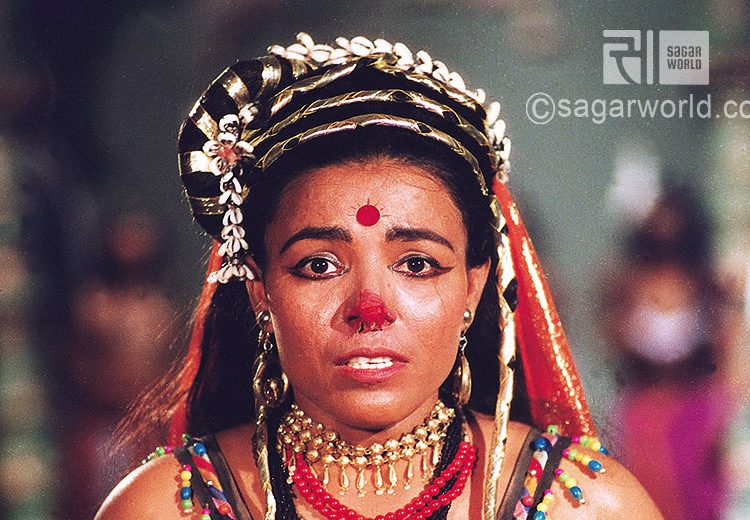 Shoorpanakha was the daughter of Vishrava and Kekasi and the younger sister of Ravan. Ugly, ill formed and repulsive looking, she could work many miracles by her mayavi (illsionary) powers and was wicked and mean. She was married to a Daitya (children of Diti and Sage Kashyap) from the Kalkeya clan. But unfortunately when Ravan set out to conquer the world, he began to slay all Devas and Daityas, and Kalkeya Daitya was also killed by him, with his family.

Shoorpanakha arrived at Ravan’s door and cried bitterly and cursed him. She said, “Could there be any brother who would be responsible for making a widow of his sister?” Ravan was filled with remorse.He said to her,“I cannot bring my brother-in-law back, but, to compensate for your loss. I give you the rule over the Dandaka forest. You can go with your maternal cousin Khar, and be protected by fourteen thousand rakshasas. Khar and Dooshan will do as you bid.”

So Shoorpanakha left Lanka to live in the Dandaka forest. She and the other rakshasa’s loved to harass and disturb the sages who lived in that dense forest. They would threaten them and often kill and eat them. Soon Dandaka forest became a place to be feared because of their sway over it. There were piles of bones and skeletons everywhere; that was all that remained of the sages they had devoured.

During their exile to the forest, Ram, Sita and Lakshman came to Dandaka forest. The remaining sages told them about the menace of the rakshasa’s. Ram assured the ascetics that he would soon get rid of all rakshasa’s there. Shri Ram began to live by the River Godavari, at Panchavati in a simple rustic hut. While roaming about the forest, Shoorpanakha saw Ram, Lakshman and Sita. She was besotted by Ram.

Using her Maya (magic), she magically changed to a lovely lady and proposed to Ram. He said, “I am already married and have my wife here. Perhaps you should ask Lakshman to be your mate.” She went to Lakshman who said, “I am a servant of Ram and Sita. What joy would you have from marrying me? You will become a servant too.”

Both Ram and Lakshman thus rejected her offer. She assumed her original awful form and began to harass Sita. Enraged, Lakshman cut off her ears and nose. She went weeping to Khar and Dooshan, and they along with Trishala and the fourteen thousand rakshasas, attacked Ram.

But in a short battle, Ram killed all of them with his arrows. Like a wounded serpent, Shoorpanakha rushed back to Ravan’s court and said, “Look what Ram, Prince of Ayodhya did when I proposed marriage to him! He also killed Khar, Dooshan and all my fourteen thousand rakshasa’s.”

Ravan sought the help of Mareech to steal Sita away, in order to avenge his sister’s insult. Ram and Lakshman eventually reached Rishyamukh Mountain in search of Sita, where they met Hanuman.They befriended Sugreeva, who, with his vanara army, helped them to attack Lanka. The entire race of Rakshasa’s was wiped out. Thanks to Shoorpanakha, the end of her race was brought about.

Shravana Kumar – the most devoted son ever of parents

Shravana Kumar - the most devoted son ever of parents