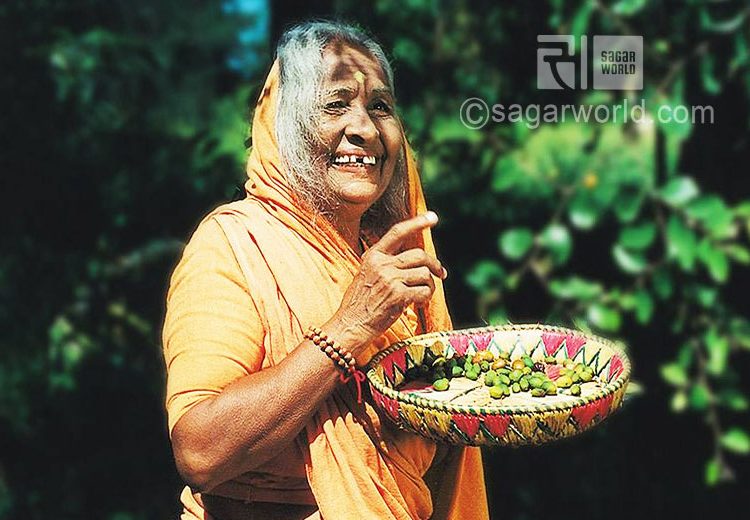 Shabri was a disciple of Matanga Rishi. She was quite aged and belonged to a race of Vanavasi’s (forest dwellers) called Bhils. Although she was unlettered and uneducated, she had an immense amount of faith and devotion, and a firm belief in her Guru.She spent her life in Sage Matanga’s ashram serving him, and tending to chores like cleaning the place, watering the garden, collecting the wild fruits, berries and tubers that were the staple diet of an ascetic. Sage Matanga was very pleased with her diligence and devotion.

When Rishi Matanga became old and realised that his time on earth was nearing an end, he asked Shabri to look after the ashram after he was gone. His words saddened Shabri. She said, “I cannot imagine staying in this deserted forest without your presence which gives me security and comfort. Who will be my support here? “

Sage Matanga said, “Shabri, to relieve the earth of its problems, soon in the house of King Dashrath, Shri Ram will be born, as an incarnation of Vishnu. I will not be fortunate enough to behold him. But he will certainly come to this ashram and you will have the good fortune of his darshan (sighting). Wait here till Shri Ram arrives.” With these words, Sage Matanga achieved paramapad (ultimate bliss) and left his earthly body.

Shabri, the true devotee, now dedicated her life to her guru’s words of advice, and spent her days waiting for Shri Ram’s arrival. Every day, she swept and cleaned the ashram,replenishing the jugs with fresh water and gathering fruits and tubers for Shri Ram. She waited and waited for years on end. She became old and infirm, but the assurance in her heart that Shri Ram would arrive, remained ever-fresh.

At last, in search of Sita, Ram and Lakshman arrived at Sage Matanga’s ashram, after killing the demon Kabandh. Shabri welcomed them and washed their feet reverentially with the tears that flowed from her eyes. Shri Ram asked her to fetch some fruit.

Shabri offered him berries and fruits but before giving them to Shri Ram, she tasted each one of the berries. She forgot that she was feeding Shri Ram with berries that were bitten and therefore unfit and impure for offering to another. But, swayed by her intense devotion, Shri Ram ate the berries with joy. It was a moment when the devotee and divine were joined in

Shabri suggested that they seek out Sugreeva, the king of Vanaras (monkeys) and said that he would be able to help them in their quest for Sita. “That is what my omniscient guru had said,” she quoted. “He had also told me the reason for your incarnation on earth.”

Shri Ram was pleased with the devotion and care of the simple-hearted Shabri. With the blessings of Shri Ram, Shabri finally quit her earthly body and left for her heavenly abode.

As directed by Shabri, Shri Ram and Lakshman then continued on their way, to meet Sugreeva on the Rishyamukh Mountain. (Refer to the map for the place where Shabri met with Shri Ram). The tale of Shabri will never die because it demonstrates a benchmark for devotion and love towards God.