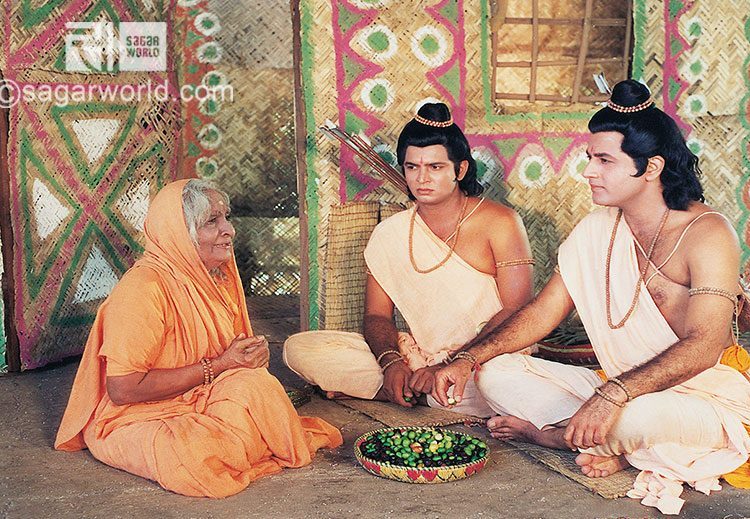 In the forest, while searching for Sita, Ram and Lakshman encountered the demon Kabandh. His arms were each one yojana (1 Yojana =8-10 miles) long and his head was thrust into his torso. His feet were also pushed inside his body which was just a huge torso with a face in it. He used to capture the jungle animals with his long arms and devour them.

He now caught hold of Ram and Lakshman and was about to devour the duo. But they were quick and alert, and cut off his long arms, thus killing him. According to his final request, Ram and Lakshman dug a hole and buried him in it. When they performed his final rites, he appeared as a gandharva (celestial musicians) and then disappeared in the sky. But before doing so, he told Ram and Lakshman they needed to visit Shabri at the ashram of  on Rishyamukh Mountain.

So Ram and Lakshmana proceeded there immediately. Sage Matang had been long deceased, but before quitting his earthly form, he had told Shabri that “You will behold the earthly form Rama, the Incarnation of Vishnu, at this very ashram”. Her faith in the promise of Sage Matang made Shabri wait for many years for the arrival of Shri Ram.

Every day, she would gather fruits and berries from the forest, taste them to check how sweet they were, and then set aside the sweet delicious ones in the event that Ram showed up that day. She did not realise that by biting the fruits, she was making them impure and unfit for offering to anyone. So innocent was her devotion.

When Ram finally arrived at the ashram, she was overwhelmed. She welcomed him and offered him those fruits she had gathered, tasted and saved for him that day. Shri Ram ate those fruits with a smile, realizing that it was her devotion to him that had made her taste them.

When Sugreeva saw the two valiant men with their bows and arrows approaching, he was filled with apprehension. He thought they might have been sent by his arch-enemy, his own brother Vali, to kill him. So he sent his brave minister Hanuman to find out the reason why the two young warriors were there, roaming in the forest and approaching Rishyamukh.

Hanuman took the guise of a Brahmin and approached them, asking the two who they were and their reason for coming there.

Ram told him about his fourteen years exile in the forest and the kidnapping of Sita. Hanuman realized that this was his Ishtdeva (personal/favorite god) Ram, and bowed down to touch his feet in veneration.

He took his original vanara (monkey) form and introduced himself as the minister of Sugreev, the very one they sought. Then he placed the two princes on his shoulders and with a leap reached the top of the Rishyamukh hill where Sugreeva was living.

Ram told Sugreeva his story, and Sugreeva in turn told him about his older brother Bali and the reason for their animosity. Bali had gone to kill a demon hiding in a cave, and asked Sugreeva to keep watch, bidding him wait for at least a month outside the cave before giving up on him.

Bali did not return after the month was up, so Sugreeva placed a large rock over the mouth of the cave, to imprison the demon he had assumed had killed Bali. He further related how, when he returned to Kishkindha, the capital and reported Bali’s death, the Vanara subjects crowned him, Sugreeva, as King.

Meanwhile Bali had in fact killed the demon but had not been able to find his way out before the month was up. He managed to escape from the cave, and came back to Kishkindha. He had assumed that Sugreev was trying to steal his throne, and so had become his mortal enemy.

Bali had even taken away Sugreeva’s wife Roma, while he went after him relentlessly, to kill him. Sugreeva had escaped, but Bali followed him everywhere, close at heel. Finally Sugreev had realized that the only place he would be safe would be at Rishyamukh hill where Bali would not go, thanks to a curse that had been put on him by Sage Matanga long ago.

Hence, Sugreeva and his followers had settled down at Rishyamukh, safe from the wrath of Bali. When he heard this story of Sugreeva’s, Ram promised him that he would kill Bali and get Roma back together with Sugreeva. Ram and Sugreeva forged a bond of friendship and alliance, and with fire as their witness, they took an oath to help each other.

Sugreeva gave Ram the ornaments that Sita had thrown down while she was being carried away in Ravan’s aerial chariot, and Ram recognized them as Sita’s jewels and was filled with sorrow. Sugreeva promised him that he would help him search for Sita with his entire army of monkeys.

But he was not convinced that Ram would be able to kill Bali, who was extremely strong and difficult to defeat. As challenged by Sugreeva, Ram pierced seven palm trees with a single arrow. The he lifted the huge carcass of the demon Dundubhiby the toe and flung it far into the ocean.

Sugreeva was now convinced of Ram’s prowess. At Ram’s suggestion, Sugreeva challenged Bali to a wrestling match thus began the Bali Sugreev battle. Bali’s wife Tara tried to warn him that the Vishnu avatar Ram was now an ally of Sugreeva, and that was why he had issued the challenge.

Ram then placed a garland around Sugreeva’s neck, so that he could tell the two apart, and sent him back to fight another round. The second bout began. Concealed behind a grove of trees, Ram aimed an arrow and felled Bali, and Sugreeva reclaimed his wife and the kingdom. Thus concluded the Bali Sugreev battle.