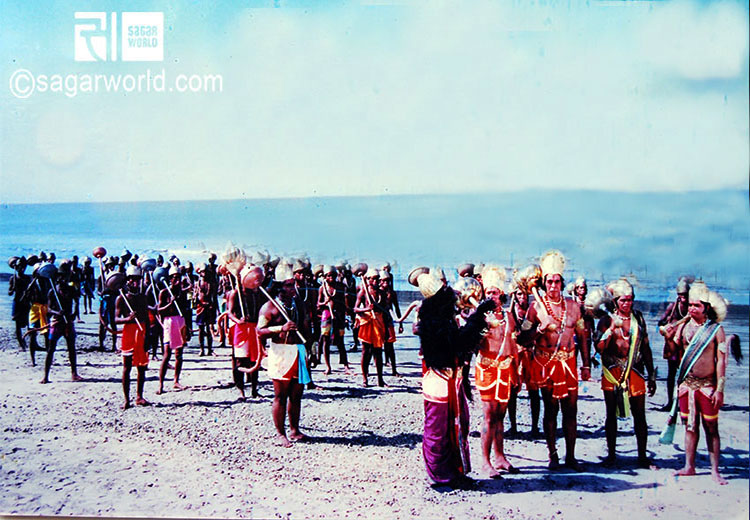 Hanuman, Angad and Jambvant, along with other monkeys, started their search in the southern direction. While traveling, they reached a cave in a mountain while in search of water.

There they met a Yogini with celestial powers, who was deep in meditation. They told her about their search for Sita.

With her divine powers, she first assuaged their hunger and thirst and then transported them in a moment to the edge of the sea. Her name was Swayamprabha. They were amazed by this miracle.

At the seashore they met Jatayu’s brother Sampati, who was saddened to hear about his brother’s death. Sampati told them that Ravan had carried Sita away to Lanka.

Because of the help that he gave to the messengers of Ram, Sampati found his burnt feathers regenerated and his wings restored, and he was able to fly once more.

The divine monkeys were now perplexed how they would get across the ocean to Lanka. They could not jump the distance of 100 yojanas (1 Yojana =8-10 miles).

However Jambvant reminded hanuman of his celestial strength, an ability that he had forgotten due to the curse of a Rishi.

When he was reminded by Jambavant, Hanuman could then use his powers, and so he assumed an enormous form, climbed to the top of a hill and leaped in the air over the ocean to Lanka.

Story of Sursa and Simhika

On the way he  encountered Sursa, the mother of snakes, who wanted to eat him up.

As soon as she opened her mouth, Hanuman became larger. This went on and on till she could not open her mouth any wider.

Hanuman then took on a very tiny form and quickly entered her mouth and came out again.

Sursa was merely testing Hanuman’s strength and ability, however, and she blessed him that he would succeed in his mission.

After that, a demoness called Simhika came in his way. She used to catch hold of the shadow of the birds flying in the air and trapping them by this means, would kill and eat them.

She caught Hanuman’s shadow too and he could no longer move ahead. But he fought and defeated her, and continued on to Lanka.

Once he reached the shores of Lanka, he began his search for Sita.

Hanuman meets Sita and the Burning of Lanka – Chapter 10

Hanuman meets Sita and the Burning of Lanka - Chapter 10