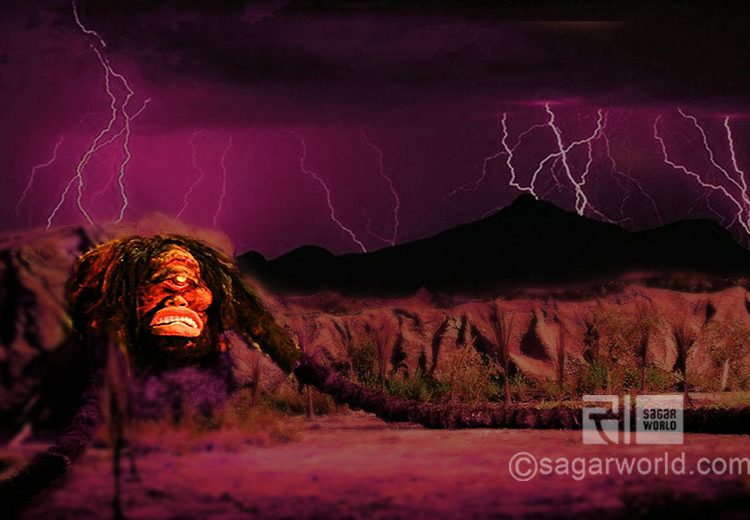 Kabandh Rakshasa (demon) lived on the west of Jansthan, towards the ashram of Matang Rishi. When Ram and Lakshman were roaming in the forest in search of Sita, they heard a terrible roar as soon as they crossed Kranchvan (Kranch forest) Suddenly a fierce wind started to blow, and the forest shook with thunder. Shri Ram saw a horrible Rakshasa whose head was inside his torso, and his arms were stretched out for the length of one yojana (1 Yojana = 8-10 miles) each. He gathered Ram and Lakshmana in his long arms.

He lifted Lakshman up in one arm and Ram in the other. With a loud bellow he made a move as if to devour them. But Ram and Lakshman moved quickly and cut off his arms with their sharp swords.

As soon as his arms were cut, he fell to the ground. While falling, he cried out “Hey Ram! Please arrange for my final rites to be completed before sunset so that I can be free from the curse that is on me. As soon as you burn me on the pyre, I will assume an astral form, and will then be able to guide you on your way ahead.” This is the demon Kadambh.

He told them that he had been a gandharva previously, and had been playing the Veena (musical instrument) before the Sage Durvasa. “He was not happy with my recital so I laughed aloud, mocking him. Durvasa then cursed me to become a Rakshasa. As a rakshasa, I began to harass the sages living in the forest. Then, Sage Shulashira cursed me to have this grotesque form.”

“With severe penance, I have acquired the boon of a long life from Brahma. This made me vain and I then dared to attack Indra. In a rage, Indra threw his weapon Vajra (the divine thunderbolt) at me.

The impact of that menacing weapon made my thighs go into my torso and pushed my head down into my chest. Because of the boon of long lifespan I had requested, I did not die.

“I had become ugly by the earlier curse of Sage Shulashira. Now with my head in my stomach and limbs pushed in, how would I be able to feed myself? I begged Indra to help me. So Indra made my arms long – as long as one yojana (1 Yojana = 8-10 miles).

He said that in the Tretayuga (one of the four periods the earth goes through each extending for millions of years before creation is destroyed by the great Pralaya (deluge) and started all over again) when Ram spends his exile in the forest, he will pass by this spot and when Ram–Lakshman cut your arms off, you will be freed from the curse. You will leave your rakshasa form and become a gandharva once more. Since only the torso remained of my body, I was called Kabandh.”

As requested by Kabandh, Shri Ram and Lakshman dug a deep hole and put Kabandh in it. Then they covered him with twigs, leaves and hay and set it aflame. As soon as the body of Kadambh Rakshasa was touched by the fire, a divine being appeared from it.

He sang the name of Shri Ram and said, “Please go in the Western direction towards the ashram of Sage Matang. The aged Shabari is awaiting your arrival so that she can have your darshan before she leaves her earthly body. She will be able to help you in your search for Sita.” After this, the Gandharva (celestial being) youth went skywards on his way to heaven.