Baglamukhi -the goddess who paralyzes enemies 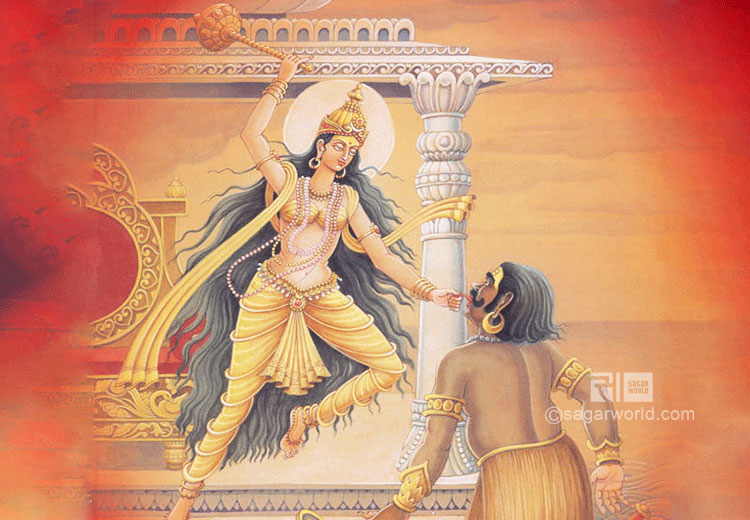 Bagalamukhi is a form of Hindu Goddess Shakti. She is one of the ten Mahavidyas or Wisdom Goddesses. Bagla means a bridle and mukhi means mouth. This means one who siezes the mouth or tongue of her enemies, or who paralyzes enemies. The goddess holding the tongue of an Asura (demon) is a symbolic representation of Goddess who seizes the evil.In the Satya Yuga,a great storm started destroying creation. Lord Vishnu was disturbed and performed austerities to appease the goddess Parvati on shore of HaridraSarovar, the lake of turmeric. Pleased with Vishnu, the goddess appeared and brought forth her manifestation Bagalamukhi from the lake. Bagalamukhi calmed the storm, restoring order in the universe.

Once a demon called Madan performed great penance and got the boon that whatever he said would come true. After receiving the great power he started troubling the innocent and the pious ones. All the humans and the gods prayed to Adi Shakti and the supreme Goddess, took the form of Bagalamukhi who pulled out the tongue of the demon to still it. When Bagalamukhi was about to kill the demon, he surrendered to the goddess and asked her to bless him to attain an exalted position. Since then he is also depicted with Bagalamukhi.

Goddess Bagalamukhi is the one who paralyzes the three worlds, the fierce Goddess who stops every movement at the right time, with the Vak siddhi (the power of the word) silences the mouths and words of all evil beings and controls their tongues. It is she who gives power to dominate enemies, mastering all situations and power over obstacles. Bagalamukhi is also known as Pitambara-devi or Pitambari, ‘She who wears yellow clothes’. The yellow colour is an integral part of the rituals dedicated to Her, so the sadhakas wear yellow clothes to perform the ceremonies and the offering are yellow too.

She is believed to have immense power and potency, which can turn things around in no time. She is also seen as representing the dualities and opposites, like ignorance and knowledge, silence and speech, and defeat and victory.

Though mighty, she is a compassionate mother. Sincere devotion earns her blessings for the devotees, which can protect them from many major difficulties in life, like poverty, disease, accidents, evil designs of enemies and legal issues. She can paralyze evil energies, foil the plans of the enemies of devotees and also protect them from the malefic effects of planets Mars, Rahu and Ketu.

Here, ‘Goddess Baglamukhi’ is printed on coated matt paper by inkjet printer, using ultra chrome inks with an off-white paper mounting with golden border, and encased inside a fibre frame with acrylic sheet cover in the front