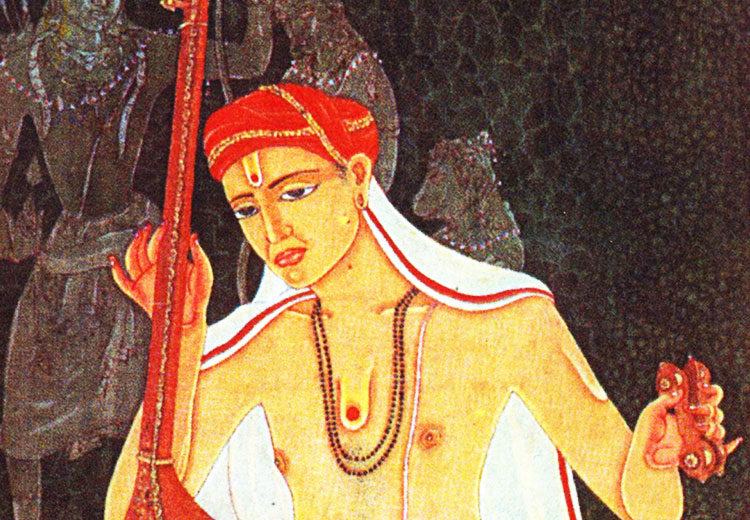 Sant Tyagraj was a great poetic saint of the Carnatic music tradition. The mixture of words, emotions and music that was found in his bhajans was fascinating for anyone’s mind. A devotee of Shri Ram, Shri Tyagraj, with his musical creations has not only given a direction to Carnatic music but has also taken it to new heights. He has written songs in thousands and filled it with music of invariable love of God. He was known as the king of Carnatic music. With his pleasant music, he had established such a sovereignty of Rambhakti (devotion for lord Ram) which after so many years is as attractive as it was back then.

Shri Tyagraja was born in Tiruvar on the banks of the river Kaveri of Tanjore district in Tamilnadu in the month of May, 1767.  His father’s name was Kakarla Ramabrahmam and mother’s name was Sitamma. His parents were great devotee of Shri Ram. It is said that Tiruvar temple’s Lord Tyagraj had come in to his dreams and blessed him saying that he would be a father of a very bright son. After the name of Lord Tyagraj, his parents named him Tyagraja. His full name was Kakarla Tyaga Brahmam and was from a Telugu Brahmin family.

Shri Tyagraj had got his primary education in music at home from his father. Later, he took further education from great music teacher Sonti Venkataramanayya and became a scholar in music in all aspects. For Shri Tyagraj, music was a medium of expressing the emotions of devotion. He used to sing to express his love for God and not to show off his knowledge in music. At a very young age, he had composed his first song “Namo Namo Raghavayya” in Rag Todi.

Since childhood, Shri Tyagraja used to visit temples along with his mother and sing bhajans there. People used to love his bhajans. Gradually, he came out as a great singer and a musician. Once his guru, Sonti Venkataramaya called him over to perform at his house in Thanjavur. There, Tyagraja sang one of his Panchratna creations “Endaro Mahanubhavulu”, in Shri Rag. Hearing this, his guru was so pleased that he discussed about Tyagraja’s caliber with the king of Thanjavur. The King sent his men with many gifts to Tyagraja and sent an invitation to come to king’s court. The king wished that Tyagraja remains in the court and sing for him. But Tyagraja rejected King’s invitation because he only wanted to sing for his beloved God Shri Ram.

Angry with his refusal to the King, Tyagraja’s brother threw the idol of Ram that Tyagraja worshipped daily in to the river Kaveri. Tyagraja, deeply hurt with this incident, left home. He visited all the pilgrimages of South India. Wherever he went, he used to sing bhajans praising Lord in the temple. This way he composed infinite devotional songs.

Shri Tyagraja used to sing bhajans in love and praising Shri Ram and perplexed with emotions he used to forget the world while singing these. It was because of this eternal love that he could have a glimpse of God every now and then and he could even talk to God. Since his heart was full of divine love for lord, his songs had unique divineness.

The King of Travancore wanted to adorn him with the post of “Sangitacharya” (master of music) but once again Shri Tyagraja sent him a message saying, “Maharaj, the real post is sadbhakti. Love in Lord’s feet is the highest position. I don’t want any other position.”

Tyagraja was a devotee of the same stature as Narad, Pundalik and Prahlad for whom singing was not a medium of entertainment but a way to attain salvation. He wrote thousands of songs and made it musical but unfortunately only few hundreds of them are available now. Tyagraja has also composed musical plays in Telugu namely “Prahalada Bhakti Vijayam” and “Nauka Charitam”. Of these, “Nauka Charitam” is very famous.

This greatest singer, musician and composer of devotional music, died on 6th January 1847 on the Pushya Bahul Panchami day.

Even today, in fond memories of this great singer saint, a music festival is organized in Thiruvaiyar wherein singers, composers and musicians of Carnatic music from all over the world get together and pay their homage by singing their own composed songs.

In the world of Carnatic music, “Great” is a very small word to describe poetic saint Tyagraja.