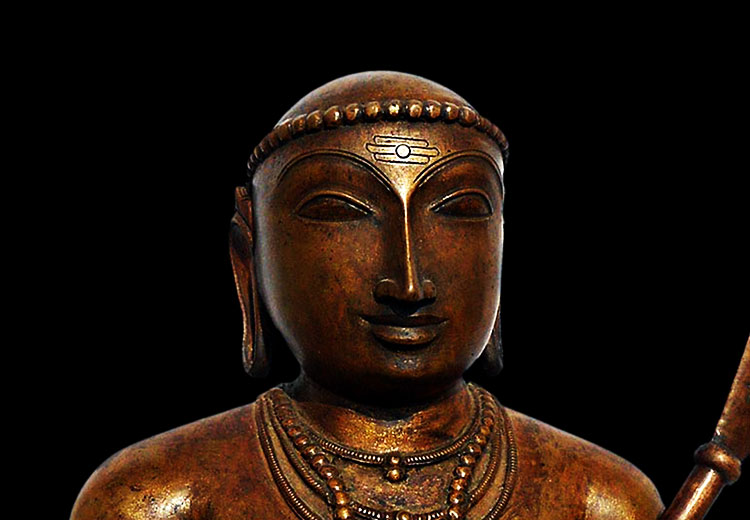 Sant Appar is one of the greatest Shiva devotees of South India. He had written around 4900 poems in devotion of Shiva of which only 3130 padas (poems sung in praise of God) are available. His padas are compiled in a book named Tirumurai. Padas of Sant Sambandh and Sant Sundarmurty are also included in Tirumurai. In this, Shri Appar’s section is called Tevaram. Sant Appar is one of the 63 Nayanars; Shiva devotees of Tamilnadu.

Shri Appar was born in the 7th century (exact birth year is considered to be 600 AD) in Vekal family of a small village of the Dakshin Arkat district of Tamilnadu. His childhood name was Marulnikkiyar. His parents died when he was very young and so his elder sister nurtured him.

After finishing his primary education, Saint Appar went to Kanchi for further studies. In those days, Kanchi was the stronghold of Jain sect. Here, he came in contact with Jain scholars and embraced Jainism. He was considered a bright child amongst Jain scholars. Appar was educated about Jainism by Jain Rajguru. After some time, he was down with a grievous disease. None of the treatment was working. There seemed to be no way to save his life. In this condition, his sister told him to go and pray in a Shiva temple and that he would be cured. At this, Shri Appar went to the Shiva temple and prayed with all his heart. Lord Shiva was pleased with his prayers and he was cured. Not only this, Lord Shiva blessed him that since that day he would be known as Tirunavukkarsar and that his speech would be blessed by Devi Saraswati. After this, he became a great devotee of Lord Shiva. He got consecrated by his family priest in Shiva’s worship and then started strong penance. Pleased with his penance, Lord Shiva gave him his darshan.

Slowly and gradually, Sant Appar became famous. Many Shiva devotees started coming to him. Appar use to sing his own creations of praises for Shiva and also always cleaned and served in the temple. When the Jain monks of Kanchi came to know that Appar had become a devotee of Shiva, they became very angry and they complained to the King about this. The King considered Appar’s devotion for Shiva as an insult to Jain religion and announced the death sentence to Appar and ordered to throw him off a mountain. By the orders of the King, Appar was thrown from the mountain but by the grace of Lord Shiva, he fell on a tree and he comfortably slept on it. Thousands of people who had come to see his death were shocked to see that there was not a single bruise on his body. King Mahendravarman was angrier as Appar survived and he ordered he be thrown in the sea by tying him with a stone. But just as he was thrown in the sea, the stone slipped out and drowned in the sea and Appar was brought to the coast by the waves. The King was once again shocked knowing that in spite of throwing him in the sea, Appar was saved. He was impressed with his devotion towards Lord Shiva and he became his devotee and surrendered to him. This way, the King who wanted to punish Appar ended up becoming a Shaivite.

Sant Appar travelled to all Shaiv pilgrimages while campaigning for Shiva worship. Wherever he went, he would clean the Shiva temples, would serve Lord Shiva and pray him with the padas (poems in praise of lord) that he had created.  Devotees in large number used to walk with him.

He met Sant Sambandh in Chidamabaram. Sambandh addressed him Appar with respect, meaning “Father”. Post this, he became famous by the name of Appar.

Later, Sant Appar had started living at Tirupukalur  Shiv temple. Here, his enemies planned a conspiracy to malign him. They sent many beautiful girls to distract him. But every girl who went near him became a devotee. People also tried to trap him in the greed of money but this saint had no greed for anything in this world except for the devotion of God. In the end, his enemies also became his devotees.

Shri Appar used to pray Lord Shiv with all his heart. According to him, Devadhidev Mahadev is the only God of this universe and all living and nonliving things in this universe are subservient to Him. Human beings can attain Him only after serving Him with mind, body and soul.

Sant Appar was one of the great leaders of Shiv devotion campaign in South who had impressed all of South India with his devotion and created a new crave for devotion within the people of South India.

At the age of 81 years at the Shiv temple of Tirupukalur this great devotee left his physical body for his heavenly abode.