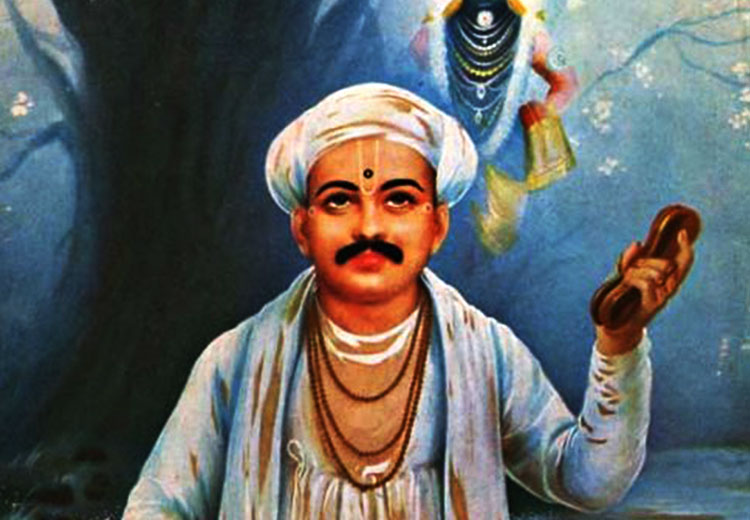 Sant Tukaram, who made proud, the tradition of Sant Gyaneshwar, Naamdev and Eknath and the greatest saint of Maharashtra was born in 1608 AD at Dehu on the banks of river Indrayani near Pune. As such, few people believe his birth year to be 1577, 1598 or 1609. His father’s name was Bolhoba and mother’s name was Kanaki. He was the second child of his parents out of three sons and two daughters.

Shri Tukaram’s family was rich and he lived a very good childhood. When he was thirteen years old, he was married to a girl named Rakhumai. But Rakhumai had severe asthama and so Shri Tukaram’s parents got him married again. The name of his second wife was Jijabai.

When Tukaram’s father became old, he thought of giving the responsibility of his business and house to his elder son. But his elder son, Savji was of disinterested nature and so all the responsibilities came on to Tukaram’s shoulder. That time, his age was only seventeen years but then also he managed everything with great efficiency.

For four years, he managed the responsibility of house and business successfully. First his mother and father died and then elder brother’s wife died. After the death of his wife, elder brother Savji who was already disinterested became an ascetic and he left the house and went for pilgrimage. Now, even Tukaram’s heart broke and he lost all enthusiasm in the household. With this, the business became slow and taking advantage of this, the debtors stopped returning his money and the creditors kept asking him for money. This way, the business got affected and the time for bankruptcy came. Around two times, his in-laws helped him but once the business was affected it never came back on track. All his efforts did not pay off. To add to his misery, Pune regions had a severe famine. Many people died fluttering without food and water. Seeing all these, Tukaram’s mind filled with sorrow. Just then, his troubles reached its pinnacle. His first wife died and then, his son.

But after all these difficulties, Tukaram came out as an image of asceticism. He handed over his younger brother his share and became engrossed in singing bhajans and praying. After great difficulties, Sant Tukaram’s mind and heart became absorbed in reciting the Lord’s name forever. By the grace of God, whenever he used to sit down for kirtan with people, he used to start saying Abhang Vani on its own. Seeing the greatest sense in his creations, great Saints and Brahmins respected him and started bowing to him.

With the fame of Sant Tukaram, many people were upset. Of this, one Brahmin who was a great scholar of Vedas, felt very bad that a person like Tukaram of the other caste sings Abhangs and all the castes including Brahmins believe him and respect him. That is why he told a hakim (a learned man) to order Tukaram to leave Dehu and go away. At this, Tukaram went to Rameshwar Bhatt and told him, “The Abhangs which I say are said by the orders of Lord Pandurang. You are a Brahmin; with your orders I will stop creating Abhangs but what about those Abhangs which are already made and which are kept written?” at this the Pandit asked him to throw away those Abhangs in the river.

Tukaram did the same as per the orders of the Brahmin but he was very upset with the idea that he would not be able to write or sing Lord’s Abhangs. His heart was in so much trouble with this that he stopped consuming food and water and sat down on a stone in front of Vitthal temple saying either Lord should meet or he would die. Tukaram sat on the stone for 13 days and 13 nights without eating or drinking. In the end, pleased with his devotion, God appeared in front of him in the form of a child. Tukaram bowed at his feet and lifting him, God embraced him. Blessing him, he told Shri Tukaram, “The Abhangs that you have created, I have kept them safe in the river Indrayani. Today, I have given it to your devotees. After the glimpse of Lord in front of him, Shri Tukaram lived for fifteen years on this earth and till the time he was alive, he continuously sang Abhangs. People were gratified listening to his edification. Many became Shri Tukaram’s disciple. Even Chhatrapati Shivaji Maharaj wanted to become his disciple but Tukaram knew that Samarth Ramdas was Shivaji’s guru and that is why he advised Shivaji to go into his refuge.

On the second day of dark fortnight of Chaitra month in Samvat (the year of Vikram era) 1706, Shri Tukaramji left for heavenly abode. No one saw his dead body, actually he did not die. Lord personally took him to Vaikuntha along with his physical body. This way, after going to Vaikunthdham, Shri Tukaram appeared in front of his devotees. There are many monuments of Tukaram Maharaj in Dehu and Lohgaon. His Abhang –Vani is a precious and eternal religious asset. Shri Tukaram lives within his devotees through his Abhangs.

Shri Tukaram said, “There cannot be anything pure in his world that is created by the Creator. Just like water in ice and yarn in cloth, God is contained in this whole universe and that is why to consider anything impure in this world is an insult to God.”

Sant Tukaram also said, “Where there is a meeting of God, saints and prayers, there is the real Triveni Sangam. According to him, even Brahma cannot describe the happiness of Satsang.