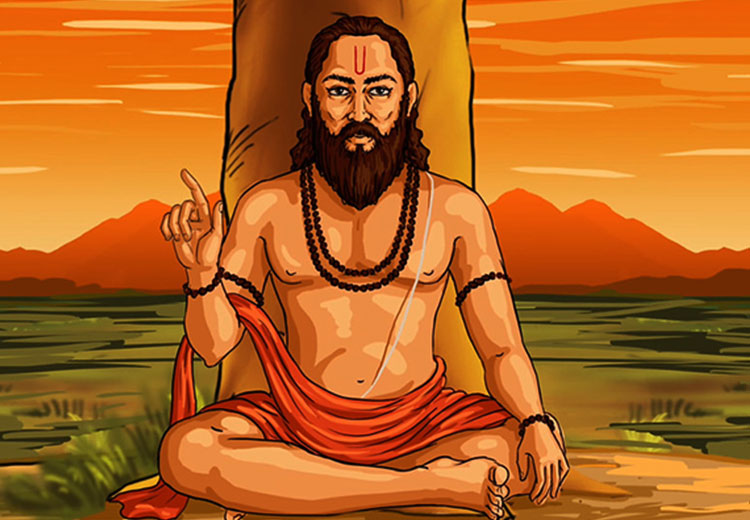 Samarth Guru Ramdas was an inimitable Saint of India who had created a religious awareness as well as started the movement of national and cultural awareness and was the guru and guide of Chhatrapati Shivaji Maharaj. He was born in 1608 on Ramnavami in the Jamb village of Aurangabad district in Maharashtra. His father’s name was Suryaji Panth Toshar and mother’s name was Renukabai. His parents had named him Narayan.

When Narayan was five years old, his investiture with sacred thread was done. In his childhood, he loved sports. But he had learnt writing, reading, accounts and daily routine prayers at early stage. He used to meditate since a very young age. In childhood, while he was meditating in a closed room and became engrossed meditating, his mother asked what he was doing, he replied that he was praying for the welfare of the world. Hearing this, his mother was very pleased.

This feeling of welfare of world which was seen in Shri Ramdas in childhood went on increasing as he grew up. It is said that Shri Ramdas used to bow to Surya Dev 2000 times a day. He pleased Hanuman at the age of eight years and had a glimpse of Shri Ramchandra. Shri Ramchandra had personally consecrated him and named him Ramdas.

When he was twelve years old, preparations had started to get him married. In the pavillion of marriage ceremony, putting a cloth between the bride and the groom, the Pandit started saying the mangalacharan Shlokas. After the first mangalacharan, when everybody said “Shubh-lagna savadhan”, Shri Ramdas became savadhan (on guard) and ran away from there with a speed of light.

After running for 3 miles, Ramdas swam across river Godavari and walking on the banks of river, reached Panchvati in Nashik where he started doing purascharan (repeating the name of a deity) of Traydashakar (13 letter) Ram mantra “Shri Ram Jai Ram Jai Jai Ram”. After finishing the purascharan, he once again had a glimpse of Shri Ram. It is said that after giving him his darshan, Ram had ordered him to visit all the pilgrimages and then go to bank of Krishna.

As per the orders, Shri Ramdas visited all the pilgrimages. During his journey, wherever he went, he established a math (a monastery) at each place and in each math, appointed one of his disciples as the head of the monastery.

After the pilgrimage, Shri Ramdas reached Paithan where he came to know that his mother had lost her vision as a result of crying all the time. Hearing this, Shri Ramdas immediately went to his mother and the moment he touched her eyes with his hands, she got her vision back. After this, Shri Samarth made her hear Kapil Gita and seeking her permission, set out.

After twelve years of penance and twelve years of pilgrimage, as per Shri Ram’s order, Shri Samarth reached the banks of Krishna in Vaishakh month of Samvat year 1701 and lived at Mahuli Kshetra. Here, renowned saints came to meet him. Badgaon’s Jayram Swami, Nigadi’s Rangnath Swami, Bramnaal’s Anandmurty Swami, Bhaganagar’s Keshav Swami and Shri Samarth himself, all these five together are known as “Das-Panchayatan”.

After sometime, Shri Ramdas came from Mahuli to Kanhad and five miles away from there, near Shahpur he started living in a cave of a mountain. Shri Samarth built “Pratap Maruti Mandir” in Shahpur. From there, he came to Chafalkhore where the Subedar (governor) was so impressed with him that he got consecrated from him and became his disciple. Also, his sister Rakhumai, along with her two sons Ambaji and Dattatreya dedicated themselves to Samarth’s feet.

Shri Samarth built 11 Maruti temples. He built Shri Ram’s temple in Champavati. In 1702 (Samvat) at Masur, Shri Ramdas announced the start of celebration of the festival of Ramnavmi. After this, celebration of Ramnavmi started at other places also. This was like a new awakening for the society. With this, Hindu powers started uniting. During those days, Shivaji Maharaj was trying to establish Maharashtra as Hindu religious state. Hearing about the fame of Samarth Ramdas, Shivaji went in to his feet and became his disciple.

In the year 1706 (samvat), in Shinganwadi near Chafal, Shri Samarth accepted him as his disciple and gave him the mantra, “Shri Ram Jai Ram Jai Jai Ram”. Chatrapati Shivaji used to keep his guru’s shoes on to his throne and rule according to his advice only. Shri Ramdas always told him to rule the state thinking its Ram’s state and not his as he was a representative of Lord Ram in the form of a king whose duty is to serve his subjects.

Shri Samarth had 1100 disciples of whom 300 were women. Shri Ramdas sent his disciples in every corner of India for the publicity of Hindu religion. This impressed Hindus all over India. His “Maths” in North India directly or indirectly greatly helped Shivaji in his work.

On the Magh Krishna Navmi in the year 1862, Samarth Ramdas prepared for Mahaprayaan (to die) and he sat down in front of Shri Ram’s idol. After this, he recited the word “Har-har” 21 times and the moment he uttered Shri Ram, a light came out of his mouth and merged in to the idol of Shri Ram.

Samarth Ramdas, with his supernatural powers was Samarth (capable) of doing anything. That is why people called him Samarth Ramdas. Because of cruel policies of Muslim rulers when the Sanatan society was being suffocated, the role Shri Samarth played for upbringing of Hindu religion cannot be described in words.