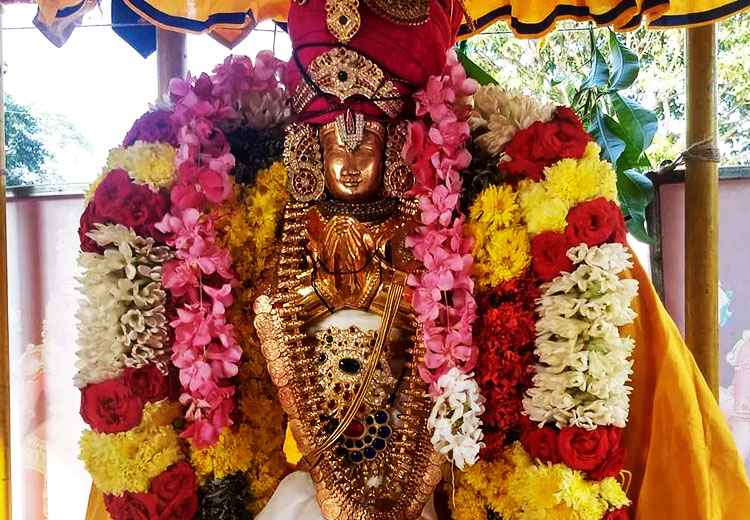 Shri Raja Kulshekhar Azhwar was born in Punarvasu nakshatra on Shukla Paksh Dwadasi of the Falgun month at Cholpattan in Kerala. His father’s name was Dhidavradhan and mother was Nadhanayagi. His father was the King of Chera Rajya.

Shri Kulshekhar is believed to be the incarnation of Shri Vishnu’s “Kaustubh Mani” (jewel). Traditional scholars believe his lifetime to be 3102 BC but modern scholars believe him to be born in 8th century. In spite of being a King, because of his devotion, he became famous as one of the twelve Vaishnav Azhwars.

Shri Kulshekhar was extraordinary in learning, knowledge and devotion. He was a great scholar of Tamil and Sanskrit language. He had studied all the religious books that were written in these languages. He had complete knowledge of Vedas and was an expert in politics, war tactics, art and science of archery, ayurveda, science of music, dance and all 64 arts. Kulshekhar was a great King who had established “Ramrajya” (the golden rule) and made his state a heaven in view of money, knowledge and satisfaction.

Although he had the royal sceptre in his hands, his heart always thumped for Lord Vishnu. His body used to sit on the throne, but his heart had become the throne of Lord Ram. In spite of being the King, he was not interested in his subjects, he always thought when would the day come when he will have a glimpse of Shri Narayan.

Really one day, Shri Kulshekhar got a glimpse of Shri Narayan. Hearing his heart, one night Shri Narayan in his divine form came in front of Kulshekhar. Seeing Shri Narayan in front of him, Kulshekhar lost his senses. Since that day, the condition of his life changed. He lost interest in ruling the state. He started thinking as to what was he doing in between terrestrial people. “Apart from Vishnu’s worship, everything else in this world is in vain. I must only be in the company of devotees.” Thinking thus, he started spending his time with devotees, bhajan, meditation and listening to Lord’s divine characterization. His tutelary deity was Shri Ram whom he worshipped with great devotion.

Lot of hurdles come even on the road of devotion. When his courtiers saw that the King was delving deeper and deeper in his worship, they tried many ways to get him away from worshipping. They even planned a conspiracy but Shri Kulshekhar’s devotion went on increasing and in the end, he handed over the state to his son and set out for pilgrimage and wandered around different pilgrimages singing bhajans with his group of devotees.

He lived in Shri Rangam Kshetra for many years. While living there, he wrote a book named “Mukund-mala” in Sanskrit which is respected by people who know Sanskrit language even today. After this, he lived in Tirupati. He visited pilgrimages like Mathura, Vrindavan, Ayodhya and all the pilgrimages of North India and also created many padas on Shri Krishna and Lord Ram. He has written lullabies for Ramlala, written about the misfortune of Mata Devaki who, in spite of giving birth to lord Krishna, was deceived from seeing him grow up. He has also written padas in Tamil language. The meaning of few of his padas is:

“I don’t want money nor body, nor I want to earn from the state, I don’t want the position of Indra and I don’t want the highest position. The only wish I have I live being a ladder of your temple and your devotees step on to me again and again. Or O my lord, I want to be a small dust particle on the road from where your devotees walk through to have a glimpse of you, or make me the water which passes through the pipe used to water the tree in your garden or make the champa tree of your garden so that I can worship you through my flowers.”

After spending all his life worshipping, Shri Kulshekhar Azhwar left for his heavenly abode leaving his physical body at the age of 67. Even today, he is a great inspiration for the Vaishanav devotees.