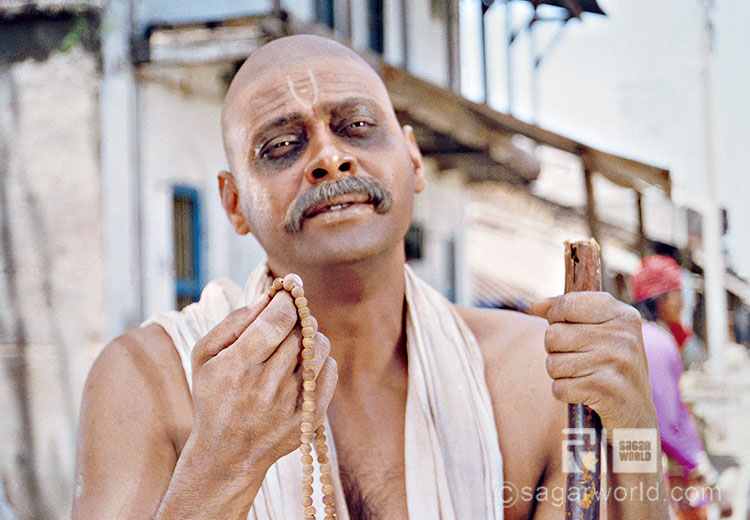 Krishna and Sudama had studied together at Sandipani’s ashram in Ujjaini. There, they became best friends. Sudama knew the Vedas and Shastras, was an ascetic and a quiet person.

The friends at Gurukul (school) were separated after education. Sudama went to his half broken cottage and became busy thinking of Krishna all the time and Krishna went to his palace and started living as a king.

Poverty had captured Sudama’s house but both Sudama and his wife were engrossed in their devotion towards Krishna, even in their poverty they found happiness.

Many a times, Sudama used to tell stories of his childhood. One of them was once Guruma (wife of their Guru/teacher) gave Krishna and Sudama parched grams to eat. Sudama was very hungry, so he ate all the grams alone. When she asked Sudama, he told her the truth and she was very angry but Krishna pacified her.

On seeing this, Sudama considered Krishna as his desired God. Thus, a Yadavendra (from Yadava family) became a Brahmin’s God. Sudama had the knowledge of Shastras (ancient Indian texts) and so had recognised Krishna.

He considered him worthy of worship. It is said that because Sudama ate the grams of Krishna’s share, he had to bear double poverty.

Once, his wife came to know that Dwarka King Krishna is Sudama’s friend. She kept on asking Sudama to go and meet Krishna. She said, “Krishna is your friend, he is a king, he is very merciful and always ready to help those who come in his refuge.

He is God; he looks after the well being of people, specially educated poor people.

If you go there, you will meet your old friend and seeing you in the sorry plight; he will be in tears and will help you.”

After saying this, his wife borrowed four handfuls of rice from the neighbour and sent Sudama.

On his way, Sudama was tired and went to sleep under a tree, when he opened his eyes and inquired, he came to know that he was in the city of Dwarka.

He took Krishna’s name and started walking towards the palace. The watchmens at the gate stopped him .

They were far neater and cleaner than Sudama. He told them to go and tell Krishna that Sudama had come to meet him.

As soon as Krishna heard Sudama’s name, he came running out to meet him. Both the friends met like milk and water. Krishna removed the thorns from the feet of Sudama.

In the spirit of great Indian hospitality and as a sign of great respect, Krishna put Sudama’s feet in a dish to wash but just as he was pouring water, he started to cry and Sudama’s feet were washed with his tears.

After this, Krishna snatched the rice packet which Sudama had hidden under his armpit.

After Krishna finished eating two handfuls of rice, Rukmami stopped him and asked. “Do you want to become Sudama also? Keep two handfuls for him.”

Later, Sudama left in the same dress as he had come. Krishna walked few steps to leave him.

When Sudama reached his town, he started looking for his cottage; just then his wife came out like a queen and said, “How come you are in this condition?” Sudama saw that whatever he saw in Dwarka, everything was the same here.

This was possible with grace of Lord Krishna. Shri Krishna kept his friendship intact and made Sudama as rich as himself and did not even let him fell that he was doing a favour to him.

This was the friendship of Krishna and Sudama. The God and devotees are inseparable. There is never a difference between them.

In India it is very common to refer to the friendship of Krishna and Sudama, as an example of great friendship and brotherhood because inspite of there being so much difference in the social status between them, they both were true to their bond.