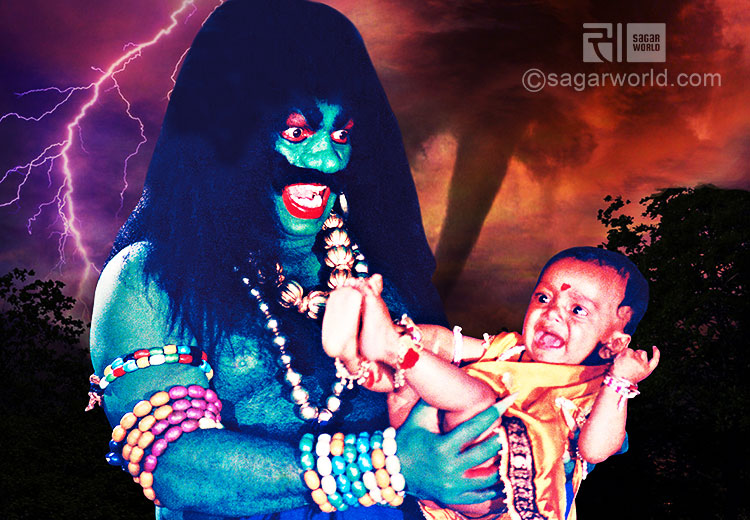 In Kans’s army, there was a demon named Trinavart. He was like a typhoon .Since Kans knew that the eighth born child of Vasudev and Devaki was alive and living in Gokul, he sent Trinavart to kill him.

As soon as he entered Gokul, a blanket of dust lay heavily on the town and it seemed as if the sun had already set and night had begun.

Trinavart saw Krishna lying in the cradle; he picked him up and went high in the sky. Yashoda was frightened when she did not see her son in the cradle.

In the sky, Krishna made himself as heavy as iron. Trinavant was tired and breathless and just as he was trying to throw away Krishna, Krishna caught him with his neck and pressed it so severely that he lost breath and died falling in the center of Gokul.

As people gathered around, they saw a giant demon lying dead on the ground and Bal Mukund (Krishna) playing on his chest.

Just as Yashoda came to know, she came running and took Krishna in her lap. She called Pandits for exorcism. She got muttering of “Narayan Kavach” (a charm) done for Krishna’s protection. Thus he protected Narayan (Krishna) with ‘Narayan Kavach.

Hence Trinavart was one of the many Asuras (demons) who failed in their mission to kill Shri Krishna when he was a helpless infant.