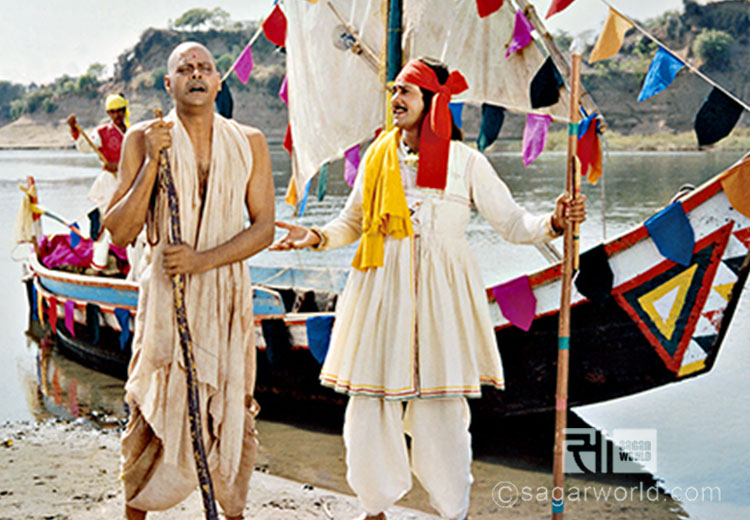 On his wife Vasundhara’s persistence, Sudama went to the king’s court. The king asked him to sing a song. Sudama started singing a bhajan. At this, the king got very angry and punished him.

After getting hurt, Sudama returned home and his wife told him to leave his ideology and be practical. She told him,

“On my persistence, you could go to the court of an amorous king then why can’t you go to Krishna?

Shri Krishna is God and you are his devotee, why should a devotee feel ashamed to go to his God?” Sudama’s wife gave him a handful of rice to gift to Krishna and Sudama left for Dwarka with the rice.

Sudama doubted whether the guards of the palace of Dwarka would allow him to meet Krishna and the second thing was whether Krishna would recognise him or no? With this thought running in his head, Sudama marched towards Dwarka. Sudama was very tired, hungry and thirsty.

Shri Krishna met him on his way in disguise of Murli Manohar to support him. He asked Sudama to have food. He served food on a leaf, and Sudama remembered his hungry family and got up without eating.

He thought that when his children were hungry, how he could have food? Just then a miracle happened.

Sudama’s friend Chakradhar went to Sudama’s house with food but his wife refused to take it as she knew that Chakradhar had got that food by flattering the amorous king and she could not accept it.

Just then a miracle happened, the nearby state king on the birth of a baby boy, ordered to give food to all the Brahmin families around the state.

With this, ten days of food was sent to Sudama’s house. Sudama was satisfied when he heard this and even he had food with Murli Manohar.

Shri Krishna explained to him the meaning of love and told him that devotion is truly a big thing but it should also be done lovingly. Devotion done lovingly was always successful.