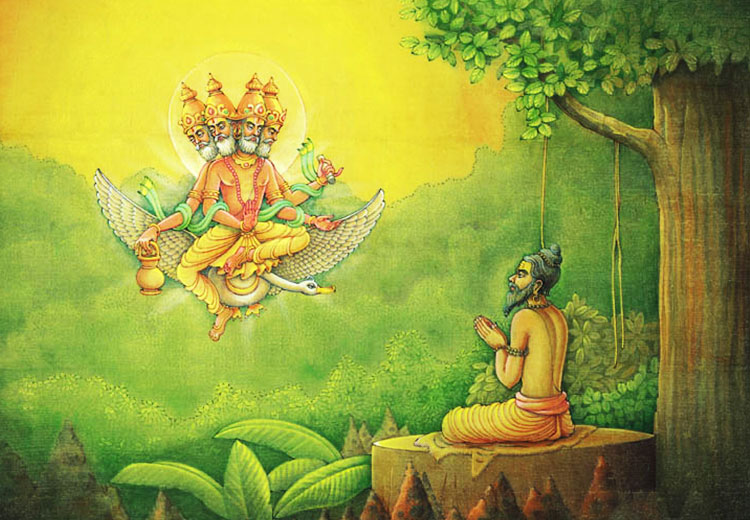 Ganga was born from the holy water in Lord Brahma kamandal water that Lord Brahma obtained by washing the holy feet of Lord Vishnu when Vishnu was in his dwarf(Vaman) incarnation as Brahmachari,” Kapila told Anshuman.

“Because Ganga was born from that holy water, she has the power to purify any object that touches her holy water.

At present Ganga dwells in Swarga Loka and the other upper lokas, but by pleasing Lord Brahma with austere penances you could obtain her as a boon and bring her to Earth.”

Anshuman thanked Sage Kapila, took the horse, and went back with a heavy heart to his father’s kingdom.He met his father and his father’s ministers at the gates of the city.

King Sagara was deeply saddened by Anshuman’s news. Sagar decided to hand over his kingdom to Anshuman, his only remaining son, and went to the forest to invoke Lord Brahma.

The creator of the universe, in order to bring Ganga to Earth. Unable to achieve this goal, Sagar left his mortal body.

In due course of time Anshuman handed over the kingdom to his son and went to the forest to perform penances to invoke Lord Brahma.

Anshuman also could not achieve this goal and left his mortal body. Now this pattern became a routine of the kings of the Sagar Dynasty.

Each king ruled until his son became responsible enough to run the kingdom and then the king would inform his heir about the task to be fulfilled, retire to the forest, and worship rigorously to invoke Lord Brahma.

In the seventh generation of King Sagar was born a boy whose name was Bhagirath.

Bhagirath was called by his father when his father was on his death bed and told about the responsibility of fulfilling the task that one after another of his ancestors had not been able to fulfil.

Bhagirath made a promise to his father, saying, “I will invoke Lord Brahma and bring the divine river Ganga to Earth. Do not worry, O Father.

I will get the sins of my ancestors eradicated.”Bhagirath then left his throne and crown in the charge of his wise and honest ministers and went to the forest.

He entered a state of Sadhana, a deep, austere, and highly disciplined worship. He sat like a rishi under a tree, completely absorbed in his meditation of Lord Brahma. His looks changed.

His beard and hairs grew, and his body started glowing from the radiance produced by his austerities.

Lord Brahma was pleased with Bhagirath’s tapasya (penance) and appeared to him in person, saying, “Bhagirath, my son, I am happy with you.

You have achieved what your ancestors have been trying to achieve for many years.

Ask me for your desired boon.”“Grandsire, my ancestors have been invoking you for several generations because we need Ganga to come to Earth. Her holy water alone can eradicate the sins of our ancestors who were burned to ashes by Sage Kapil.

Please bestow upon us the purifying Ganga who resides in your kamandal.” “I have no objection to releasing Ganga,” Lord Brahma said, “but if I simply release her from my kamandal the force with which she will descend will overwhelm the Earth. You will have to worship Lord Shiva first. When Lord Shiva agrees to hold the