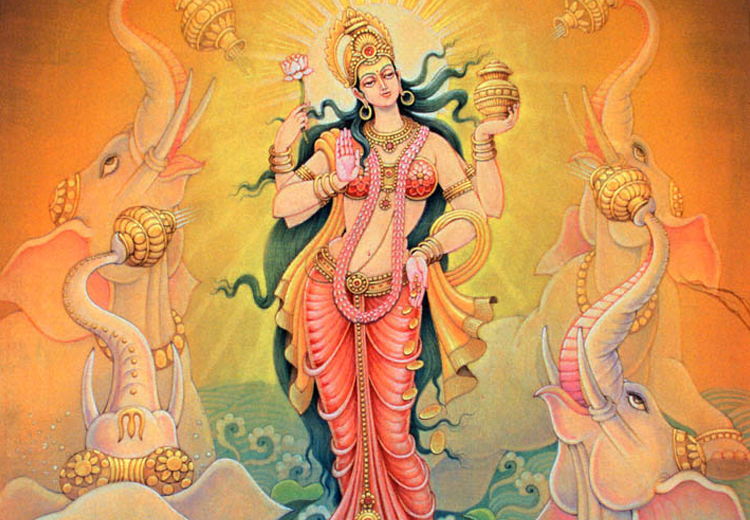 Lakshmi Goddess of Wealth is the daughter of Bhrigu and Khyaati, and was resident in Swarg, but due to the curse laid on her by Durvasa, she left Swarg and made Ksheersagar her new home. When the deities and demons churned the ocean, fourteen jewels emerged and Laxmi was one of these jewels. Vishnu took her as his wife. Golden coloured and with four hands, Laxmi resides in the Ksheersagar with her husband Vishnu.

”Lakshmi is the Goddess of wealth and prosperity, both material and spiritual. The word ”Laxmi” is derived from the Sanskrit word Laksme, meaning “goal.” Laxmi, therefore, represents the goal of life, which includes worldly as well as spiritual prosperity.”

In Her images and pictures, Lakshmi goddess of wealth is depicted in a female form with four arms and four hands. She wears red clothes with a golden lining and is standing or sitting on a lotus. She has golden coins and lotuses in her hands. Two elephants are shown next to the Goddess.

This symbolism conveys the following spiritual theme -The four arms represent the four directions in space and thus symbolize the omnipresence and omnipotence of the Goddess. The red color symbolizes activity. The golden border (embroidery) on her red dress denotes prosperity. The idea conveyed here is that the Goddess is always busy distributing wealth and prosperity to the devotees.The lotus seat, which Laxmi is standing upon, signifies that while living in this world, one should enjoy its wealth, but not become obsessed with it. Such a living is analogous to a lotus that grows in water but is not wetted by water.

”The four hands represent the four ends of human life: Dharma (righteousness), Kama (genuine desires), Artha (wealth), and Moksha (liberation from birth and death). The front hands represent the activity in the physical world and the back hands indicate the spiritual activities that lead to spiritual perfection.”

Since the right side of the body symbolizes activity, a lotus in the back right hand conveys the idea that one must perform all duties in the world in accordance with dharma. This leads to moksha (liberation), which is symbolized by a lotus in the back left hand of Laxmi.

The golden coins falling on the ground from the front left hand of Laxmi illustrate that she provides wealth and prosperity to her devotees. Her front right hand is shown bestowing blessings upon the devotees.

The two elephants standing next to the Goddess symbolize the name and fame associated with worldly wealth. The idea conveyed here is that a true devotee should not only earn wealth merely to acquire name and fame or only to satisfy his own material desires, but also should share it with others in order to bring happiness to others.

According to tradition, the Goddess of knowledge, Saraswati, and the Goddess of wealth, Lakshmi, were never fond of each other; that is why a scholar is seldom wealthy.  has said that even though Lakshmi is the Goddess of money, wealth and prosperity, she does not stay for long with people who are arrogant because of their wealth and good fortune. That is why Laxmi bestows her blessings only on those who are devout in the long run.

Laxmi’s carrier is an owl, a creature who cannot see well by day, but sees well at night. According to the popular tradition, on Deepavali, while worshipping Laxmi, the main door of the house is left open and a light is kept so that Laxmi’s carrier, the owl, does not have a problem finding a way into the house. The owl is also a mysterious animal very difficult to spot but who sees all (like Laxmi) and very reclusive.

”Out of the ten incarnations of Shri Vishnu, Krishna’s incarnation was one of them. In the Dwapar age, during the time of Shri Krishna, Laxmi incarnated as Radha. Mention of Laxmi is found in the Vedas also.”

On the full moon night following Dusshera or Durga Puja, Hindus worship Laxmi ceremoniously at home. It is believed that on this full moon night the goddess herself visits the homes and replenishes the inhabitants with wealth. A special worship is also offered to Laxmi on the auspicious Diwali new moon night.

Devis are very mysterious in Hindu culture and religion. Very few cultures have given so much importance to female worship. The most important portfolios have been given to the female goddesses; their male counterparts are not seen as active in the world as the female counterparts. Also concepts such as Durga (combination of Laxmi, Saraswati and Kali) and Adi-Mata (the original female goddess from whom the entire universe took birth) highlight the importance of Goddess worship in India.