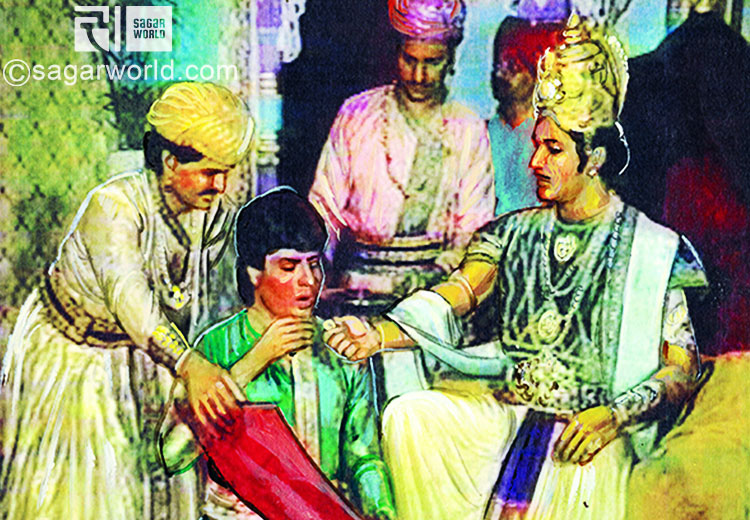 Yet again King Vikramaditya started walking with Betaal on his shoulders for another night and Betaal started off…On the seacoast was a town named Tamralipi , where a young man named Satvasheel was roaming around for some days trying to meet King Chandrasen for a job. But the King’s staffs would not allow him to meet the king. 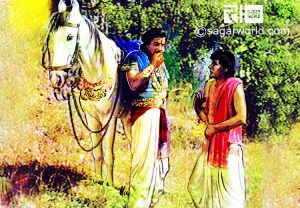 As the king stopped,Satvasheel came up to him .The king asked him his name, and then asked him for water. Satvasheel went and got some water from a nearby pond, making a bowl out of some leaves. He then offered some gosseberry and chickpeas to the king. 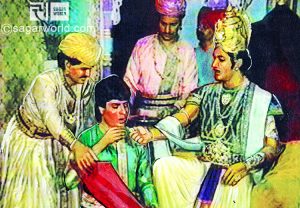 The king then asked Satvasheel as to what he could do for him. He said that it was his desire to serve the king, and he had been trying for many days to meet the king, but the guards of the king were not allowing him to meet the king.

The king then gave him a ring with the state insignia engraved on it and told him to come to the palace with it and if he showed it to the guards, they would immediately let him in.The next day Satvasheel went to the palace, and the king appointed him to serve him. Satvasheel served his master with all dedication. 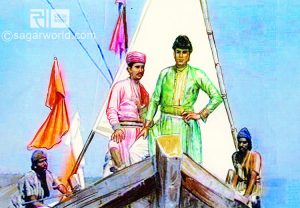 Once while out , King Chandrasen told Satvasheel that there were many unemployed youths in their country and the reason for that was lack of business. If they could start some businesses with nearby islands and countries , then it would help to reduce the unemployment.

But for that, someone was needed to go and search out the islands, approach them, and try to make deals with them. For that one had to be dedicated and courageous.  Satvasheel told the king that he was ready to go.King Chandrasen gave him a boat and crew, and Satvasheel, with several associates, started off. While they were sailing across the water, he saw a flag hoisted on a pole stickling out of the water. 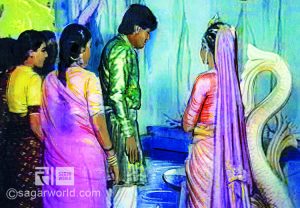 King Chandrasen had asked him to search for all islands and countries nearby. Satvasheel thought that as the flag was hoisted in the middle of the sea ,there had to be something underneath. He jumped into the water and went down.

There he saw a beautiful woman sitting with other ladies listening to music.

Satvasheel told her that he had come from King Chandrasen’s country. She then asked him to rest, and then offered him a bath before taking his lunch.He was taken near a small pond and was pushed into it. When he came out, he saw it was a large pond and King Chandrasen was infront of him. Satvasheel was surprised as to how he reached there. 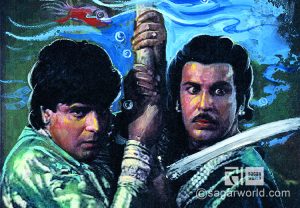 Satvasheel was the more courageous of the two, and justified his answer by saying that when Chandrasen had jumped into the sea where the flag was hoisted, he knew what was under it already, as he had heard the full story from Satvasheel. But when Satvasheel had jumped, he knew nothing about what would be there awaiting him. But he did not worry about it and just went ahead. So he was the real courageous.Betaal praised Vikram’s justification but as he once more opened his mouth, Betaal flew away.