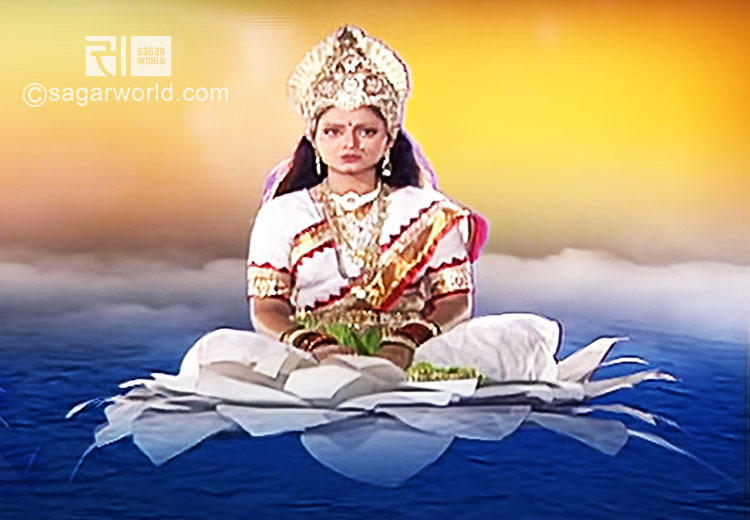 The daughter of Himavan, the personification of the great Himalayan Mountains, and the heavenly nymph Maina.

She is also the sister of the sacred river Ganga. Uma is considered as the goddess of ‘light’ or the “Lady of the Mountains”.

She is an ancient Mountain-goddess who imparts the vital virtue of balance to humanity. She has always been depicted as a beauty with  power.

”Devi Uma trinity goddess is also the ferocious form of Durga according to the Hindu scriptures. She has been given the tag of a mediator, as she would always resolve the conflicts of heaven.

In her previous life, Devi Uma Trinity Goddess was the daughter of Daksha Prajapati, and was named Sati.

”Her father Daksha had organised an enormous Yagya but deliberately did not invite Lord Shiva, who he disliked. Sati went to the yagya uninvited; there, upon seeing her husband Shiva being insulted by omission, she got very angry and denounced Daksha, then threw herself into the sacrificial fire.

”In her next life, she was born as a daughter to Giriraj Himalaya and his wife Mainavati. Himalaya and Mainavati were overjoyed with their beautiful daughter, who came to be known as Uma. Uma observed tremendous penances to obtain Lord Shiva as her husband.

Seeing her perform her staunch penances, her mother was very much worried and told her Uma which means “don’t do this!” Since then she came to be known as Uma. Pleased with her worship, Lord Shiva married her.

Apart from being Shiva’s consort, Uma is also believed to be Shiva’s strength.

It is believed that there is a portion of Uma existing in Devi Bhagwati Shakti. Pooja of Shiva is considered incomplete without Devi Uma’s pooja.

According to the description in the Puranas, the demon king Pralayasur acquired ruinous strength and power, and tried to destroy the grandeur of heaven and also tried to kidnap Devi Ganga, but Devi Uma trinity goddess foiled him.

”When demon king Hiranyakashyap wanted to kill his son Prahlad, who was a devotee of Vishnu, then also Devi Uma protected Prahlad.

Devi Uma was in fact the protector of the interests of the devtas and that is why all the devtas have great faith and devotion in Devi Uma.”