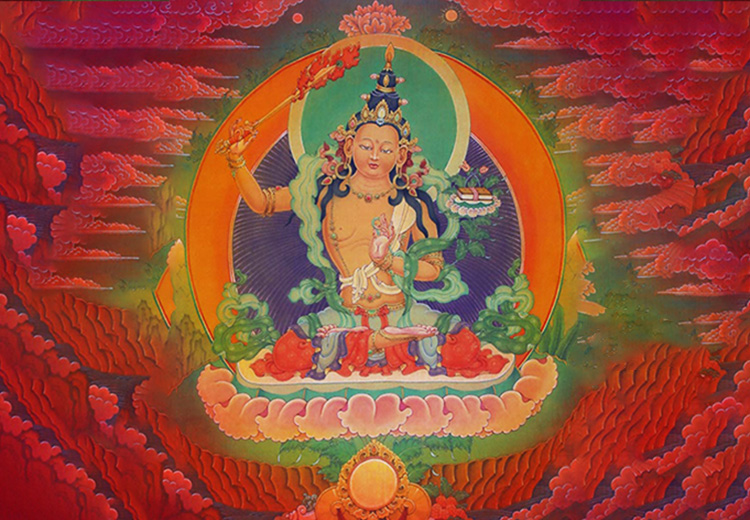 Manjusri means one who is noble and gentle. Manjusri is a meditational deity. He is known as Bodhisattva of Wisdom. Manjusri is associated with meditation, poetry and writing. He is depicted as holding a blooming lotus in one hand and wielding a flaming sword in another. The blooming lotus represents purity and compassion and the flaming sword represents wisdom which eradicates ignorance.

Manjusri, in Mahāyāna Buddhism, is the bodhisattva (“Buddha-to-be”) personifying supreme wisdom. His name in Sanskrit means “gentle, or sweet, glory”; he is also known as Mãnjughoṣa (“Sweet Voice”) and Vāgīśvara (“Lord of Speech”). In China he is called Wen-shu Shih-li, in Japan Monju, and in Tibet ’Jam-dpal.

He is said to manifest himself in many ways—in dreams; as a pilgrim on his sacred mountain; as an incarnation of the monk Vairocana, who introduced Buddhism into Khotan; as the Tibetan reformer Atīśa; and as the emperor of China.

Manjusri is identified as the oldest and most significant Bodhisattva in Mahayana Buddhism literature. In early Mahayana texts called “Prajnaparamita Sutra”, referred Manjusri as the embodiment of transcendent wisdom. Vimala, a pure land assigned to him by Lotus Sutra, is considered as the one of two best pure lands existed in the past, present, and future. Manjusri is considered as a fully enlightened Bodhisattva and is greatly respected and worshipped as a “ Meditational Deity ”.

Here, ‘Manjusri Buddha’ is printed on coated matt paper by inkjet printer, using ultra chrome inks with an off-white paper mounting with golden border, and encased inside a fibre frame with acrylic sheet cover in the front.