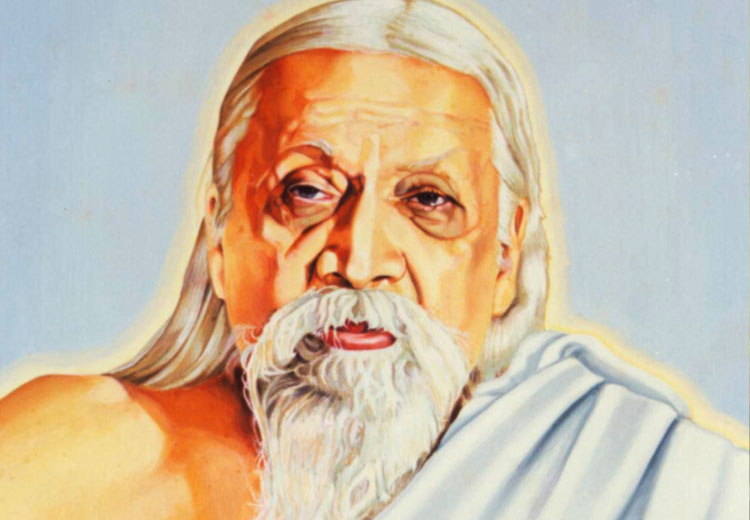 One who had strongly believed in undivided India, a patriotic, freedom fighter, poet, philosopher and a great Yogi, Shri Aurobindo was born on 15th August, 1872 in Kolkata. His father’s name was Dr. Krishnadhan Ghosh and mother’s name was Swarnlata Devi. Shri Aurobindo was the third child. He had two elder brothers namely Vinay Bhushan and Manamohan. He had a younger sister named Sarojini and one more brother younger to her named Varindar Kumar Ghosh.

His father was completely influenced by English culture that is why at the age of five, he sent Shri Aurobindo to Darjeeling’s Loretto Convent School for studying. After two years, in 1879 he went to Manchester in England for studies. There, Aurobindo studied at Saint Paul’s school first and then at Kings College. Here, apart from English, he also learnt languages like Italian, German and Spanish. During this time he also created interest in writing poems.

In San 1890, Aurobindo passed I.C.S. exams but his heart was not ready to accept the fact that he would work for the British and so he did not appear for horse riding exam and so he was disqualified for I.C.S. At this time, Baroda’s King Sayajirao Gaikwad III who was on tour to England, met Aurobindo and he got a job at Baroda state. He left for India from England. At this time, his father, who was waiting for him in India, an agent from Mumbai informed him that the ship in which Aurobindo was travelling had drowned near Portugal. His father was shocked to hear this and died.

While working at Baroda, first in the survey and settlements department, then revenue department and then King’s personal office, Aurobindo deeply studied Indian culture and religion. He also learnt Sanskrit, Hindi and Bengali language which he could not do while studying at England. Seeing his interest in languages, King sent him to Baroda College as a French lecturer where he became very popular because of his different styles of teaching. Later, seeing his growth, he was appointed the vice principal. He published his first poem compilation named “The Rishi from Baroda” while in Baroda. While working here, he also started participating in the India’s freedom movement.

In April 1901, Shri Aurobindo got married to Mrinalini Devi. Mrinalini was the daughter of Shri Bhupal Basu of Brahmosamaj.

Shri Arvind was calm, quiet and humorous but he had a deep love for his country within which he considered as a divine blessings. In one of his letters to Mrinalini, he had written, “People consider the country as a good as a ground, field, river but I consider my country as my mother. I am devoted to her, I worship her. If any demon sits on my mother and wants to drink her blood, it is my duty to protect her.”

Around 1901-02 Aurobindo got Yatindranath Bannerji enrolled in the army of King of Baroda so that he could learn the military rules and give training to boys in Bengal for arms revolution. In those days he even took secret oath of Krantikari dal (revolutionary group). While giving continuous movement to the revolutionary movement, Shri Aurobindo published a magazine named Vande Mataram and regularly wrote about national awareness in the magazine. He started writing and talking about total freedom of India. The British got very angry with this and arrested him but Aurobindo continuously remained leader of the freedom movement group. In May 1908, the British once again arrested him for Alipore Bomb Case. After the prosecution for one year the judge let him free because there was no connection of him with this bomb case. During this time, Shri Aurobindo took a vow of perpetual silence and regularly performed meditation. After this, his mind got inclined more towards spiritualism. In his letters, he has written that it was that he met the soul of Swami Vivekanand who for two weeks told him the details of spiritualism. During his imprisonment, Shri Aurobindo had become so spiritual that he visualised Lord Krishna in jailor, prisoners, guards and judge. After coming out of the jail he started two magazines, one in Bengali named “Dharm” and other in English named “Karmyogi”. Later, with Lord’s intuition, on 1st April, 1910, he left Kolkata and reached Pondicherry.

After reaching Pondicherry, Shri Aurobindo completely dedicated himself to spiritualism. Here, he established Aurobindo ashram and after four years of deep yoga and meditation, he started publishing a magazine named Arya. It was through this magazine that he started putting forward his thoughts and articles to people. Slowly and gradually his fame increased and not only in India, but all over the world his name became famous.

Shri Aurobindo also exhibited his spiritualism by the medium of his Poems. Out of his collection of poems, the most important is the poem named “Savitri” wherein through the story of Satyavan and Savitri he exhibited his spiritualism. Apart from Savitri, he has written inspiring and amazing books like Urvashi, Love and Death, The life divine, Synthesis of Yoga, Secrets of Vedas, Essay on Geeta, The Human cycle and The ideal of human unity.

The theory of Yoga that Shri Aurobindo established is not for achieving salvation but to awaken divineness within human beings. He worked all his life for attaining divineness through yoga and guided people for the same. A French woman named Maan Mirra greatly supported him for this work.