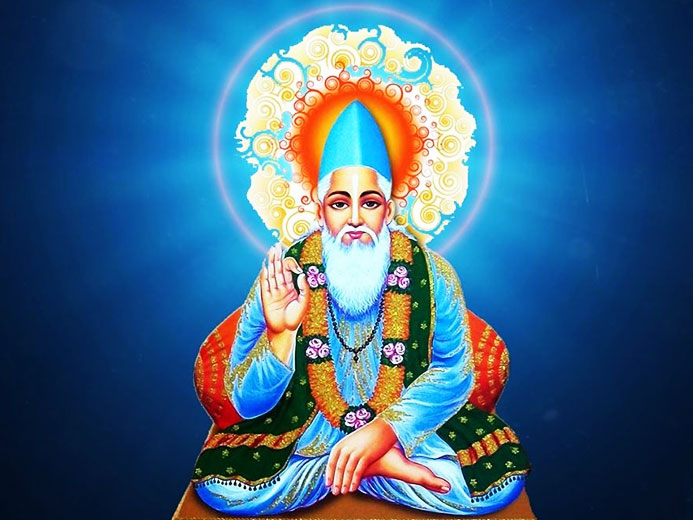 The greatest Saint with absolute devotion, Kavi Shri Kabir is one of those Saints who in his times directed the society to a new direction and with his thoughts and life style, influenced crores of people. He was such a personality of Indian Culture and religion who continuously attacked the bad customs and showed the humanitarian religious and easy way to reach God.

There are many different stories prevailing about the birth of Shri Kabir and about his parents. According to one story, Swami Ramanand once unknowingly blessed a widow lady to be a mother and Kabir was born from the womb of this lady. Out of shame to face the society, the lady threw the new born in to Lahartara Lake. There, he was found by a weaver couple named Niru and Nima who took the child to their home and nurtured him. According to Ahmed Shah, Shri Kabir’s actual father’s name was Swami Ashtanand but due to the fear of Hindu customs, he did not accept Kabir’s mother. Some followers of Kabir believe that he was born divinely on to the lotus flower in the Lahartara Lake.

According to another belief, with the union of a great Saint and a celestial damsel named Pratichi, on full moon day of Jyestha month in Samvat (the year of Vikram era) 1455, Prahlad took birth in the form of Kabir. This way, there are many stories prevailing regarding the birth and parents of Shri Kabir but as far as the place is considered there is unanimous opinion that he was born in Kashi. Kabir himself in one of his poems said that he was born in Kashi.

There is also a difference of opinion regarding the year of his birth. According to Dr. Ramkumar Verma, Kabir was born in the 1455 Vikram samvat. Brahmadutt Sharma believed his birth to be in Vikram Samvat 1456 on the full moon day of Jyestha month. In “Poems of Kabir”, Ravindranath Thakur has said Kabir’s birth to be in 1440 AD.

Kabir was nurtured by Niru and Nima, the weaver couple but it is believed that one to two generations before them were Hindu untouchables. Kabir himself was above casteism. Hajari Prasad has written about him that Kabir was different from others. He was everything, Hindu, Muslim, Yogi, householder, saint, vaishnav but still was nothing.

Kabir had a great desire to be educated but he never had the fortune to learn reading and writing. He, in the name of education, learnt the art of weaving fabrics from his father with which he supported his family.

Though Kabir did not learn to read and write, he always had a craving for knowledge and so started going to saints, mendicants and hermits since childhood. His conduct was pious, with all his heart. Day and night he used to recite Ram’s name and remained so engrossed serving Saints and hermits that he used to forget about his livelihood.

Kabir was a householder Saint. His wife’s name was “Loi” who was also known as “Ramjaniya”. Many people used to get confused with this second name and thought that Kabirji had two wives which was not true. He had a daughter and a son. His son’s name was Kamal and daughter’s name was Kamali. As such, it is not been sure as if these two were his own children. It is believed that Kabir had nurtured Kamal and he was more famous as his disciple rather than his son. Kamali is said to be the daughter of Shekh Taki and eight days after her death, Kabir had taken her out from her tomb, brought her back to life and kept her with him.

The name of Kabir’s guru was Swami Ramanand. With a desire to attain knowledge he wanted to get consecrated by Swami Ramanand but he was not sure if Swami Ramanand would accept him as his disciple. Thinking that if not anything, then at least he would be able to touch the sand at his guru’s feet, he lay down on the steps of the ghat where Shri Ramanand used to come for bath in the river Ganga. In the dim light of dawn, Shri Ramanand could not see him and he stepped on Kabir.

As soon as his feet touched Kabir, Shri Ramanand stopped and asked him, “Brother, who are you? Did it hurt you?” With the touch of his guru’s feet, Kabir felt blessed and got up and said, “My name is Kabir and this was the only way to come in to your refuge.” Shri Ramanand immediately understood Kabir’s enthusiasm and accepting him as his disciple, consecrated him with Ram-mantra. Kabir travelled all around India. In spite of being a householder he went with the saints of Kashi to distant places. In the Digvijay journey (world conquest) of Shri Ramanand, Kabir was also there along with other disciples. He had visited Chitrakoot, Prayag, Mathura, Maharashtra, Orissa, Gujarat and all the pilgrimages of the states of South India.

With impressive speech and touring, Kabir gained a lot of fame in his lifetime. The collection of his poems is famous in the name of “Beejak”.  There are three main sections of this, – “Ramaini”, “Shabd” and “Saakhi”. There are many topics related to the society and culture like Vedant-tatva(theology), scolding Hindus and Muslims for their hypocrisy, blind faith, misbehavior, the transient nature of world, purity of heart, illusion, touchable- untouchable etc. There is a mixture of many languages in these poems like Punjabi, Rajasthani, Avadhi and Brij. Kabir loved a peaceful life. He was a believer of virtues like truth, nonviolence and good conduct.

Kabir had seen Lord in the form of friend, mother, father, son, husband etc. His poems clearly show his strong relationship with God. Because of his straightforwardness, saintly nature and quiet saintly life, even today, Kabir is a character of inspiration and worth honor.

In his old age, people of Kashi had made it difficult for him to live there so Kabir left Kashi and in the last days of his life he went to Magahar and took his last breath there. Even today his tomb exists in Magahar.

There are different opinions regarding the year of death of Kabir. Samvat 1501, 1502,1505,1507,1575 etc are many years that are believed to be the year when Kabir left for his heavenly abode but most of the learned people believe it to be Vikram Samvat 1505. But people also believe that at the time of his death, Kabir was 120 years old and accounting that if Kabir was born in 1455 Vikram Samvant, then the year of his death 1575 seems to be valid.

Whatever the year of birth or death of Kabir, it does not reduce Kabir’s importance. His invaluable contribution towards the society in his age is marvelous and that is the greatest uniqueness of his personality. He strived for establishing Sanatan (eternal) values in his life and for that he followed the path of coordination. His life was only for Ram who dwelled in each breath and every second of his life.