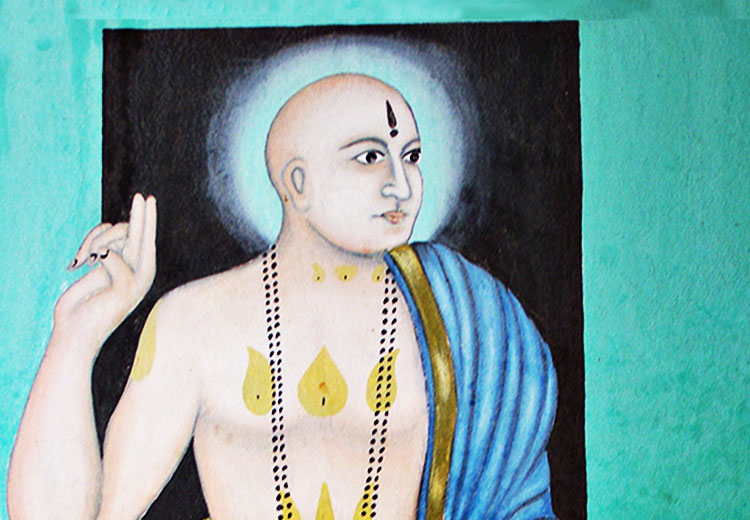 Shri Madhavacharya was born in a village named Velali (the name of his village is also said to be Pajak and Tulnud) two three miles away from Udipi in Mangalore district of Karanataka state on the seventh day of the first fortnight of Magh month in the Vikram Samvat 1295 (1238 AD). His father’s name was Nadillya Narayan Bhatt (at some places his father’s name is said to be Madhyageha Bhatt) and mother’s name was Vedavati. He was a Brahmin of Bhargav gotra. It is said that his parents had prayed a lot for the birth of a son and after that a son was born to them. Shri Bhatt named him Vasudev.

Many people believe Shri Vasudev that is Shri Madahavacharya’s birth to be on tenth day of the bright fortnight of Ashvin month but it is the day of the instalment of his theological reign and not his birth day.

Since childhood, Shri Madhavacharya was a great devotee and a supernatural genius. When he was three years old, to attend one of the occasions, he went to “Nidiyur” with his parents. Suddenly in between the function, Shri Madhava disappeared. Everyone started searching for him. On asking, somebody said that he had gone towards Kodavoor Mandir (temple). Someone else said that he has gone to Bannanjee Mandir. Searching for him, Nadillya went to both the temples but could not find him. In the end while searching, when he reached Ananteshwara temple in Udipi, he was shocked to see Madhava standing in front of the Shivling folding his hands and meditating. Seeing him, Nadillya was in tears. Shri Nadillya himself was a devotee of Shri Ananteshwara. When he asked Madhava as to how do he reach there, Madhava said, “I first went to Kodavoor temple, then Bannanjee temple and then came here.” Hearing this, Shri Nadillya was shocked to hear that how could a three-year-old child go to two temples all alone. But Madhava said, “I was not alone, God was with me. He only brought me here.”

Shri Madhava was very clever in reading and writing. Whatever he used to read once was not required to read it again. As soon as he completed three years, his father started educating him regularly.

When he was five years old, he went along with his mother to a nearby place named Neyampalli where a scholar was lecturing. But unsatisfied with his lecture, Shri Madhava proved his explanation to be wrong and said the right meaning in front of everyone and the crowd present there was stunned with Shri Madhava’s knowledge.

Once, he even surprised his father who was a great scholar by telling him the meaning of a word which even Nadillya did not know. His father was very happy with the knowledge of his son.

When Shri Madhava was seven years old, after his initiation of sacred thread, he was sent to his guru to learn Ved- shastra. His guru’s name was Totantillya, who was one of the honored teachers of Vedic tradition of those times.

Shri Madhava was not only clever in studies but also very good at sports. No one could beat him in sports and wrestling. Impressed with Shri Madhava’s brilliance especially in wrestling, his fellow students used to call him Bheem.

Once, unhappy with him giving too much time towards sports activities, his teacher scolded him and tested him for his knowledge. But contrary to what his teacher had expected, Madhava answered each and every question so fluently that his guru was impressed with his knowledge. After this, his guru never objected to his playing sports.

After being established as an Acharya, he always paid attention towards health. It is said that when he was more than forty years, to know the importance of healthy body, he had challenged his students of twenty years for wrestling and defeated each and every one of them.

Once, when Acharya was going on the tour to Badrikashram, a group of robbers cornered him. He told his disciples, “This is not the time to get scared. The hands that can lift a stick can also lift an axe. One should not get scared of bad people, instead punish them.” Hearing this, the disciples pounced on to the robbers. Seeing this severe form of the saints, the robbers ran away to save their lives.

Once while he was going on pilgrimage in the North, some soldiers of a Muslim King arrested him. The King asked him as to whether he was scared. Shri Acharya said, “Why should I get scared. The God that I pray is also your God. You call him Allah and I call him Narayan. This whole world is his state and all of us live in his state and I am going for pilgrimage through one of his states, then why should I get scared to go from his state?” The Muslim king was so impressed with his answer that he honored him in his assembly and donating him a big plot of land asked him to built an ashram over there and stay there. But Acharya Shri refused his proposal and went ahead on his pilgrimage.

Shri Madhavacharya believed for a healthy mind; healthy body is a must. So, he always encouraged his disciples to exercise.

When he was eleven years old, he expressed his wish to be an ascetic but due to his love for his son, his father did not permit him.  To stop him, his father pleaded him and bowed him at his feet. Shri Madhava just told him, “For a father to bow down at the feet of a son who is not an ascetic is not proper, but when you have already bowed, it shows that you have already accepted me as an ascetic.”  When his mother told him that if he becomes an ascetic, who would take care of them in their old age, he said that he would not accept ascetism till they have a second son and then, surprisingly his parents had a second son the next year. After this incident, his parents were compelled to permit him for ascetism. The second son took care of his parent till the last day and then got consecrated by Shri Madhava. His name was “Vishnutirth”.

After getting permission from his parents, Shri Madhava accepted ascetism by an Advait ascetic named Achyutpragya (also named Achyutpakshacharya, Achyutpreksha). After his consecration, his guru named him “Purnpragya”. Later, he was also named Anandtirth. But in the end, he became world famous with the name of Madhavacharya.

Just after some time of his consecration, pleased with his intellect, his guru had appointed him as Mathadheesh (the head of a math). After some time, Acharya toured all over India and debated with scholars at all different places that he visited. His only motive for the debate was to spread bhakti, to establish the testimonial of Vedas, to stop Mayavaad and to protect dignity. At one place, saying that the Vedas, Mahabharat and Vishnu sahastranaam has one, ten and hundred meanings, he had surprised the group of pundits present there. After writing “Gita bhasya” he went for pilgrimage to Badarinarayan and there he entrusted his bhasya to Shri Vyas. While living in Badrinarayan for some time he also wrote annotation on Brahma-sutra. Shri Madhava was the greatest scholar and writer of his times. He wrote around forty granths. In his granths, he has demonstrated the principles of “Dvaitvaad” (dualism in philosophy) which is based on the principles of “Tattvavaad”(philosophical knowledge of a subject). Apart from “Gita bhasya” and annotation on Brahmasutra, the chief granths written by Acharya are “Mahabharata Tatparya Nirnay puran”, annotation on Rigveda and Bhagvata, “Tantarasara Sangraha”, “Tithi-nirnaya”. Apart from these he has written many important books.

Acharya also mastered in the art of music. “Dwadash Stotra” is a melodious creation of him showing his musical capability. Influenced with his intellect, many kings became his followers. Many scholars, after being defeated by him in debate, agreed to his views. He had also mastered in different yogas which came out at different instances in his life. In his life, he also installed many idols. He had got three idols of Shaligram in Badrinarayan which he installed in Subrahmaniya, Udipi and Madhyatal.

Once, on the banks of river Malap, a ship had drowned. There was a beautiful idol of Shri Krishna covered with gopichandan (a kind of yellow earth used by Vaishnavas) lying in the ship. With the inspiration by God, Shri Madhava took out the idol of Krishna and installed it in Udipi. Since then, Udipi has become a pilgrimage for the followers of Madhava. The Krishan idol installed by him, blesses crores of devotees making their lives prosperous.

When somebody is doing unique work, there will be many people thinking evil for him. Similarly, to do evil with Acharya, some people stole his Granth, tried to kill him but there was so much love in his heart for humans that he forgave every one of them.

At the age of 79 years, to bring forward the work that he had done for the life time, Shri Madhavacharya set for Badrikashram taking leave from his disciples and instructing them. After this, no one has seen him. This day is celebrated as Madhava-navami where in devotees pray to Shri Acharya.

After he left this world, his disciples established many more maths (monasteries). Few of his quotes are:

Narayan is the only God. Only he is called God. Brahma, Vishnu are his names. He can be called with any name.

Vedas is the original truth. To understand this truth, we must surrender ourselves to Vedas.

Though Shri Madhavacharya has left this world but he is still present within his disciples in the form of his principles and continuously guides them to the path of salvation.