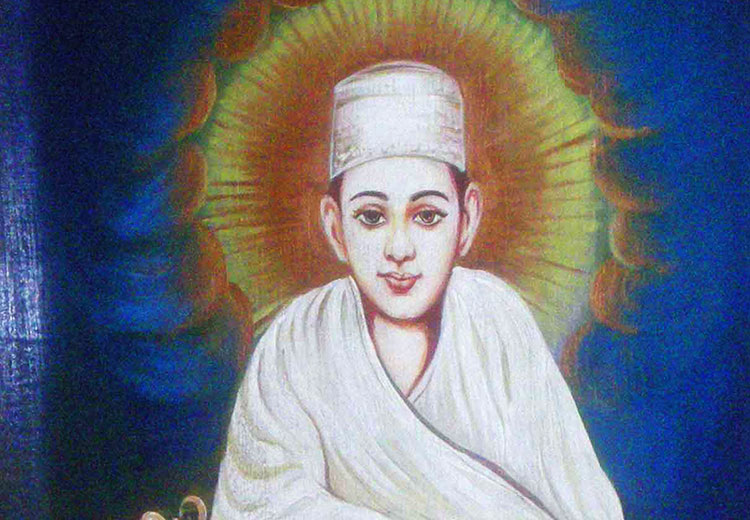 Shri Dadudayal was such a saint who with all his mind, body and soul commenced a great union and revolution in the society. Shri Dadudayal had appeared to a Brahmin named Lodhiram in Ahmedabad on Thursday, the eighth day of first half of Chaitra month in Samvat 1601. He was a Nagar Brahmin and was childless. Once he found a box floating on the river Sabarmati. On opening, he found a child in it. This child was Shri Dadudayal who was brought up by Lodhiram and his wife.

Dadu was indifferent, knowledgeable and a devotee since childhood. It is said that Shri Krishna had given him darshan as an old man and given him the knowledge on the divine philosophy.

Once Dadu set out of his house to gain knowledge and interact with good men of the society but his parents caught hold of him, brought him back and got him married. But they could not hold him in the terrestrial remand and at the age of nineteen, he once again set out of house. Wandering around, he reached a village named Sanbhar near Jaipur in Rajasthan and for survival, started working as cotton-comber. Just as a cloud cannot cover the Sun for a long time, similarly Dadu’s miraculous powers could not remain hidden and slowly and gradually people understood that he was a great saint. Dadu had acquired full spiritual realisation after strong penance for twelve years. He always remained engrossed in Yoga and prayers. Whatever he would speak would come out true but he was strongly against this kind of miracles. He used his powers only for the welfare of his followers.

In the later years, Dadu spent around fourteen years in Amber city of Rajasthan. Many different incidences are found in his life. Once, Dadu lived at Aandhi- Gram for few days. The village was suffering with famine. People of the village went to Dadu with their request. Sympathized, Dadu prayed for the village and immediately it rained in the village.

A grand ceremony was organised in the Tonk region. So many people came for the ceremony that there was a shortage of food. The organiser panicked and went to Dadu. Dadu offered the food to God and it is said that the stock of food increased so much that people kept coming and went on eating without the food getting depleted.

While staying at Amber, Dadu never went to meet King Bhagvantdas. Once, King came personally to meet Dadu and was amazed with Dadu’s spirituality.

After living for fourteen years in Amber, Dadu came to Narayana via Marwad, Bikaner, Kalyanpur etc. Here, on Saturday, eighth day of the second fortnight of Jyeshtha month in Samvat 1660(san 1603), he left his physical body. He was 58 years, 2 months and 15 days old that time.

Just before he died, Dadu had told his followers not to bury or burn his dead body but leave it on the Bhairana Mountain so that it can feed the hungry animals and birds. Dadu believed that if death is a truth, then the existence of life is a bigger truth than this. All his life, he taught to leave enmity and have a friendly approach towards all living things. This is the reason he had left the famous practice of religion and pooja and messaged to pray incorporeal God, who is present in each and every small thing. The only motto of his life was to experience the power of incorporeal God.

Previously, there was no name for Daduji’s sect but later on, his followers named it Brahm- Sampraday. But this name did not become famous with people and now this sect is known as Dadu Sampraday or Dadupanth.

As such, Dadu had thousands of disciples of which 152 are believed to be main disciples. Out of these, 100 are recluses who had no disciples or not established any math but 52 of them are such who have made disciples and established maths. That is why they are known as Thanbhadhari mahant. Narayana village is the main place of Dadupanth people and the chief mahant also lives here.

Dadu was a householder saint. He had two sons and two daughters. After the death of Dadu, his elder son Garibdas was seated on Dadu’s seat. Of the chief 52 disciples of Dadu, main were Garibdas, Sundardas, Rajabji, Jagjeevandas etc.

Dadu’s devotion is an exceptional example of true love for God. In one of his creations, he has said while praying God, “O Ram! There are many like me for you but for me there is no one like you. Never repudiate Dadu, and always remain in my eyes.”