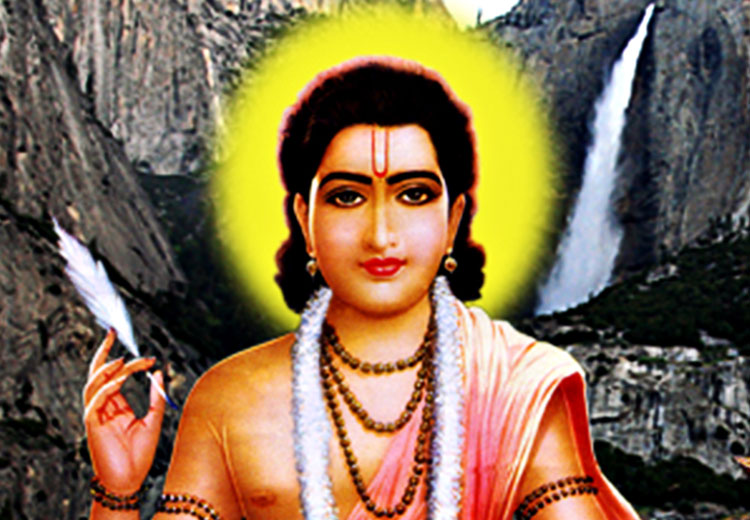 The creator of “Gyaneshwari”, which is considered as the Gita of Marathi language, Sant Gyaneshwar is one of the greatest saint and poets of Maharashtra. He was the founder of “Varkari” sect. The meaning of Varkari is the one who goes for pilgrimage. Gyaneshwar kept on going for pilgrimage. Shri Gyaneshwar was a great devotee of Lord Vitthal but he was consecrated in the Naath sect. His guru was his own brother Nivrittinath who was consecrated by Guru Gahaninath of Naath sect in a miraculous incident. Sant Gyaneshwar was also known as Gyandev.

Shri Gyandev was born on Bhadrapad Krishnashtami at midnight in the year 1275 AD in Aalandi near Paithan in Maharashtra. His father’s name was Vitthal Pant and mother’s name was Rukmini. Gyan Dev had two brothers and one sister- Nivritti Nath, Sopan Dev and Mukta bai. His father was expelled from the society. After marriage, Shri Vitthal Pant took renunciation when he got consecrated by Shri Paad Swami. But when his guru came to know that he was married, he asked him to go and live his married life. That is why, he had come back to his town but the conservative Brahmins of the village expelled him on the pretext of the rule that a person who has taken renunciation from worldly attachments cannot come back to terrestrial life. But Vitthal, for the sake of his children wanted to come back into the society and the Brahmins showed him the only way was that Vitthal must go for atonement of his sin and the atonement was –death. Hearing this, for the betterment of his children, Shri Vitthal Pant went to Prayaag and at the confluence, took water samadhi.

Now, the children were left alone. They sustained their life by begging. Whenever they did not get anything in begging, they would eat wild flowers and fast. In spite of so much of difficulties the children faced, the society remained rigid towards them and even though their father died, they did not consider them pure. In the end, for the solution of this problem, when Gyandev asked question to the Pundits of Alandi, they told him to go to Paithan and that the scholars of Paithan will take a decision for them.

When Shri Gyandev reached Paithan with his siblings, they were told to keep bowing to cows, dogs and Chandals (an inferior caste among Hindus) and then their sins would atone and they would become pure. At this Shri Gyandev replied, “We are totally sanctified, what proof you need to prove our sanctity?” Just then an angry Pundit said, “Your sanctity is as good as a buffalo reading Vedas. Just as a buffalo cannot read Vedas, similarly you can never be pure.”

Hearing this, Gyandev quietly went to a buffalo standing right there and said, “This buffalo will give the proof that we are sanctified and as a proof of this, the buffalo will recite Ved mantras. “

After this, the Pundits were forced to certify them pure but they kept a condition that none of the siblings will marry and produce offspring, else, their dirty blood will spread in to the society. This was the highest peak of the meanness of the Pundits.

After getting the certificate of purity, Vitthal Pant’s children were relieved thinking that though they would not get married at least they would live within the society. For three years, all three brothers learnt Vedas in Paithan and after this left for Newasa. On the way, a miraculous incident happened. A person named Sachidanand had died. His wife was lamenting over his death. Gyaneshwar told his brothers and guru, “The meaning of Sachidanand is – sat (truth), chit (mind), anand (happiness) – how could Sat, Chit and Anand die?” Nivritti said, “Definitely they cannot die.” And Shri Gyandev brought Sachidanand to life. Later, Sachidanand became Shri Gyandev’s disciple.

While living at Newasa, Shri Gyandev wrote his greatest granth “Gyaneshwari” which is considered as Vedas in Maharashtra. In this, Gyaneshwar has discriminated 700 Shlokas of Gita in to 9000 Ovis (verses) in Marathi language. Shri Gyaneshwar was 15 years old that time.

In addition to “Gyaneshwari”, he had created many abhangs (Marathi bhajans) like “Amritanubhav”, “Changdev Pasathi”.

When Shri Gyandev was writing “Gyaneshwari”, a Brahmin had invited him to his house on the occasion of his father’s shraddha. It is said that on inviting Shri Gyaneshawar, the Brahmins three ancestors personally sat on the seat and accepted the Pind (a round lump of cooked rice).

Gyaneshwar had performed many such miracles in his life. Out of these miracles, one was with a great yogi named Changdev who was meditating for the last 1400 years but seeing Gyandev’s contemplation, Changdev made him his Guru.

Sant Gyaneshwar’s life was full of miracles. At the age of just 21 years, he was famous all over India. His fame was discussed till Tibet, people had started worshipping him. After returning from Pilgrimage, Shri Gyaneshwar declared that he wanted to take Samadhi. Hearing about his contemplation, people from started coming to see him. Kirtan went on for two days. Then, on 25th October 1296, on the thirteenth day of Kartik, Krishna Paksh, in the afternoon, at the age of 21 years, 3 months, 5 days he took Samadhi.

In spite of being highly learned, Gyaneshwar always gave equal importance to Sagun (endowed with qualities) Brahmin and Nirgun (not possessing any qualities). He was a great ocean of experienced truths. He taught people about Karma and asked them to keep away from bad action. Gyandev has very clearly said, “The growth of humanism is the road for human to be immortal.”

“This world is not illusion; it is the body of Lord. This is body of Lord endowed with qualities.”

Shri Gyaneshwar was as good a scholar as he was a devotee and also a great Yogi. Till the time the human society is there, Sant Gyaneshwar, along with his thoughts will always be present in between us.