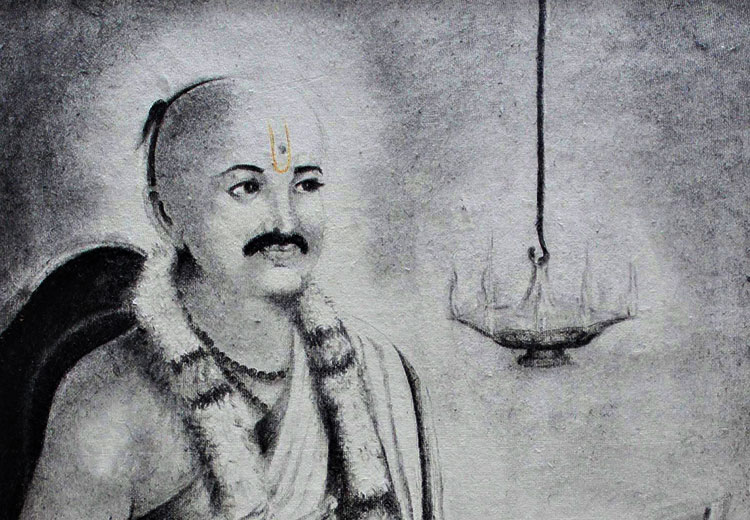 Maharashtra had many saints born here who left an immeasurable impression on the social and cultural life of Maharashtra. Sant Eknath is one of them.

After the death of his parents, Chakrapani took care of his grandson. Shri Chakrapani was a great scholar of his times. Shri Eknath was also very intelligent and had a great faith in God. He was always busy with prayers, temple and reciting Lord’s name. Because of powerful memorizing power, he speedily progressed in studies.

It is said that when Eknath was twelve years old, he was so desperate for a Guru that once while he was in a Shiv temple, he heard an oracle saying, “You go to Devgadh. Your guru Janardan Swami is there.”

After hearing this oracle, Eknath set out to Devgadh without informing anyone. After reaching there, he bowed to Shri Janardan Pant and requested him to consecrate him. Pleased with him, guru accepted him as his disciple and consecrated him. He served his Guru for six years. His devotion for his guru was immense. To serve his guru, he always slept after his guru slept and got up much before he was awake and took care the whole day so that his guru had no trouble.

It is said that Janardan Swami had entrusted him the accounts. One day, he could not tally the account of one paisa. After serving his guru, he sat down with the accounts book and kept accounting till the wee hours. In the end, when he got the account right, he started clapping. Because of the noise of clapping, Janardan Swami woke up from his sleep and when he came to know the reason for Eknath’s happiness, he said, “The devotion with which you did accounts, if you pray with that devotion, Bhagwan will personally come to you.”

Post being blessed by his Guru, Eknath was overwhelmed. After few days, by the blessings of his guru, Shri Eknath got a darshan of Lord Dattatreya. Later, his guru advised him to worship Shri Krishna and asked him to go to Shulbhajan Mountain and pray to Lord Krishna.

After the penance, Shri Eknath returned to his Guru. This time his Guru asked him to visit places of pilgrimage and publicize the religion of Lord Dattatreya. Taking the permission of his Guru, he left for the visit of places of pilgrimage. During his journey, Shri Janardan Swami also accompanied him till Nasik Tryambakeshwar. Moving ahead, Eknath visited Kashi, Mathura and all places of pilgrimage in India. During this visit, a miraculous incident happened. After taking water in a “kamandal” from Prayaag, a group of Saints were moving towards Rameshwaram to offer this water. Sant Eknath also took water and walked along with them. On the way in the dessert, a donkey was dying of thirst. Seeing the donkey dying of thirst, everyone felt pity for him but no one gave him water to drink because their water was for Rameshwaram Shivling But Eknath could not control himself and gave away all the water to the donkey. Seeing him giving away the water to the donkey which was to be offered to the Shivling, Eknath’s companions were unhappy and asked him as to what he was doing. Shri Eknath said, “Shri Rameshwar personally asking me for water and I am doing just that.”

It is said that seeing this gesture of Eknath, Lord appeared in front of him, then and there and blessed him.

After completing his pilgrimage, Eknath came to his birthplace Paithan. But after coming to Paithan, he did not go to his home and stayed back in the Pimpleshwar Mahadev temple. Because of matted hair, beard and dressing like that of a sadhu (saint), no one recognized him but one day when his grandfather came to know that Eknath is living in the temple he went to the temple and too him to home. Eknath’s grandfather wanted him to get married and continue the lineage but he did not want to get married. In the end, with the orders of Guru Janardan Swami, he had to get married and he got married to Girijabai. Girijabai was dedicated to her husband and always engaged in the performance of religious acts.

Eknath spent all his life in singing bhajans, reciting his name and propaganda of religion. He was an idol of sympathy and forgiveness. To forgive the thieves that entered his house, to forgive the Muslims who had beaten him 108 times, were all the incidents wherein Shri Eknath’s kindness and placability was clearly visible.  He also worked a lot for the Harijans (untouchables) in the society. He was against untouchability. On the day of Shraddh (the offering of water, food to the Brahmins in honor of manes), calling Harijan to his house and making them eat first; this incident was such wherein Shri Eknath’s humanity and honor for all human being is seen.

Dedicating his life for the society, culture and religion and when time came, just like Dyaneshwar, Sant Eknath also announced his journey to death. Hearing this, people from near and far came to have a glimpse of him. The whole of Paithan was singing bhajans. Then, on the fixed day, in the year 1599 (samvat), on the sixth day of Krishna Paksh of the Chaitra month, he went on the banks of river Godawari. He bathed in the river Godavari and after coming out he went in contemplation.

The final message of Shri Eknath was, “In Kalyug, the only way to attain salvation is reciting Lord’s name. If you want salvation after death, then keep chanting all the time.”

Sant Eknath has written many granths of which “Bhagvat Ekadash Skandh” “Rukmini Swyamvar” and “Bhavarth Ramayan” are the main granths. It is said that Lord Ram had personally got “Bhavarth Ramayan” written from Eknath Maharaj. Apart from these granths he had also written small granths like “Chranjivi pad”, “Swatmbodh”, “Anand lahiri” etc. he has written all his granths in Marathi language. He had also done the great job of publicizing the copy of Sant Dyaneshwar’s great creation “Dyaneshwari”.