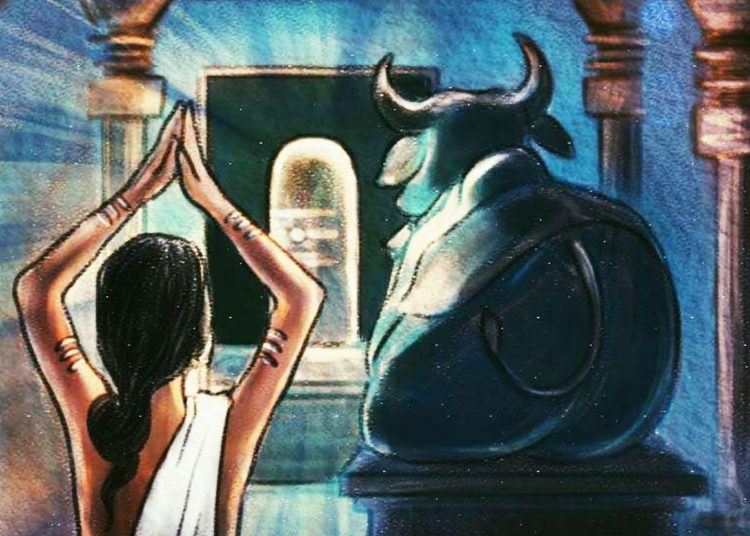 Of the 63 great Shiv devotees that are mentioned in “Periya Puranma” the religious book on Shaiv theory, Shri Nandanar is one of them. His life is an excellent example of the generosity, greatness and human morals of Shaiv Sect wherein not a person’s caste or sect but the importance of his devotion is clearly seen and held paramount.

Shri Nandanar lived at a place named Athunur (Aadanur) in Chola state. He was born in Pulaiyas Sect. He was a Harijan(untouchable) and apart from doing leather work, also farmed at a landlord’s field. He could survive with whatever he got in return. Whenever a kettle drum was to be made for the temple, there used to be a need for the leather. Shri Nandanar, with great devotion used to personally go and give the leather.  He used to feel very fortunate by doing this thinking that God gave him a chance to serve Him. Because of belonging to a low caste, he used to stand at the gate of the temple and pray from a distance. He could not enter the temple and pray for he was an untouchable. But no one stop one from devoting. Shri Nandanar used to dance with devotion outside the gate of the temple. Once he went to Thiruppunkoor for the darshan of Lord Shiva. It is said that pleased with his devotion, Lord Shiva had asked Nandi to move aside so that Nandanar who was standing at a distance could see God directly.

This way, Shri Nadanar visited various temples with great devotion.  He had a great desire to go to Chidambaram and have a darshan of Lord Nataraj (Shiva). For this, he asked for permission from his landlord but was denied. On continuous insistence by him, the landlord put a condition to plough 40 acres land in one day and if he succeeds in doing so, he will be allowed to go. For the desire to go to Shiva temple, Nandanar started ploughing but because of continuous working, he became unconscious and fell down. Just when his eyes were getting closed he thought that he would never be able to go to Chidambaram. But it is said that seeing this condition of his devotee, Lord Shiva personally came there and ploughed all the 40 acres land by evening. Seeing this, the landlord was shocked and bowed down and gave permission to Shir Nandanar to go to Chidambaram.

When Shri Nandanar reached Chidambaram for darshan, the Brahmins did not allow him to enter the temple. Seeing this behaviour of the Brahmins, Lord Shiva ordered them in their dreams saying that Nandanar was his favourite devotee and that if they do not trust his devotion they could use “Agni” to test him.

By the orders of Lord, the Brahmins lit a pyre and Shri Nandanar on fire who was engrossed in praying, thinking it to be God’s grace, entered the fire and just as he came out of the fire people saw that there was no flame of fire on his body. With this fire ordeal, his body became lustrous, his looks became like that of a Sage and dangling on his body was the sacred thread.

Seeing this, everyone was astonished and bowed to Shri Nandanar. After this, to have a darshan of his favourite God, Nandanar entered the great Chidambaram temple. After entering the temple he never came out or returned. God’s great devotee Shri Nandanar had amalgamated with God.