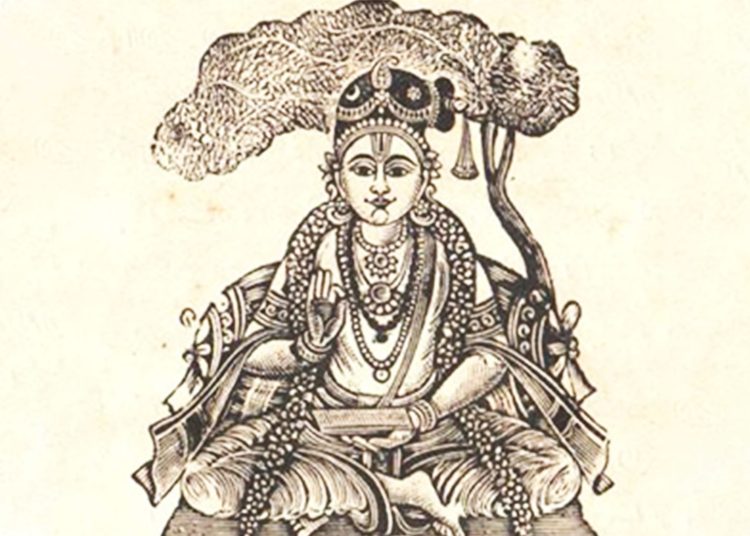 Shri Nammazhwar was born in the Vishakha nakshatra on Shukla Paksh Chaturdashi of Vaishakh month in Thirukurugoor (Shri Nagari) near Thirunelveli in Tamilnadu. His father’s name was Kari and mother’s name was Udhayanangai. Shri Nammazhwar’s father, Shri Kari, was designated at a higher post at the king of “ Pandava Desh”, a rich Zameendar and a great devotee.

Shri Nammalvar is believed to be the incarnation of Vishvaksen (Vishnu), chief of Vaishnavi (the personified energy of Vishnu) sena (a legion) whose name was “Maran” in childhood. People used to call him “Sadagopan” too.  Later, he became famous with many other names.

Shri Nammazhwar was a divine child from birth. There are claims that he never cried nor was he ever hungry, he always remained quiet (similar to baby Thirumazhisai Azhwar). Not understanding the condition of their child, the parents took him to the temple of Lord Aadhinath. One day, while they were engrossed praying after keeping the child at Lord’s feet, the child walked on his own and went to the tamarind tree in the campus of the temple and sat inside the ravine and went in contemplation. Seeing this, his parents were astonished. They understood that this child is no normal child but he is a divine, who by the grace of God came on to this earth as their son. Thinking such, they left the child there only surrendering him to lord and returned.

When people heard about a child in contemplation, they came for his darshan. Since then, for sixteen years child Nammazhwar sat in contemplation in the ravine of tamarind tree for the realization of Shri Hari. It is said that Lord Narayan appeared in front of him and initiated him with the divine words, “Aum Namo Narayanay”.

During that time, Madhurkavi who was on pilgrimage to North India, when he was in Ayodhya, he saw a beautiful cluster of light in the sky. He was amazed to see this light in the form of a star so to find out as to where the light was coming from, he walked in south direction towards the light and in the end, he reached Thirukurugoor where he came to know that this light was that of Shri Nammazhwar which was seen in the sky in the form of a ray of light.

After this Shri Nammazhwar wrote many poems filled with love for God. Many a times while creating these poems he used to go in a state of contemplation. Shri Nammazhwar lived on to this mortal world for 35 years and after this he left this physical body and left for Vaikunth (abode of Vishnu). During the period of these thirty-five years, he wrote religious books which were thoughtful, serious and instigating affection. The chief religious books written by him are, “Thiru-Viruttam”, “Thiru-Asiriayam”, “Periya Thiruvandhadhi” and “Thiruvaimozhi”.

Thiruviruttam is considered to be the extract of Rigveda, Thiru-Aisiriyam as the extract of Yajurved, Periya Thiruvandhadhi as that of Atharva Ved and Thiruvimozhi as that of Samved. In all these four books, there is a description of Shri Hari’s amorous act and all of them are filled with love for the Lord.  Of these, “Thiruvaimozhi” is the biggest book which has more than thousand songs in praise of God. “Thiruvaimozhi” hold a special place in the Tamil religious literature. Reading this is considered as important as reading Vedas.