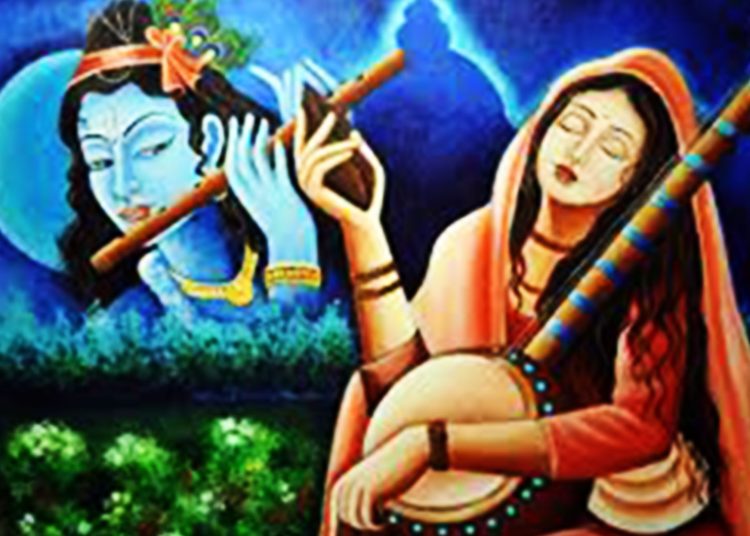 Meerabai is considered to be the greatest lady saint whose creations are sung in every house in India. – “Mere to Girdhar Gopal dusara na koi.” Meerabai is an ideal personality for every Indian, someone who had dedicated all her life for the love of her Nandlal Shri Krishna leaving aside the limitations of caste and family.

Bhakt Meerabai was born in the royal family of village Kudki (some say village Chaukadi) of Merta district (at present in Nagpur district) in Rajasthan. Her father’s name was Rathor Ratan Singh. Rav Dudaji was her grandfather, son of Jodhaji who had established Jodhpur city.

When Meera was three years old, a saint came to her house. He had an idol of Krishna which he always kept with himself for pooja. Meera wanted that idol and so she asked the saint to give it to her. The saint did not want to give it as he needed the idol for his daily pooja. But Meera was very adamant and went on hunger strike.  The saint could see an image of a greatest devotee in Meera’s obstinacy and so he gave away the idol to Meera. This way, at the age of three, Meera’s Nandlal had personally come to her.

When Meera was young, a marriage procession was passing by once in front of her house. Seeing the bridegroom, Meera asked her mother, “Maa, who is my bridegroom?” At this, her mother pointing at the Girdhar-Gopal’s idol jokingly said, “Your bridegroom is Girdhar-Gopal.” Meera registered her mother’s answer forever in her mind. After this, she always looked at Shri Krishna as her husband. It is said that when Meera was four years old, she had dreamt that Lord Krishna married her and she had told her mother about this dream.

When Meera was eight years old, her mother died and so she came to live with her grand father Dudaji who was a staunch Vaishnav. Dudaji used to tell her many stories of Shri Krishna from the books like Mahabharat and Bhagwat Puran.

When Meera was thirteen years old, her father got her married to Prince Bhojraj, son of Maharana Sanga, King of Mewar. Though in terrestrial world, Meera was married to Bhojraj but she considered herself Shri Krishna’s wife all through her life.

Because of this determination of Meera, she had to face lots of difficulties at her in-law’s house. But her love for Lord Krishna went on increasing day by day. She was all the time engrossed in pooja, reading and reciting Lord’s name. She used to invite saints in her palace and talk at length with them about lord. This kind of behavior was not liked by her in-laws. They ordered her to leave all that and behave according to royal norms.  But for Saint Meera living according to royal norms without bhajan and recollecting Lord’s name was impossible.

When Meera was twenty years old, her husband Shri Bhojraj died fighting in a war. Six months after her husband died, Meera’s father died in the Khanava war from Rana Sanga’s side against Babar. Rana Sanga was also seriously injured in the war and after few months he was poisoned by plotter ministers and he died. Due to continuous shocks, Meera started feeling this world and terrestrial life disinteresting. Her supernatural love and devotional sentiment became stronger. She remained engrossed in bhajan of Lord and always revered saints who came to the palace. It is said that during this time Meera was initiated by Shri Raidas. Often, with anklets in her legs and kartaal (a kind of small cymbal) in her hands, engrossed Meera danced in love for her Nandlal leaving all the norms of a queen.

After the death of Rana Sanga, Rana Vikramjeet became the king of Chittore. He never liked that a royal lady, crazy in devotion forgets the norms and respect of the society. According to him, dancing and singing bhajans by a widow along with other saints was not proper and so he restricted all the activities of Meera.

Being restricted in the royal palace, Meera went to temples and worshipped. Impressed with her devotion people from distant came to see her. Meera’s fame went on increasing. Seeing the inside story of the royal palace getting out, Rana Vikramjeet and his family members got angry and they brought Meera back to the palace and treated her like a captive. They offended her in all possible ways and also tried to execute her. Vikramjeet sent a glass of poison to Meera saying that it was charanamrit (water with which lord’s feet are washed) and asked her to drink it. Meera knew about the conspiracy but considering it as amrit (nectar) in the name of lord Krishna, she drank it.

As the poison did not have any effect on Meera, Rana sent a box with a snake in it to her. But when Meera opened the box, the snake turned in to Shaligram (a kind of Vishnu’s idol of black stone). At the instruction of Vikramjeet, Meera’s sister-in-law Udabai tried a lot to refine Meerabai. In this sequence, due to the anger and hate towards Meera, she was blamed for many different things and was calumniated but in the end, with the effect of Meera’s devotion, she surrendered to Meera and became her disciple.

Seeing his sister becoming the disciple of Meera, Rana deputed his soldiers to escort Meera. The escorts informed Rana that Meera was talking to an outsider man. Hearing this, Rana took out his sword in anger and went inside the temple and started searching for that man all around but he could not find him anywhere. Rana, in a fit of anger asked as to where was the man. At this Meera replied, “That man is in front of you but you cannot see him.” Actually, she was talking to Lord Krishna and only she had the eyes that can see Krishna.

Failing to stop Meera in spite of trying in many different ways, Rana to protect the dignity of the family, ordered Meera to leave Chittor and go away. After this order, Meera came to her uncle in Merta. It is said that as soon as Meera left, Chittor was struck by calamities. Muslims attacked Chittor and destroyed it and the King of Gujarat, Bahadur Shah took over Chittor.

Meera came to Merta after leaving Chittor but she could not live here for many days and once, without informing anyone, she left Merta and reached Vrindavan.

It is said that Meera was a gopi in her previous birth. After reaching Vrindavan, she felt as if she had come to her own world. Each and every place here was known to her. She sang bhajans of her beloved, roaming around in Vrindavan. Wherever she would go, crowd would gather for a glimpse of her. Infatuated with her devotion, everyone used to touch her feet and felt blessed.

Here, Meera met Jeev Goswami, a great disciple of Shri Chaitanya Mahaprabhu who was living in Vrindavan that time. It is said that when Meera went to meet him, he refused to meet her saying that he does not meet women. At this, Meera sent a message saying, “I thought that there was only one man, Krishna, in Vrindavan, rest all is nature. But it is surprising that after living in Vrindavan and known as the saint who is a great devotee of Krishna, thinks himself to be purush (man) like Krishna instead of prakriti (nature) like gopis.” It is said that hearing this, Goswami realized his mistake and came out immediately from his ashram, apologized to Meera and welcomed her.

After living for sometime in Vrindavan and Mathura, Meera came to Dwarka. While living in Dwarka, Meera wrote many poems in Guajarati which is a precious treasure of Guajarati literature.

Meanwhile, Rajputs had taken back the throne of Chittor from Muslims and after the death of Vikramjeet. Uday Singh became the new king of Chittor. Uday Singh was a worshipper of Bhagwaan Vishnu. The whole of Rajasthan including Uday Singh believed that the reason for the distressful condition of Chittor was insulting and expelling of a greatest devotee like Meera. Thus, Uday Singh sent respected Brahmins of the state to Meerabai in Dwarka to request her to return home.

It is said that the Brahmins who were waiting outside for Meera for quite a while, opened the door and peeped but Meera was not to be found. Only her mantle was lying besides the idol of Ranchhodji. The Lord’s greatest devotee, Meera, had merged into her beloved. Ranchhodji had not permitted her to go away from him.

There are many creations of Meera in the love for Bhagwaan, which are found in four granths. The name of the four granths created by Meera are “Narasi ji ka mayara”, “Geet Govind-teeka”, “Raag- Govind” and “Raag Sorath”.