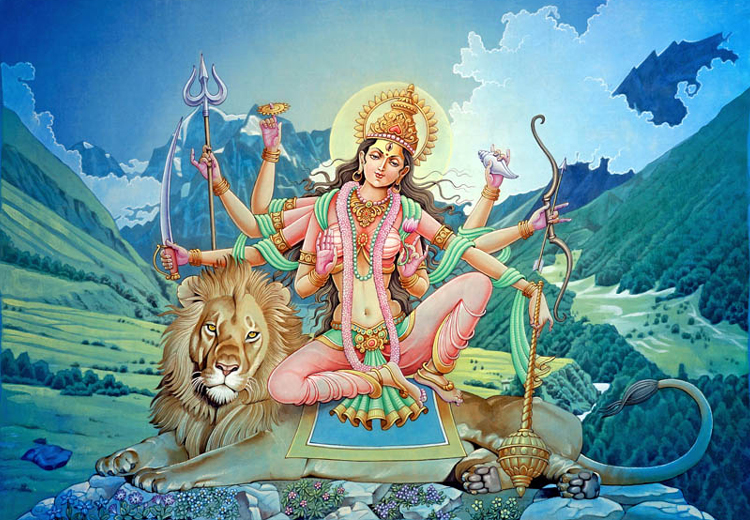 Chandraghanta – one of the Navadurga, nine manifestation of Durga

Chandraghanta is a goddess who wears half-moon shaped bell. She is worshipped on the third day of Navratri – the nine divine nights dedicated to fierce Goddess Durga. Thus, she is an aspect of Goddess Durga. The legend of Chandraghanta is related to Hindu God Shiva and his consort Parvati. After Shiva agreed to marry Parvati, he took his cavalry (baraat) consisting of gods, ghosts, ghouls, sages, etc. to Parvati’s father King Himavan’s palace. When Shiva with his cavalry appeared at the palace, King Himavan and Queen Maina was terrorized by the sight of fearsome Shiva and Queen Maina fainted. Seeing this, Parvati assumed the form of Chandraghanta and persuaded Shiva to transform himself to a charming form. It is believed that the terrifying sound of Goddess’s bell destroy the demons in the battle. She is depicted as eight-handed goddess, holding chakra (disk like weapon), trishul (trident), sword, lotus, Gada (mace), bow and arrow, and shankha (conch). She has a third eye like Shiva, which represents power. Her animal mount is a lion.

When Lord Shiva reached King Himavan’s palace to marry Maa Parvati, her mother, Maina Devi, fainted looking at his unconventional avatar. Lord Shiva had a snake around his neck, his hair was unkempt, and his marriage procession comprised ghosts, sages, goblins, and ghouls. Then, Goddess Parvati took the form of Maa Chandraghanta and prayed to Lord Shiva, who then appeared as a charming Prince. The two got married afterwards. When Mahagauri started wearing a half Chandra on her forehead, she was known as Goddess Chandraghanta.

In this form, Maa Chandraghanta is ready for war with all her weapons. Though the Goddess is known to be ruthless towards demons and enemies, she is extremely compassionate towards her devotees. It is believed that the sound of the moon bell on her forehead expels all the spirits away from her devotees. According to legends, during her battle with demons, the sound produced by her bell sent thousands of wicked demons to the abode of God of Death.

Benefits of having Maa Chandraghanta Painting

Maa Chandraghanta is known for destroying the foes of her devotees. Moreover, her blessings can eliminate all the sins, sufferings and negative vibes from her devotees’ lives. The Goddess is also known to govern the planet Shukra and helps maintain harmony in everyone’s life. Worshipping Devi Chandraghanta cultivates bravery and fearlessness in the worshipers, along with humility and serenity.