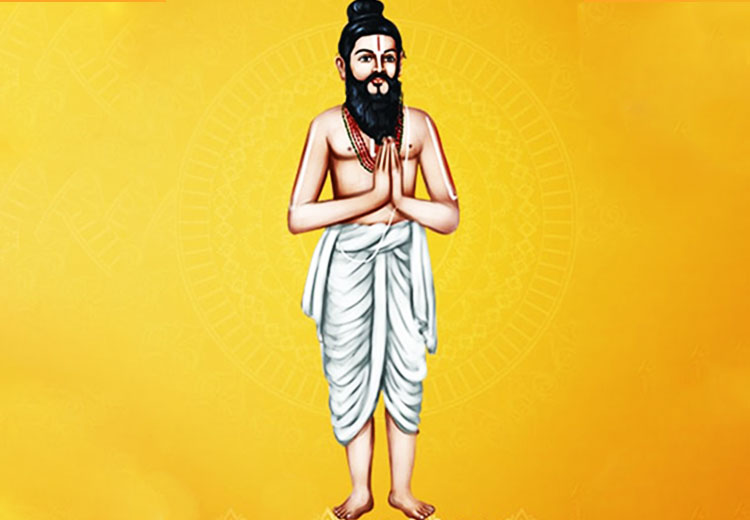 Shri Madhurakavi was born in a Samvedi Brahmin family at Thirukkoloor in Tamilnadu in Chitra Nakshtra on the Shukla Chaturdashi (Friday) of Chaitra month. Traditional learned people believe him to be born in 3224 BC but modern scholars believe it to be 7th century. He is supposed to be the incarnation of Garuda, Lord Vishnu’s vaahan.

Shri Madhurakavi Azhwar was a great scholar of both Sanskrit and Tamil language. He had a great knowledge of Veda and a great devotee of Param Narayan. He was not interested in terrestrial people and many a times he used to live alone, away from people engrossed in meditating. He had a great desire to achieve Bhagvat-Prakash so one day he left everything and went for pilgrimage towards Northern India. He visited Mathura, Kashi and reached Ayodhya. He was very happy to visit Lord Ram’s temple and thought of staying back in Ayodhya for few more days.

While in Ayodhya, one night he saw a divine light in the form of a star in the Southern sky. He saw this light for three consecutive nights. The light was so divine that he could not resist looking at it and so to know about where this light comes from, he started walking towards the Southern direction. Walking in the direction of light, he reached the temple of Shri Bhagvan Aadinath in Thirukurugoor (Shri Nagari), Tamilnadu, where, inside the carving of a tamarind tree Shree Nammazhwar was meditating. As soon as he reached there, the light vanished and within no moment Madhurakavi understood that the divine light that he was seeing in the sky was Shri Nammazhwar’s glow. Madhurakavi waited long for Shree Nammazhwar to take a break in his meditation but when he came to know that he has been meditating since last sixteen years without a break he tried to wake him up. For this, Madhurakavi called out for him clapped his hands but it had no effect on Nammazhwar. Then Madhurakavi picked up a stone and threw it on to the walls of temple. A loud sound came but Nammazhwar did not move from his place. In the end Madhurakavi went near the tamarind tree and asked, “Maharaj, I will ask you one question, “If the small (individual soul) is born in a dead body what will it eat and where will it stay?” Hearing this, Shri Nammazhwar opened his eyes, spoke for the first time after his birth. “It will eat and stay there.” The small one refers to the soul and the dead one refers to the gross matter, the body. When the soul enters the body, the body comes into life and when it leaves, the body becomes a corpse. The soul experiences the pleasure and pains through the body and it senses and reaps what it has sown quite unaware and unconscious of its true nature of its being part of the almighty as his body. So, the soul will eat there and stay there.

Till the time Shri Nammazhwar was alive, Shri Madhurakavi served him with great devotion and wrote down all that his devotional creations. At the time of Shri Nammazhwar’s departure to vaikunth (heaven), Madhur Kavi got an idol of Nammazhwar as his blessing. After Shri Nammazhwar’s departure, Madhurakavi established his idol and worshipped it for the rest of his life forgetting everything else. He was most dedicated to his guru. With a dedication to his guru and devotion, he has created 11 stanzas which is considered as the essence of guru bhakti in the society. nathIt is believed that, Nathmuni who had collected all padas(stanzas) of Azhwars, when he recited these 11 stanzas for 12000 times, Shri Nammazhwar himself came to see him and handed over all the creations of Azhwars to Nathmuni.

(” Here is one who knew none other than Nammalwar; the one who made it his mission in life to sing the Tamizh upanishadam of Nammalwar; The one being overwhelmed by Nammalwar held him as his very God; Let such Madhurakavi fill my heart”)

Shri Madhurakavi holds a much-honored place in the 12 Azhwars of Vaishnav Sampraday.