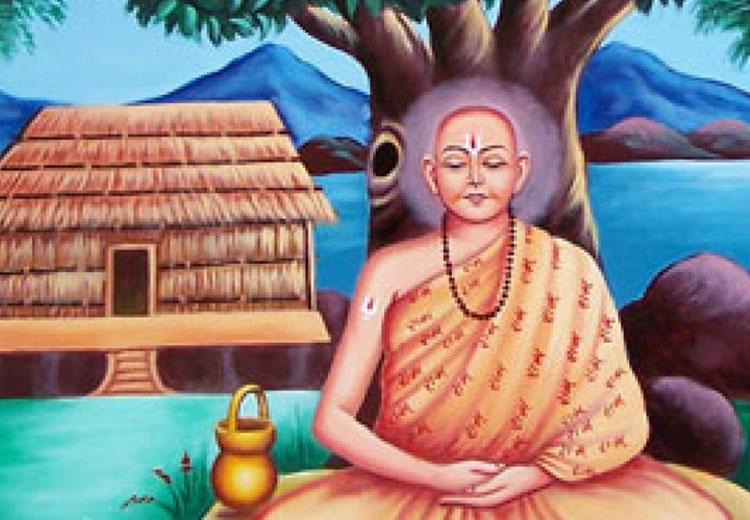 Shri Kuresh lived in Kuru-agrahaaram, two miles west to Kanchipuram in Tamilnadu. He was a rich brahmin born in Vatsa Gotra (lineage). Some people believed him to be born in Harit Gotra. Being the jamindaar of Kuru-Agrahaar village he was named “Kurunaath” or “Kuru”.

His wife’s name was Andaal. He was very rich by birth but he always used his money for the welfare of the poor and needy. His wife always supported him with all her heart for this social work. Both husband and wife were great devotees by nature. Since childhood he had great faith in Shri Ramanuj. After Shri Ramanuj attained asceticism, Shri Kuresh became his disciple and started living with him. Shri Kuresh was Shri Ramanuj’s second disciple. Shri Ramanuj’s first disciple was Dasarathi who was Ramanuj’s nephew.

When Shri Ramanuj came to Shrirangam from Kanchipuram, even Kuresh along with his family shifted to Shrirangam and served Shri Ramanuj. He left all his wealth and like an ascetic, survived with pauperism. He always recited mantras given by his guru and spent his time in discussing Shastras and serving his guru. His wife Andaal was always at his service and happily lived her life and had totally forgotten about her luxurious life. Once, it was raining heavily till afternoon and so Shri Kuresh could not go for alms, so both husband and wife passed their day without food staying hungry but not even once did the thought of hunger came to their minds. But seeing her hungry husband, Andaal prayed Shri Rangnaath. After sometime, a pujari from Shri Rangnath’s temple came with various prasad and gave it to Shri Kuresh and went away. Surprised with this, Shri Kuresh asked his wife if she had prayed Shri Rangnaath and told her not to harass Lord for him. Saying this, he touched the prasad to his head ordered his wife to eat everything and he sat down to read “Shathari-sukt” the whole night.

It is said that 10 months after eating that prasaad (in 983, anuradha nakshatra and Vaishakhi purnima), Andaal gave birth to twin sons. Shri Ramanuj with great love named the elder one Parashar and younger one Vyas.

Shri Kuresh’s learning was unlimited and his memory was very sharp. Whatever he heard or read once would get registered in his mind.

For the creation of “Shri Bhasya” by the blessings of Sharada Mata when Shri Ramanuj was returning from Kashmir Sharada peeth after taking “Bodhayan-Vritti” book, some pandits of Sharada peeth called their men and asked them to take away “Bodhayan- Vritti” from him. After following Shri Ramanuj for a month, the pandit’s men reached him and snatched the book and took it away. Shri Ramanuj was very upset as “Bodhayan-Vritti” was taken away from him but Shri Kuresh consoled him saying, “ Gurudev, please do not get upset, since one month while we were travelling, when you went off to sleep, I used to read “ Bodhayan-Vritti. So, I have memorized the whole of “Bodhayan-Vritti”. I will write it in next 5-6 days.” Hearing this, Shri Ramanuj was very happy. Embracing Kuresh with love, he said, “Son, may you have a long life. Getting me the precious gem that I had lost, you have obliged for rest of my life.”

While writing “Shri Bhasya” Shri Ramanuj told Kuresh, “Son, you be my writer. While writing, if you feel anything is incorrect, you immediately stop writing and sit down quietly. This way I will get a chance to rethink for that topic.” While writing the Bhasya, Shri Kuresh had to stop writing just once.

Shri Kuresh was a great follower of his teacher. Once, the King of Kanchipuram, Chola Naresh Krimikanth sent his soldiers to Shrirangam to bring Shri Ramanuj to Kanchi. Shri Kuresh came to know that the king had sent his soldiers to bring him to Kanchi to force him to leave Vaishnav sect and believe in Shaiv sect and if Shri Ramanuj does not do that, the king would have him killed. Visualising the death threat on his Guru, Shrim Kuresh asked Shri Ramnuj to leave Shrirangam and go away to go to a place where Krimikanth’s power could not harm him. Shri Ramanuj was reluctant to go but had to give up because of continuous requests by Shri Kuresh. He left along with other disciples and Shri Kuresh went with the soldiers to Kanchi in Shri Ramanuj’s clothes where, in the king’s court, for not accepting the Shaiv sect the king ordered the eyes of Shri Ramanuj to be gouged out as punishment. It is said that even while his eyes were being gouged off, Shri Kuresh was praying to lord for the betterment of the people who were acting on the orders of the King.

Shri Ramanuj was living at “Yadavadripati” after he left Shrirangam. When Shri Kuresh went to meet him there, he said, “Son Kuresh, my heart becomes restless thinking you sacrificed your eyes to save my life, because of his bad deeds, Krimikanth fell victim to incurable disease and died, now there is no fear and so it is my wish that you go to Kanchipur and pray to Shri Varadraaj for your eyes, He will definitely award you vision.”

Kuresh was one of the most intelligent persons and a great devotee. He had dedicated all his mind, life, power, body and soul in the feet of his guru Shri Ramanujacharya. When Shri Ramanuj returned to Shrirangam from Yadwadripati, Shri Kuresh was in Shrirangam to welcome him. Till his last breath he served his guru and at the precise time while looking at the face of his guru, he left for heavenly abode.  When he was taking his last breath, his Guru Ramanujacharya was present there. Listening to recitation of Lord’s name, tears of joy rolling down and with guru’s paduka (sandals) rested on his heart, he left for Vaikunthdham.

Shri Kuresh was a greatest guru bhakt and a staunch Vaishnav whose life has been an inimitable example for each and every pupil and devotee.