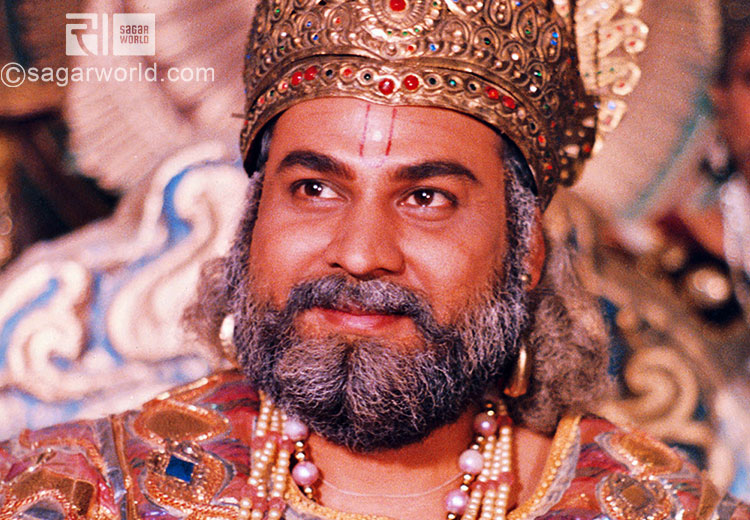 King Devamidh’s son Shur’s wife’s name was Marisha. They had ten sons. Vasudev was the eldest. When Vasudev was born, then kettle-drums had started playing on their own at the palace of the devtas (deities). Thus people started calling Vasudev “Anand dundubhi” (kettle-drum played out of joy).

Kunti Bhoj had no child, so Shrusen gave him his elder daughter Pruttha to him. Pruttha came to be known as Kunti, after living at Kunti Bhoj’s palace.

At the time of Devaki’s marriage, Kans became the charioteer. Just then, there was Akashvani (a divine prophesy from the heavens) that Devaki’s eighth child will kill him.

Kans was a demon by nature. He was very angry, he caught hold of his sister, but Vasudev pacified him and told him to leave his sister and that he will give away all his children to him. So Kans let them go.

As soon as Devaki gave birth to a child, Vasudev would give it to Kans. Then, on Narad’s instigation he put Vasudev and Devaki in prison. Vasudev was very pious and god-fearing, so he did not utter a word and spent his time in devotion.

Devaki’s seventh child was Balram but Yogmaya (the Goddess of maya) transferred this embryo to Rohini’s womb and everyone thought that the seventh child died. Vasudev remained patient. Soon, the eighth child, Shri Krishna was born.

Vasudev, with great intelligence took the child in a basket. Miraculously, all the guards were sleeping, the gates automatically opened and he was able to come out of the prison.

He reached the banks of Yamuna, crossed the river and reached Nandbaba’s house in Gokul.

Yashoda was sleeping with a new born girl child just next to her. Vasudev picked her up and put Krishna in her place. He gave the daughter to Devaki.

Everyone thought that, Devaki has given birth to a daughter. Kans snatched the child from Devaki and banged her on to a stone.

She got transformed into an Ashtabhuja Devi (a Goddess with eight hands) and disappeared in the sky. Then she told Kans, “The child who is going to kill you is already born in Gokul.”

Vasudev bore all these atrocities with a lot of patience. In spite of bearing two sons, the biological parents did not have the pleasure to bring them up.

Their own sons were brought up by Nandbaba and Yashoda who showered all their love on them.

Vasudev is an extremely important figure in Hindu mythology not only because he was the father of Lord Krishna but also because of his virtues of patience and belief in God, which shine as a role model for us.