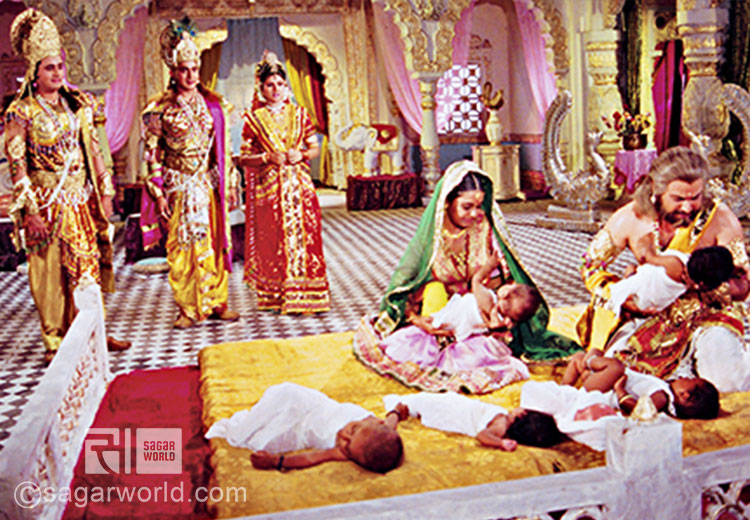 Shri Krishna explained Sage Uttang that the war of Mahabharata was fought for the protection of religion.

Shri Krishna appeared in the Chaturbhuj form in front of Sage Uttang and gave him a boon that whenever he wanted to drink water, even in the dessert he would get it.

Then Krishna asked Indra to give Sage Uttang nectar to drink.

Indra wanted to test Maharshi Uttang to see whether he was worth the nectar or no. So he took the form of an untouchable and went to Maharshi. He did not recognize him and insulted him while Vajranabh was preparing to attack Dwarka.

Balram came out with his mace. A mace war was fought between Charvak and Balram and Balram killed Charvak. Vajranabh was sad on the death of Charvak.

Shri Krishna met his parents, Devaki and Vasudev. They expressed their wish to see their six children who were killed by Kans.

To get back his six brothers, Krishna went to Sutallok (one of the seven under worlds according to the puranas) and met the demon king Bali.

The demon king welcomed Krishna with great respect. Shri Krishna blessed Bali and got back his six brothers and got them to meet Vasudev and Devaki.

Both of them were very pleased to see their sons. Shri Krishna awarded salvation to his brothers and their souls left for heavenly abode.

Here, Prabhavati advised her father Vajranabh to leave the path of irreligion, but Vajranabh did not listen to her.

He took the army along and left to attack Dwarka.

Krishna explained to him that they must start a fresh with peace and cooperation but Vajranabh did not agree and forced him to fight the war.

A fierce battle started between Krishna and Vajranabh.