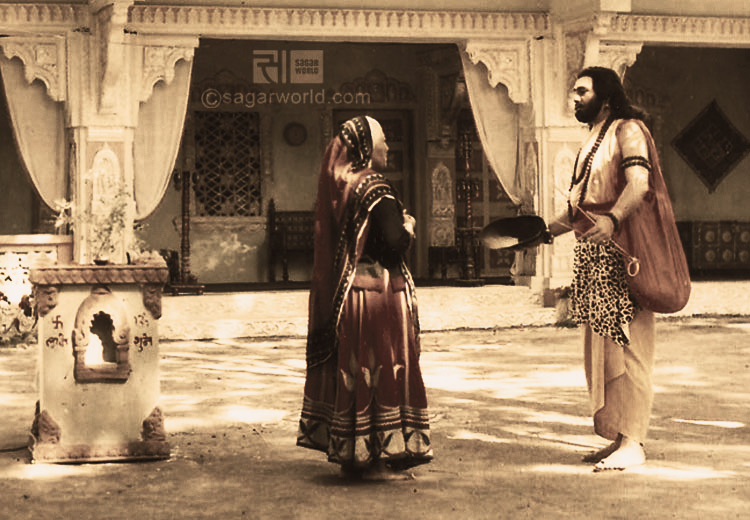 Kans was worried about Krishna and was discussing this while sitting with his friend Banasur. Banasur asked him to be patient and called for the demon Trinavart to kill Krishna. Trinavart appeared in the form of a cyclone. Trinavart reached Gokul and with his illusive power created a whirlwind in which Krishna got trapped. Yashoda came out to save Krishna but she too got trapped in it. Trinavart picked up Krishna and flew away in the sky.  In the sky, Krishna suffocated him and killed him. Yashoda was very happy when she saw Krishna safe and sound. Kans got worried after Trinavart was killed. Banasur told him to stop worrying and wish for good days to come and till then to entertain himself. Kans agreed to go while in the prison; Vasudev and Devaki were engrossed thinking of Balkrishna. After hearing about Balkrishna’s leela (acts) from the divine Sage Naradji, Lord Shiva wished to have a glimpse of Him and so He went to Gokul in disguise of a saint. Even Yogmaya reached Gokul in the form of Purnamasi, her aunty.

Lord Shiva went to Nandji’s house in the saint’s form begging for food. He was very happy to see Krishna sleeping on the bed. Yashoda came out to donate something to the saint (Lord Shiva).

“Shivji told her, “I don’t want anything, just let me take a glimpse of Krishna. That will be my gift.” Yashoda was scared that he should not be an illusive man in disguise of a saint. Just then, Yogmaya in the form of Purnamasi reached there. She explained to Yashoda that he is no illusive giant but a very great saint whom she had seen in Kashi.”

Yashoda was convinced and got Krishna out but did not allow touching him. Shivji looked at Balkrishna, touched his feet and went away. Wherever Shiva put His foot the sand turned into flower. Just then Nandji also came and was surprised to see this. There in Golok, Krishna was sitting with Radha and she was very pleased to see devotion and love between Shiva and Krishna. Gokul was celebrating Vasantotsav (a festival to welcome the onset of spring season). Yashoda was churning butter and feeding it to Krishna with love. Yashoda went inside for some work when Krishna picked up a big ball of butter and started eating. Krishna started eating clay, when Yashoda came back she scolded him lovingly saying that he was eating clay thinking it to be butter.

Krishna said, “I did not eat butter.” Yashoda asked him to open his mouth and when Krishna did so, Yashoda saw the whole universe and Krishna’s Chaturbhuj (quadrilateral) form of Krishna in his mouth and she got absorbed with devotion. Just then, Yogmaya was manifested. She told Yashoda, “God Himself has come to give you the pleasure of maternity.

You have got to know the true knowledge of the supreme self but forget this and treat Balkrishna as your son and enjoy the joy of affection. In your previous life, you had asked for a boon of this happiness of affection”. Saying this, Yogmaya left and Yashoda looks at Krishna lovingly.

Krishna and Balram were playing with the gopis while a few gopis were churning butter in the house. The children started stealing butter. The gopis were watching them silently while hiding and they were laughing at the innocence of the two. Krishna asked Yashoda for butter and when she refused, he broke the pot. Fed up with his mischiefs, Yashoda tied up Krishna with a mortar and went out with the gopis on the banks of river Yamuna.

“Krishna looked at the two Arjun trees while He was tied up. From these trees, two Yakshakumars (demi gods) manifested, bowed to Krishna and disappeared. Krishna trapped the mortar between the two trees and rooted them up. Both the Yakshakumars manifested again and saluting Krishna thanked Him for their deliverance and telling the story of their previous life.”

These Yakshakumars were the sons of Yaksha king Kuber and their names were Nandkuber and Marnagriv. Once while roaming with the heavenly nymphs, they neglected Naradji. Naradji was very angry at this and he cursed them to become trees. When they apologized, he told them that only Shri Krishna will be able to get them emancipation. Today, they attained deliverance because of Krishna, they were fortunate to get to see Krishna. Yakshkumars went to heaven.

Balkrishna had grown up a bit now. In the Kunj- nikunj, the milkmaids were waiting with the bowl of butter. Krishna came and stole the butter and started eating. The gopis caught him and in order to punish him they asked him to dance with them. Krishna danced with them which made the Gopis very happy. Seeing this, even Radha was very pleased in Golok. When asked,

“Krishna said, “These milkmaids were souls of ascetics, devotees and sweet persons, they had asked me for a boon of affection, today by dancing with them I fulfilled their boon.” Dancing continued and the ascetic souls were very happy.In their physical form, the milkmaids were happily dancing with Krishna and thereby enjoying the pleasure of their boon being fulfilled.”