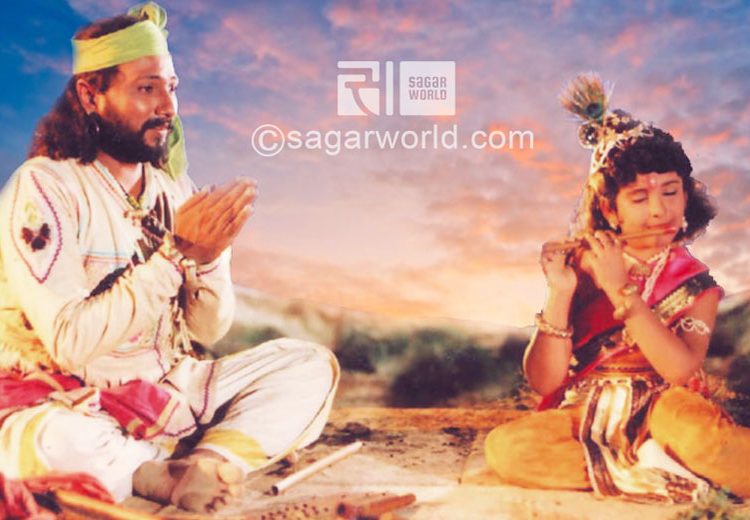 Kanha (Krishna) was planning along with His friends to harass gopis by the bank of river Yamuna. They were planning to break their pots and steal butter. Just then few gopis came with pots of milk and curd on their heads.

Krishna and his friends hid on top of a tree and as soon as the gopis came nearby they broke their pots with pellet bow.

Gopis ran after them to catch hold of them but all of Kanha’s friends ran away and Kanha was caught. Gopis took him to Yashoda.

On being asked by Yashoda, Krishna said that he had not broken the pots. Yashoda wanted to lock him in the room to punish him but instead Yashoda and Kanha’s game of pleasing and displeasing was going on.

Next day, in the morning a flutist was playing the flute sitting under a tree.  On hearing the tune of the flute, Krishna praised him and asked him to teach him to play the flute. The flutist took out a small cute flute and gave it to him.

When Kanha played the flute there was a sweet sound of the flute humming in all the directions. The deities up above were also infatuated with Krishna’s tune.

The flutist was also shocked with this miracle. He bowed to Krishna and just thenNandrai came there. Even Nandji was surprised when they heard this from the flutist. He came home with Kanha and told Yashoda everything; she too was fascinated with her son’s miracle.

Then, Radha’s father Vrishbhanu along with Radha came to Nandji’s house and asked them to come for the holi festival to theirtown Barsana.

Radha and Krishna were together on this earth. The deities were very happy to see them together.

A fruit seller, an old woman carrying a basket of fruits on her head was moving around in the streets of Gokul calling for people to buy them but nobody was buying any fruits from her which made the old lady very unhappy.

Kanha went in the house, got grains and filled up the old lady’s basket with it, which made her very happy.

After reaching home, she saw that the basket was full of gems and stones instead of grains, she was aghast. Even Naradji up above was very happy on seeing this act of Krishna.

Gopis were sitting on the banks of the river Yamuna and repenting that they have not done good by complaining Yashoda about Krishna. Here Krishna and His friends were discussing how to teach the gopis to love and how to burst their ego.

As soon as the gopis heard the tune of the flute, they wanted to meet Krishna and wanted to come out of the river; but were very upset when they saw that their clothes were missing. Just then they saw Krishna sitting on the tree.

The Gopis wanted to come out when Krishna called out to them. They told him that their clothes were missing; they didn’t know how to come out? When they asked Him to return their clothes, Krishna told them that it was a sin to take bath naked in the river; it was a sin and insult of the river goddess.

The Gopis were ashamed and they promised Him that hence forward they would never take a bath without clothes, so then Krishna returned their clothes.

Krishna had grown up a bit more. He went with his friends to Madhuvan (forest in Vraj) to graze the cattles. Kans sent Putna’s brother Bakasur, the illusive demon to kill Krishna. Bakasur transformed himself into a duck and spreading his long beak, tried to catch Krishna and swallowed him. On reaching his stomach,

Krishna produced flames of fire. Perplexed, Bakasur threw Krishna out of his body. As soon as He was out of his body, Krishna caught hold of his beak and tore it off. That caused Bakasur to die. After he died, Kans sent Adhasur, elder brother of Putna and Bakasur to kill Krishna.

Adhasur came to Madhuvan in the form of a python. He opened his big mouth and swallowed all the cowherds that made Krishna tears his jaw and kill him as well. Adhasur’s soul manifested and bowed forth Krishna. Adhasur told his story. In his previous life, he was the son of demon king Shankhasur.

He was very proud of his body, due to this he insulted Sage Ashtavak and laughed at his crooked body. The sage cursed him to be a crooked snake. When he apologised the sage said that in the dwapar age, after Shri Krishna touched him, he would get deliverance. He said, “Today you have given me salvation, I am fortunate.” Adhasur got salvation.

While Krishna was playing with a ball along with his friends it went into the Yamuna River. Krishna jumped into the river to take out the ball where he meets the king of snakes, Kaliya.

Krishna asked Kaliya to get out of the river and told him, “You have poisoned the water of Vrindavan and Yamuna, I will punish you. You stop spitting the poison and surrender.”

There was a fight between Kaliya and Krishna. Krishna attacked his hood that frightened Nagraj.

Nagraj apologised to Krishna.Krishna was ready to forgive him on a condition that he would leave Yamuna and go away to Ramanak Island in the centre of the sea.

Kaliya told Krishna that the vultures there would kill him as due to the curse of Sage Saurabh the vultures didn’t come to river Yamuna, so he was safe there.

Krishna gave him the assurance of safety that the vultures would not harm him there, so Kaliya left river Yamuna.

Govardhan Parvat, and the Tuladaan - Chapter 7