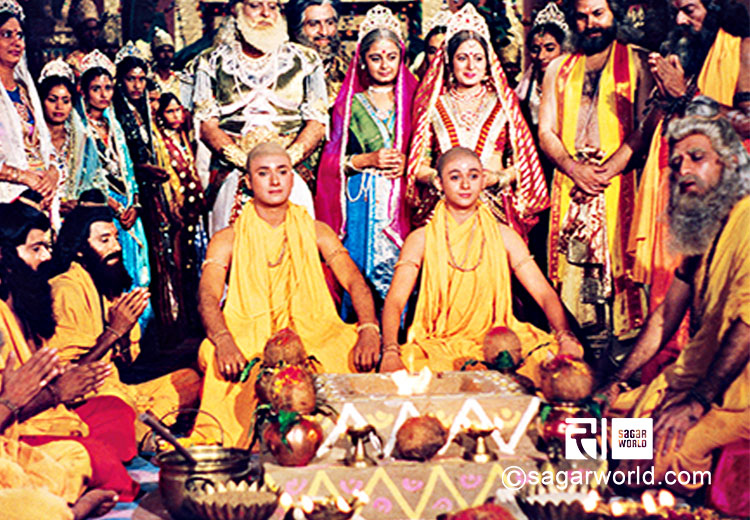 Yagnopavit Sanskar of Krishna and Balram

Ugrasen was being coroneted in Mathura. Nandrai was leaving for Gokul and asked his leave to Krishna and Balram. Krishna and Balram were worried about what would happen if Nandbaba ordered them to go to Gokul! The purpose of Him being incarnated on this earth would not be served then. On Krishna’s order, Mahamaya erased the feeling of affection from Nandbaba’s mind and filled it with knowledge.

Nandbaba was very sad as he had to leave but Krishna explained that he should free himself from emotions and bless him to go on his dutiful path. Nandbaba blessed them and took their leave with a distressed mind.

Vasudev took along Krishna and Balram to the family priest Sage Garg’s ashram and requested them to get their Yagnopavit (the initiation ceremony of sacred thread amongst Hindus). According to the family priests suggestions the king’s priest Sattyak made arrangement for the ceremony. The ceremony got over. The family priest advised them that after Brahmaji and Agnidev, now they were his brahmachari (a religious student who observes celibacy).

The Guru (a preceptor who initiates) got the initiation done and ordered them to go to Sage Sandipani’s ashram to get education.Both the brothers went to Sandipani’s ashram, became their disciple and took education. There, Krishna met Sudama and Krishna promised him to maintain their friendship for lifetime. Sandipani told Krishna and Sudama the story of Lord Vishnu’s ten incarnations.

The first story was of Varah avatar (incarnation). Hiranyaksha, the demon and enemy of the deities thought that with the religious austerity and yagya (sacrifices) of the sages and saints living on the earth, the deities got strength. So, if the earth was drowned in the sea, the deities would become weak automatically. Thinking this, he stole the earth and hid it under the sea. The deities prayed to God to get the earth released.

Lord Vishnu took form of Varah (a Boar) and manifested from the nose of Lord Brahma and carried the earth on his horns and held it high over the sea. Demon Hiranyaksha attacked him, a great battle was fought and in the end Lord Vishnu killed Hiranyaksha. Earth got deliverance and the deities praised the lord. After this Sandipani recited the story of Narsinha avatar (incarnation).

After the death of Hiranyakshyap, his brother Hiranyakashyap was very furious and so created a terror to finish the existence of the Saints and Sages. Terrified by him, the deities requested Lord Vishnu to protect the saints from the terror of Hiranyakashyap. Lord Vishnu consoled them that he would kill Hiranyakashyap and relieve all of them from his terror.

Here, on the advice of Shukracharya, the teacher of the demons, Hiranyakashyap worshipped Brahmaji and got a boon from him that he would neither die in day nor in night, as also not with any weapon. No animal, human being, deity and demon could be able to kill him. He would not die in the sky or on earth.

Brahmaji blessed him with a desired boon. On getting this boon, Hiranyakashyap was full of ego and so he stopped praying to the Lord and the deities of earth and made an announcement that he was the lord and henceforward people should worship him.

Every one on earth stopped praying as they were afraid from him. But Hiranyakashyap’s son Prahlad prayed and worshipped the Lord. At this, Hiranyakashyap got angry and tried to kill him. He threw Prahlad from a mountain but he was saved.

Hiranyakashyap made him sit on the lap of his sister Holika and wanted to burn him in the fire. Holika had a boon that she could not be burnt by fire. But when she took Prahlad in her lap and was set on fire, she was burnt but Prahlad was saved as at that time he was praying.

In the end, when Hiranyakashyap wanted to kill Prahlad, Lord Vishnu manifested in form of Narsinha and at twilight, keeping Hiranyakashyap on his knees tore his stomach with his sharp nails. Hiranyakashyap died.  The deities praised the Narsinha form of Lord.