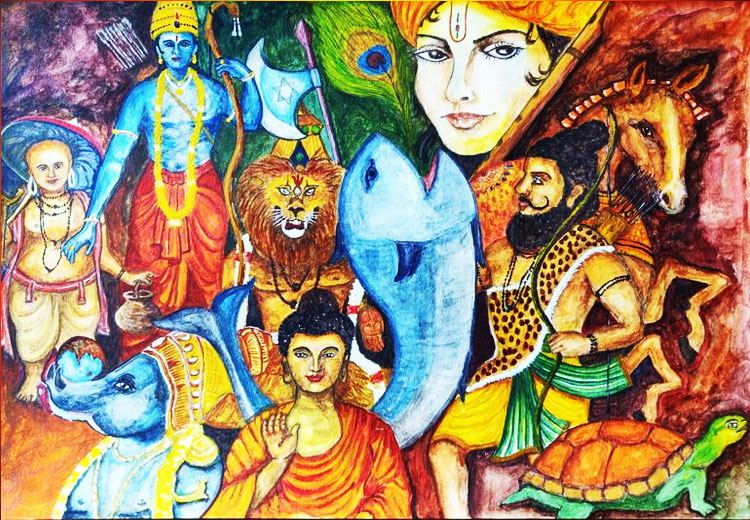 Sandipani muni told the story of Matsya avatar (incarnation of Lord Vishnu as a fish). He said that after the final destruction of the universe, a new universe was to be created. In the starting of the story, pious king Satyavrat was praying and offering water to the lord, just then a small fish came in his hand.

The king asked her, “Who are you? And what is this illusion? You are definitely God and I surrender to you. My ego has burst. My palace and this sea seem to be smaller for you.” The fish was actually God himself.

The lord manifested in the Chaturbhuj form and as his ego was torn apart; he was pleased with him and told him, “Whenever there will be the final destruction of this universe, you take along the Saptarishi (a group of seven principal sages) in your boat and protect them.”

At the time of destruction, the king protected the lives of the Saptarishi along with many others and with these only God created universe.

During this process of creation, God protected the boat of the king Satyavrat being a fish and because of this; his incarnation came to be known as Matsyaavatar.

On Lord Vishnu’s advice, to remove the nectar and other divine things from the ocean, the deities asked for help from the demons because the deities could not carry out a heavy job like the churning the ocean all alone.

Even the demons could not do it alone. That is why both of them needed cooperation and do the work jointly.

From the churning of the ocean, Lakshmiji, Moon and other divine things were taken out. Lord Dhanvantri came out with a pot of nectar.

A battle was fought between the deities and the demons to get the nectar. The demon king Bali was killed by Indra in this fight.

Shukracharya, the priest of the demons with the help of Sanjivani Vidya (the act of restoring a dead man to life) made him alive. The nectar was with the deities now.

King Bali decided to do hundred yagyas in order to take revenge of his defeat from Lord Indra. He completed ninety nine yagyas, if he completed hundred yagyas then he’d get the position of Indra and the deities would be in trouble.

To save the deities from this crisis, Lord Vishnu manifested into a Vaman  and asked Bali for land equal to three feet. Bali gave it according to his promise. In the form of vaman,

Lord measured the whole universe with two legs and kept the third leg on the head of Bali and pushed him into the Patal lok (the world under).

Lord was pleased with the faith with which Bali did the yagyas and gave him a boon that in Savarna Manvantar, he would get the position of Indra and his desire would be fulfilled. After telling the story of Kurma incarnation and Waman incarnation, Sage

Sandipani told the story of Ram avatar.In the Tretayug, Ayodhya king Dashrath organised a putrakameshthi yagya (a sacrifice done with a desire to have a son). Sage Saptashringa accomplished the yagya.

Other side, Sage Vishwamitra comes to Dashrath for help as the demons interrupted his yagya.

Ram and Lakshman went to the jungle for his help and killed the demons Subhahu and Tadka who had interrupted the yagya. After this Ram and Lakshman came to Janakpuri along with Vishwamitra.

King Janak had organized a Swayamvar (a choice of husband made by a princess in public) for his daughter Sita.

The condition of the swayamvar was that the one who broke the Shivdhanush (a bow) kept near King Janak, could marry Sita. Ram broke the dhanush and wed Sita.

Lord Parshuram got very angry on his worshipful Lord Shiva’s bow being broken and he came to the yagya of Janak but as soon as he saw Ram, he understood that he was the incarnation of Lord Vishnu.

Parshuram’s time for incarnation was over. Ram avatar (incarnation as Rama) had taken place. Parshuram took his leave while praising Him.