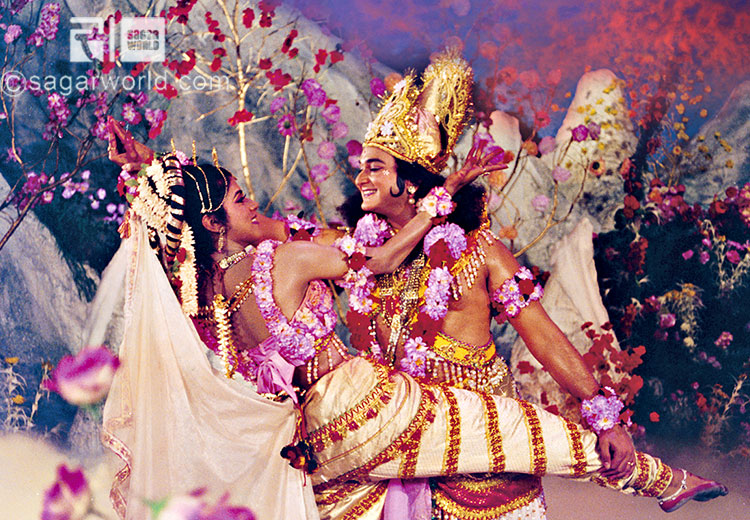 Kamdev and Rati are dancing

After getting a boon from Brahmaji, Tarkasur, the demon started thinking him to be immortal and was very proud. He attacked the earth and netherworld and became invincible.

After this, he attacked the heaven in order to capture it. He defeated Lord Indra and gained control over heaven.

The deities asked Lord Vishnu for help but Lord Vishnu told them that Tarkasur had got a boon from Brahmaji and he could be killed only by Shiva’s son.

Shiva was engrossed in penance. The deities requested Kamdev to interrupt Shiva because it was only him who could do that. Kamdev agreed to it.  He broke Shiva’s penance.

Shiva was very angry and burnt him to ashes. On the request of Kamdev’s wife Rati, Naradji told her that Kamdev was now without a physical body and he would be born as Pradyumna, son of Krishna.

In Dwarka, Rukmani was pregnant. Her Godbharai (filling the lap of a woman with coconut / baby shower) ceremony was being done.Shambarasur and his son Mayasur attacked Dwarka. A fierce battle was fought with Krishna and Balram. Shri Krishna killed Mayasur.

Sambarasur was very angry and sad on the death of his son. His wife was also very angry. Both, husband and wife decided to take revenge from Krishna.

On Naradji’s advice, with Krishna’s permission, Kamdev entered Rukmani’s embryo. After the godbharai ceremony, few days later, Rukmani gave birth to a son. He was named Pradyumna. Lots of celebrations were carried out in Dwarka on the birth of Pradyumna and there was happiness everywhere.

Devarshi Narad went to Sambarasur’s palace and gave him the news, that in Dwarka a son named Pradyumna was born in Krishna’s house and celebrations were going on.

Sambarasur who was sad on the death of his son, Mayasur got very angry, even his wife got angry at this news. The news of celebration at Krishna’s house made Sambarasur very furious and he made a very firm mind to take revenge from Krishna.

Shambharasur is killed by Pradyumna – Chapter 29

Shambharasur is killed by Pradyumna - Chapter 29