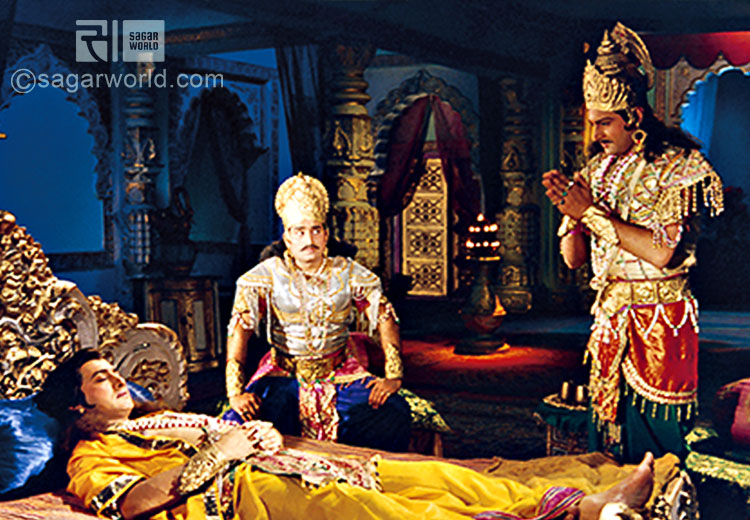 Shri Krishna went to Kauravas court being the peace messenger and explained to Dhritrashtra and others to side the truth and let the Pandavas enjoy their rights. Duryodhan was adamant about fighting a war.

Then he ordered Dushashan to make Krishna his captive. Krishna appeared in his Viraat (gigantic) form and frightened everyone and met Kunti and Vidur before returning.

Kunti advised her sons to fight for their rights and prepare for war.

Kauravas and Pandavas prepared for war. Duryodhan and Arjun both went to Krishna to ask for his support. Duryodhan got the chaturangini (an army consisting of horses, elephants, chariots and infantry) army of Yadava’s family and Shri Krishna agreed to be the charioteer of Arjun.

From Kauravas side, Bhishma Pitamah was appointed the chief army officer. Karna opposed this decision and refused to fight the battle under his leadership.

ry sad to know that he was not a carpenter’s son but a deity’s son. He went around in all directions in search of his father.

Then Lord Surya (sun) manifested and told him that he was Karna’s father, but he did not tell him his mother’s name. Karna returned disappointed.

Before the war, Bhishma Pitamah went to meet his mother Ganga. Ganga advised him to go into Krishna’s shelter. By Bhishma’s prayers, Shri Krishna manifested and asked him to follow the path of religion and duty.

Preparations for the war were over. Bhishma still wanted to avoid the war and then Krishna told him that only Ved Vyas could try stopping the war now.

Ved Vyas came to Hastinapur and talked to Dhritrashtra. Dhritrashtra did not listen to him. Ved Vyas awarded supernatural powers to Sanjay and went away.

On the grounds of Kurukshetra, Kauravas and Pandavas army were ready for the war. On Krishna’s advice, Arjun prayed to Devi Durga. Durga blessed him to for success.

Arjun was very upset on seeing his brothers’, Bhishma Pitamah and Guru Dronacharya in the Kauravas army and he had the heart of shedding blood of his own people.

Then Krishna edified Arjun with Geeta Gyan and challenged his gallantry. Even the deities were very anxious to hear the teachings of Geeta.

Bhagwat Geeta on the battlefield - Chapter 38