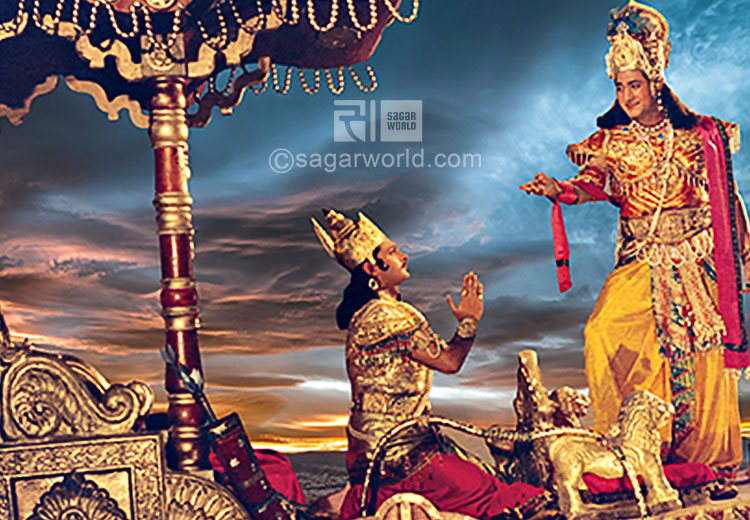 Shri Krishna while teaching Geeta said that there was a difference between body and soul. Even after the physical body was destroyed, the soul remains alive as it is immortal. No weapon could destroy it nor could water melt it and air couldn’t dry it. While defining the wheel of life,

Shri Krishna said that in one life, the body kept changing. Lord Shiva showed Parvati the different forms of Krishna’s body right from childhood to adult hood and the definition of the wheel of life was cleared.

While preaching to Arjun, who was fascinated by the worldly relations, Krishna mentioned that Arjun should free his mind from emotions. He said that to free ones mind from emotion, one must have control over the sense organs. That did not mean that he should not enjoy the worldly pleasures and become a saint.

A person should not always be engrossed in merriment and pleasure.While defining the relations, Shri Krishna also gave the knowledge of Gyanyog (emancipation attained through true knowledge) and Sankhyayog (rationalism).

Shri Krishna defined religion and acts (deeds) saying that a human should perform his acts like a Karmayogi (a person performing religious acts to purify mind) that is not to expect for a reward or result.

One gets rewarded according to one’s acts. While defining destiny, Krishna said that fate (destiny) did not write good or bad actions. A person should understand this and set himself free from the expectations of the result and then only he could achieve closeness to God. This was the situation of a person being well-satisfied.

Shri Krishna also explained how a satisfied person kept cool in both happiness and pain and kept himself engrossed in worshipping God and then only he would be free from emotions like happiness, pain, honour, dishonor, profit and loss. With this preaching Krishna inspired Arjun to carry on his duties without any expectations.