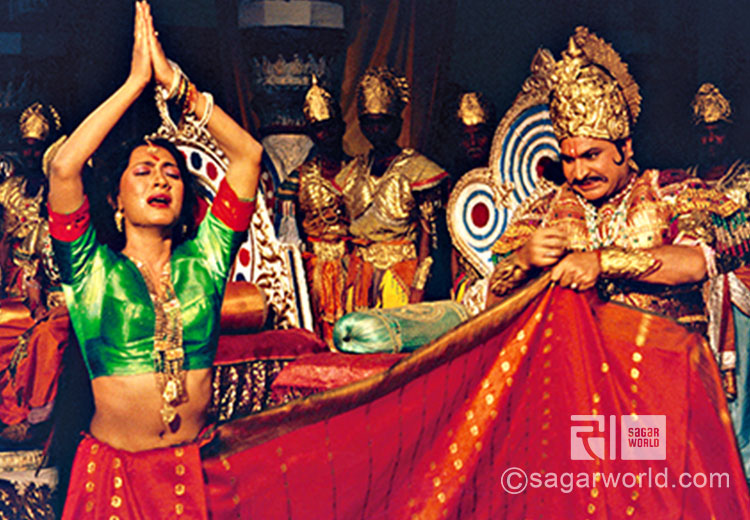 Duryodhan was very jealous of the grandeur of the Pandavas capital Indraprastha. Shakuni uncle gave him an idea that the Pandavas would come to Hastinapur for the Holi festival.

On this occasion he must invite Yudhishthir for gambling. Yudhishthir loved to gamble and so he would be ready to play.

Later Shakuni would defeat him by cheating him and then support Duryodhan in snatching away the kingdom of the Pandavas. On getting the invitation from Duryodhan, Yudhishthir played the game.

The condition of the game was that whoever lost the game would go in exile for twelve years and one year living incognito. If during the period of living incognito, anyone was recognised then they would have to go for twelve more years of exile. Shakuni defeated Yudhishthir by cheating on him.

Yudhishthir lost his kingdom. He put his brothers in the game but then too he lost. Then he put Draupadi in the game and lost her also. Pandavas condition was like the servants of Kauravas.

Then by Duryodhan’s orders, Dushashan dragged Draupadi in the court and tried to disrobe her. Bhisma Pitamah, Dronacharya and Kripacharya were present in the court but no one opposed to Duryodhan.

Draupadi cried for help in order to save her chastity but everyone kept quiet.In the end, Draupadi remembered Shri Krishna and Krishna increased the length of her cloth and saved her chastity.

With this miracle of Krishna, the Kauravas were very scared. Dhritrashtra understood the seriousness of the situation and returned the kingdom to Pandavas and freed them from being servants.

But on Duryodhan’s insistence, one more game was played and Yudhishthir lost one more time. According to the terms of the game, Pandavas went for exile.

During the period of exile, to learn the art of using celestial weapons, Arjun went to Lord Indra’s devlok. There, the celestial nymph Urvashi was fascinated by Arjun but Arjun respectfully rejected her proposal.

At this, Urvashi got very angry and cursed him that he would remain impotent and dress up like a girl for one year.

On completing the twelve years of exile, the Pandavas lived in disguise at king Viraat’s palace for a year.

In between the Kauravas attacked Viraatnagari, the city of King Viraat to snatch away his cows. Arjun became the charioteer of Viraat’s son Drupad and defeated Kauravas in the war.

On the completion of the period of living incognito, Pandavas mystery was revealed. King Viraat decided to get his daughter Uttara married to Abhimanyu. The Kauravas were also invited to the wedding.

Dispute of the Pandavas and Kauravas for the rights of the states was still not over. The result of the dispute was a war, but Pandavas wanted to give an end to it amicably. Then Krishna decided to go to Kauravas court being the messenger of peace on behalf of Pandavas.