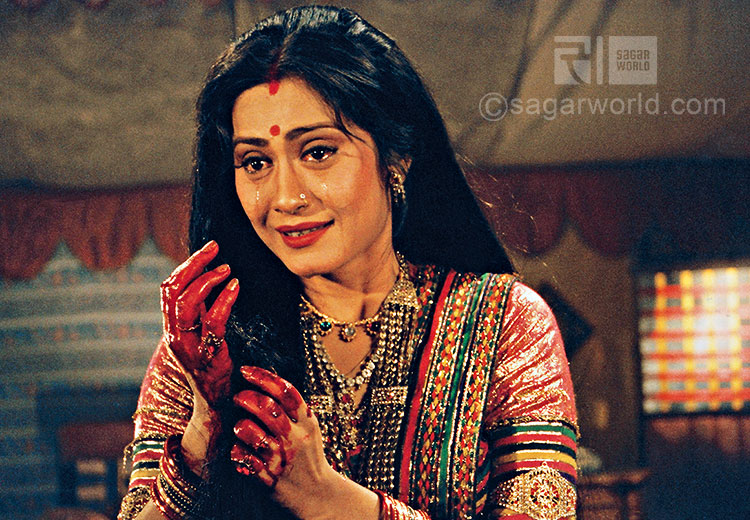 After getting the news of the death of Kauravas’ army chief Shalya, Dushasan came to fight.

A battle was fought between Bhima and Dushasan.

Dhritrashtra and Gandhari were worried that Bhima would accomplish his oath.

During the fight, Bhima pulled out Dushasan’s both hands and in the end killed him.

After this, he washed Draupadi’s hair with his blood. Duryodhan was very sad at Dushasan’s death.

Dhritrashtra and Gandhari were mourning. Duryodhan was feeling very lonely after his brother’s death.

Ashwathama, Kripacharya and Kritvarma consoled him.

According to their war strategy, Duryodhan ran and jumped into a lake and hid inside the lake.

Pandavas’ spies reached the lake while searching for Duryodhan and informed Pandavas about the hiding place of Duryodhan.  Dhritrashtra and Gandhari were praying for Duryodhan’s safety.

Here, Naradmuni gave the news of war on the battlefield of Kurukshetra. Balram decided to go to Kurukshetra. The mace fight started between Duryodhan and Bhima. In between Balram came and tried to stop the war but Shri Krishna somehow pacified him.

Bhimsen went against the rules of mace fight and hit Duryodhan’s thigh and broke it.  At this, Balram got very angry and came forward to punish Bhima but Krishna some how managed to pacify him. Balram was very unhappy and he left Kurukshetra and went back.

On seeing Duryodhan’s condition, Ashwathama, Kripacharya and Kritvarma vowed to take revenge. As soon as injured Duryodhan fell down on the ground, Pandavas blew the conch shell and on hearing this, Draupadi was very happy.

Injured Duryodhan appointed Ashwathama as army chief and told him his desire to kill Pandavas. Ashwathama takes an oath to kill the Pandavas. On the completion of war, Shri Krishna along with Pandavas goes to Bhisma Pitamah to take his blessings.

Shri Krishna mourned for those who died in the war. After this, Krishna and Pandavas went to Oghvati River for bath. Here, in the darkness of night, Ashwathama attacked Pandavas camp and killed Shikhandi.

Barbarik, the observer of the Mahabharata war - Chapter 48