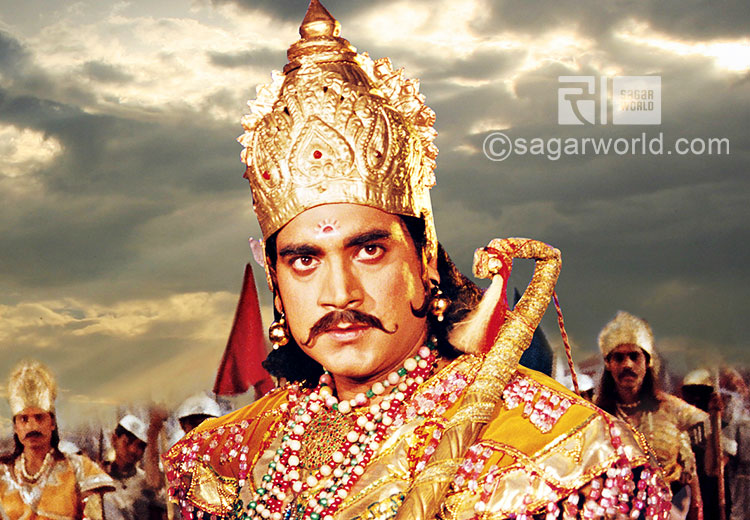 On getting the news of Karna being appointed as the chief of Kauravas army, Kunti was perplexed. She went to meet Karna to get him on to Pandava’s side but Karna refused to do so.

Karna was very upset when he knew the mystery of his birth from Shri Krishna but he was not ready to leave his friend Duryodhan. Karna consoled Kunti that she would always remain mother of five sons.

The war started again. Shri Krishna called Bhimsen’s son Ghatotkach and ordered him to face Karna. Ghatotkach with his illusive power created uproar in the Kauravas army. Duryodhan called for illusive power experts like Alambul and Allayudh to face him. But both of them were also killed.

Then Duryodhan and Shakuni compelled Karna to kill Ghatotkach. Karna used the unfailing weapon on to Ghatotkach and killed him.

Pandavas were very sad at the death of Ghatotkach, but Shri Krishna pacified and explained to them that Ghatotkach’s sacrifice had become a lifeline for Arjun because Karna could not use the unfailing weapon once more and so the danger of Arjun’s life was over. Next day in the war, Nakul and Sahadev also were defeated by Karna.

A fierce battle was fought between Bhima and Karna. In the end, Karna defeated Bhima and he fell down unconscious. At this, angry Arjun confronted Karna and strongly fought with him.

Both of them used celestial weapons. At last, Karna attacked Arjun with Vaishnavastra but Shri Krishna took it on his body and it turned into a garland of flowers and hung on to Krishna’s neck.Arjun considered this as his defeat and was upset.

Ashwathama the elephant is dead! – Chapter 44