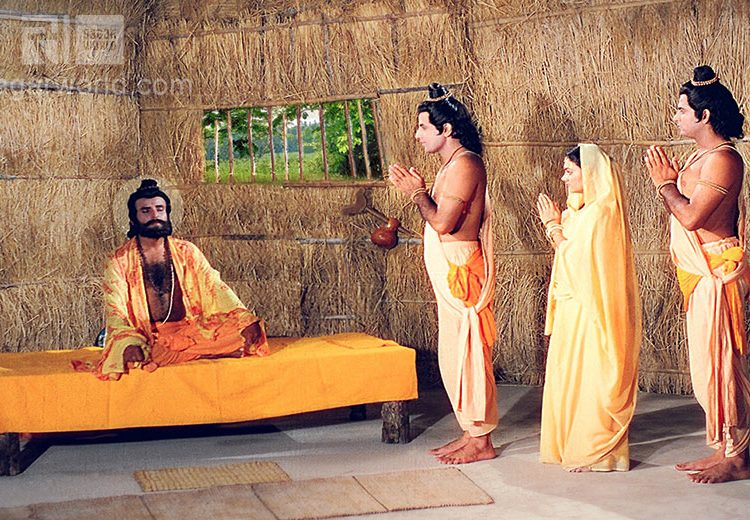 Sage Sootikshna is meditating while Ram,Lakshman and Sita standing before him

Sootikshna was a disciple of Sage Agastya, a very simple hearted soul. One day he asked his Guru Agastya, to demand his guru dakshina (the price a student traditionally pays to his teacher for teaching him). Agastya said, “When Ram, Lakshman and Sita come to the Dandaka forest, you must conduct them to my ashram. That will be your guru dakshina.” That is why Sootikshna was sure that Ram would come that way someday.Therefore by the power of his mental yogic energy, he awaited Ram’s arrival.

Sharbhang Muni asked Ram to visit the ashram of Sootikshna. When Ram arrived there, Sootikshna was seated in a meditation pose under a tree. Therefore Ram first entered his heart in his divine Chaturbhuja (four-armed form) to give him darshan. This realization made him open his eyes, and he was thrilled to see Ram, Sita and Lakshmanstanding before him. Moved by his devotion, Ram decided to spend some time in his ashram.

There they met several sages and rishi’s who lived in the Dandaka forest. They also saw the piles of skeletons of the sages who had been killed by man-eating, nocturnal Rakshasa’s (demons). Ram, seeing this awful sight, then undertook an oath that he would rid the earth of all wicked rakshasa’s. The sages were delighted and relieved at this, and welcomed his proclamation with joy.

Shri Ram then asked Sootikshna to suggest a location where they could build an ashram and spend their time peacefully in the forest. It was then that Sootikshna said, “The ashram of my Guru Agastya is nearby. Meeting him will be very beneficial to you. He will also be able to suggest the ideal place for you to stay. I will conduct you to Sage Agastya’s ashram. This Dandaka forest is very dense and difficult to cross. I will show you the way and lead you to Guru Agastya.

This will also pay the debt of gratitude I owe to my guru.” Shri Ram gladly accepted his affectionate offer of help. Sootikshna and several of the Dandaka rishi’s then began the journey through the picturesque Dandaka forest towards the ashram of Agastya.