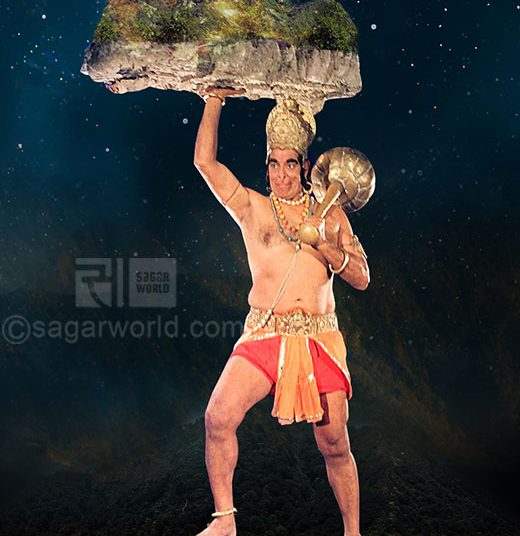 Hanuman brings the Sanjeevani to rescues the life of Lakshman

on his way, while flying towards the Himalayas, Hanuman became very thirsty, so he stopped upon seeing a pond of clear water at the ashram of a sage. Hanuman politely requested the sage’s permission to drink some water. The sage was actually Kalnemi in disguise, and so pretended to be wise and spiritual, and talked to Hanuman about lofty ideas of Brahma Gyan, the ultimate knowledge. Then he told Hanuman “Go and drink water from the pond; after that I will give you a discourse.”

Hanuman went to the pond, where a mayavi (illusionary) crocodile caught hold of his leg and began to drag him into the pond. Hanuman settled him with one solid blow. The crocodile was in reality a gandharva lady cursed to wear a crocodile form, and now it being dead, was thereby released from the curse. He disappeared back to his world in the sky, but before doing so, warned Hanuman that the sage was actually a wicked magician who had been sent by Ravan to delay or destroy him.

Hanuman went to the wicked sage and killed him also, with a single blow, and then continued on his journey. In the Himalayas, on Drona peak in the dark of the night, all herbs looked alike to him, shining like stars. Hanuman could not recognize which was the Sanjeevani booti, so he picked up the entire mountain, and headed with it back to Lanka.

When Hanuman flew over Ayodhya, Bharat at Nandigram mistook him for a Rakshasa (demon) and aimed a featherless arrow at him, hitting him in the thigh. Hanuman cried out “Shri Ram” and fell down to the earth. Bharat had heard him utter the name of Ram, so he rushed over to him.

He heard the whole story of the warfare on Lanka, and became distressed. To speed Hanuman back, he made him sit on a fast arrow, and shot him back to Lanka with his precious burden in a fraction of the time. Sushena then was able to locate and identify the Sanjeevani herb on the mountain, and used it to treat Lakshman, who revived at once. The vanara sena rejoiced mightily to see him cured.

Now when Indrajit heard the news of Lakshmana’s revival, he decided he would pray to his Ishtdevi (favorite goddess) in Her cave, planning to request a boon to become invisible. He made preparations to hold a secret ceremony to acquire this power by praying to the devi (goddess).

Vibheeshan, discovering this plan, warned Ram that if Indrajit succeeded in completing this yagna, he would become invincible. So Ram sent Angad and some of the other monkeys to disturb and disrupt this ceremony.

Lakshman went to the cave where Indrajit was and challenged him loudly. When Indrajit came out of the Devi’s cave to answer the challenge, the monkeys bit and scratched him and threw impure substances in the sacrificial fire, so that he could not complete the yagna and had to quit.

In the end, Indrajit took permission of his father Ravan, consoled his wife Sulochana, and then confronted Lakshman directly, one on one, in the battlefield with a deafening roar. Lakshmana replied in kind. There was a mighty battle between the two valiant warriors. Indrajit used many of his magical weapons, but Lakshmana was more than a match for him, and countered every move he made. At last, Indrajit was killed by a well-aimed arrow of Lakshman’s.

When Ravan heard the news of the death of his beloved and brave son Indrajit, he was drowned in sorrow. The entirety of Lanka fell under a cloud of mourning. Mandodari and the other queens blamed Ravan, but still he was still not prepared to listen to any sensible words, blinded with ego as he was. He armed himself to go into battle.Meanwhile Rishi Agastya came to Ram and taught him the Aditya Stotra.

Ravan, energizing his remaining forces by a rousing speech, galvanized them into entering the battlefield with renewed enthusiasm. There was a terrible battle between Ram and Ravan. Injured by Ram’s sharp and well-armed arrows, Ravan fainted in his chariot. His charioteer quickly bore him away from the battlefield. But as soon as he regained consciousness, Ravan once again returned to the battlefield to attack Ram.

Meghnad ties up Rama and Lakshmana in Nagpash – Chapter 14