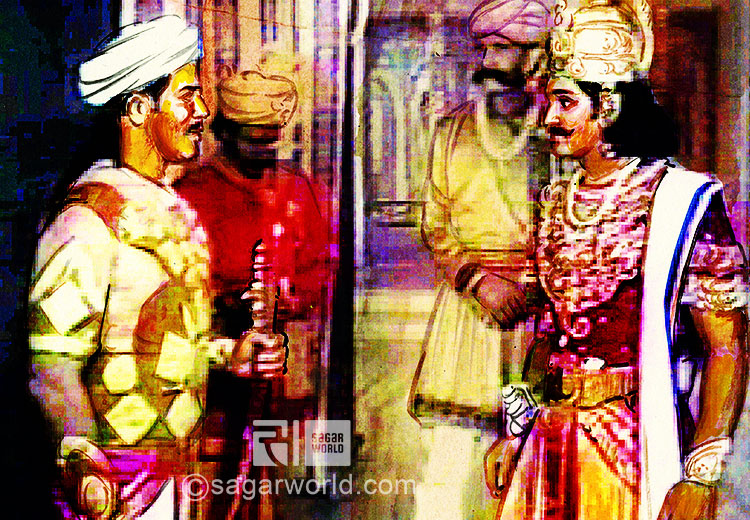 King Vikramaditya once again caught hold of Betaal and carrying him on his shoulder, started walking. Betaal started telling him the next story.There was a city named Vardhman. 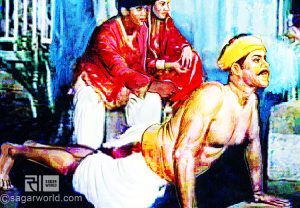 King Roopsen of Vardhman was very kind, noble and generous. In his city lived a brave man named Virvar. He was not earning anything and was always busy doing physical workouts.

One day, his wife was talking to him over this. He expressed his desire to become the personal bodyguard and general of the army of King Roopsen and decided to visit the king the next day. 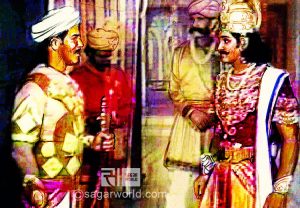 Just then, the gatekeeper came and informed the King that a man was wanting to meet him. King Roopsen asked him to give the man water if he was thirsty, food to eat if he was hungry, and give grass to his horse, and he would see him shortly.

King Roopsen then asked Virvar the reason for his visit. He expressed his wish to become the King’s personal bodyguard and that he would take nine tolas of gold everyday as a salary. The King was shocked to hear this. His associates told him Virvar must be mad for asking such a huge salary for such a job.  However, the King thought there must be some reason for Virvar to ask for such a huge amount as a salary.

King Roopsen asked Virvar if he could prove he was worth being paid such a large salary. Virvar replied that since the King takes care of everyone, and he would be able to sleep peacefully if Virvar was protecting him; that the King’s life was very precious, and by quoting a lesser amount as a salary for protecting that life, he would be degrading the king’s life.The king then asked him to exhibit proof of his skill. Virvar exhibited his skill, the King was impressed, and so appointed him as his personal bodyguard. 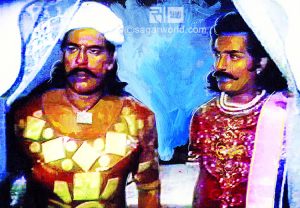 Virvar took nine tolas of gold home the first day. His wife asked what was the need for them to have so much wealth.

Virvar advised her to donate half of it to the poor, one-fourth to be spent on Brahmins, saints and hospitality for the guests that visited their house, and the rest they could keep for themselves and their children.

Virvar continued serving the king with great devotion. One night while Virvar was guarding his emperor, he heard a woman crying from a great distance off. Even King Roopsen woke up. He asked Virvar to go and find out what was the reason the woman was crying for.Virvar climbed on his horse and left. Roopsen also secretly followed him so that he could test Virvar’s dedication. 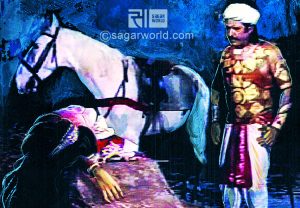 When Virvar reached the woman, he asked her who she was and why was she crying? She replied that she was Raj Laxmi of the state. She further said that she has to leave the state as Kaal was going to finish King Roopsen and as a result the state would also get finished. Virvar was shocked to discover that a noble and kind king like Roopsen would be finished that  way.Virvar asked her if there was any way to save the king and the state. She told that one yojan (about 8 miles) south from there was a cave where Kaaldevta lived, and who was hungry. If he came out, he would eat King Roopsen. Virvar asked if there was any way to please Kaaldevta. She said that he was hungry and needed satiety, but there was no one who could take the place of the king’s royal family.

Virvar immediately said that he and his family would replace them and left. Meanwhile, King Roopsen had been listening to their conversation hiding behind a tree. As soon as Virvar left, he came out and told Raj Laxmi that he could not let Virvar die for him because Virvar was his subject and as a King it was his duty to protect his subjects, and his conscience would not permit him to allow Virvar’s family to go to Kaaldevta and be die in his place. 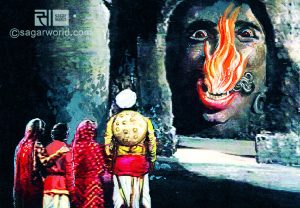 Rajlaxmi told him to let Virvar go as if Kaaldevta’s hunger was quenched, Roopsen would rule for another hundred years. But Roopsen did not listen to her. Meanwhile, Virvar had gone home and explained the situation to his family. His family members got ready to sacrifice their lives for their duty, and they went to Kaaldevta’s cave.

Virvar and his family surrendered themselves to Kaaldevta. He ate them all. Just then Roopsen arrived there. Kaaldevta was pleased with him for sending Virvar’s family in his place, but Roopsen said that it was not fair to have innocents sacrificed. He also entered Kaaldevta’s mouth.

Betaal then asked King Vikramaditya; Virvar had sacrificed his life for his master, and the King had no greed for his life.Both were great. But who was  the greater of the two,whose sacrifice was greater? If Vikram did not answer even after knowing the answer,he would kill him. Vikram replied that it was the King who was greater. It is the duty of a servant or bodyguard or bodyguard to serve his master and give up his life when necessary, but a  king who gives away everything, from his wealth and luxury to the state, and even his life for his subjects makes a greater sacrifice.

Vikram then asked Betaal to finish the story. Betaal laughed and said that there was no Kaaldevta and no death, it was just an illusion created by Raj Laxmi to test the dedication of Virvar, who took 9 tolas of gold everyday as salary, and all of them came out of it alive.

Raj Laxmi then praised Roopsen for being such a caring and noble king and Virvar for being such a dedicated and dutiful bodyguard. King Roopsen announced Virvar as the general of his army. But as Vikram had opened his mouth to speak, Betaal flew away again.