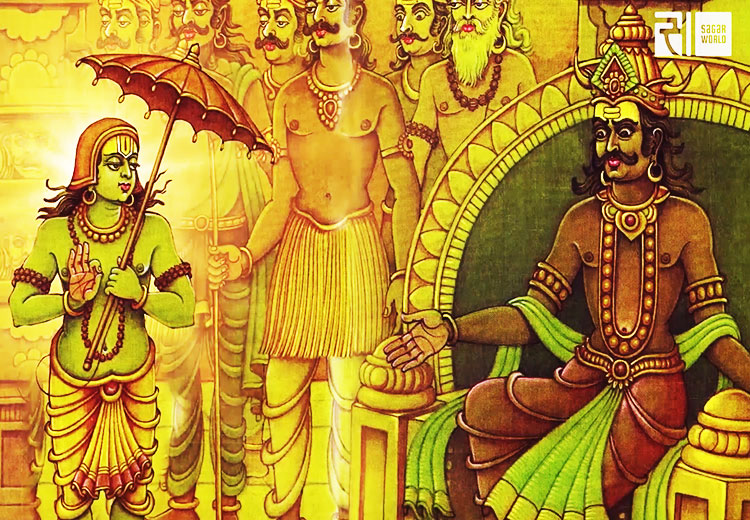 King Bali was a famous demon king and the grandson of Prahlad, the greatest devotee of Vishnu. He was also known as Mahabali.King bali was born of Devamba to Virochan, the son of Prahlad.

He grew up under the tutelage of his grandfather who instilled in him a sense of righteousness and Bhakti.

He expanded his kingdom and finally usurped heaven as well. The vanquished Devtas then went and complained to their protector Vishnu, who assured Indra that he himself would personally restore the authority of the Devas.

”King bali staunchly observed penance and attained great power and strength, and after defeating Indra established his rule over all three worlds.”bali, at the behest of his Guru Shukracharya, decided to conduct the Ashwamedh Yagya.

During this Yagya, Vishnu, in the guise of a small Brahmin boy (Vaman), appeared before Bali and asked for the grant of three paces of land.

Bali, who had vowed not to refuse anyone, promptly granted the wish, even ignoring the warnings of his guru Shukracharya that the Brahmin in disguise was Vishnu Himself and by asking for “three paces of land” he would certainly contrive in some way to take away Bali’s kingdom.

But Bali replied that  he was indeed fortunate that Lord Vishnu Himself was asking him for three paces of earth  as a donation,

and even if he became poor as a result, he would stand by his promise and give the Brahmin what he had asked for.

Vaman then measured earth and then heaven with His first two paces.

Then, with no place to put the third step, Bali offered his head to receive that third pace, and was thus banished to the Pataal lok (nether land).Impressed by Bali’s unselfish devotion and unwavering “dharma”, Bali was given the kingdom of ‘Sutal lok’ to rule, which had even more splendors than heaven. Vishnu also promised Bali that he (Lord Vishnu) would always remain with him as his protector by being a doorkeeper (dwaarpaal) of his kingdom in ‘Sutal lok’.

”King Bali made one last request. He requested that he be allowed to visit his subjects once a year, to ensure that his people were still happy, well fed and content. Lord Vishnu was pleased to grant bali this wish.

And so, once a year, on the sixteenth day of Kartika, the second day of Deepawali, when the days are short and the nights are long, King Bali returns to visit his subjects, who greet him with great rejoicing.”

Then Lord Vishnu disguised himself as Bali’s doorman, and protected him from all dangers. As a result, Vaikunth was devoid of the Lord, and Goddess Lakshmi became restless. She descended to earth as a Brahmin woman in an attempt to bring back her love. She went to Bali and told him that her husband has gone away for a long erra and she needed a place to stay. 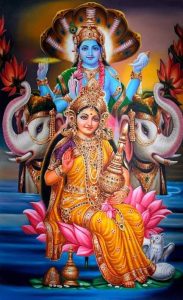 King Bali welcomed her with all hospitality and protected her as his own sister. Since that day of the arrival of the Brahmin woman, i.e., the Goddess herself, the entire household of Bali was suddenly blooming with happiness, wealth, and abundant harvests.

”Finally, on the day of Purnima in the month of Shravan, Goddess Lakshmi tied a thread of colored cotton on Bali’s wrist and prayed for protection and happiness. Touched by her sincerity, Bali granted her the boon that anything she wanted she would have. Immediately, Goddess Lakshmi pointed at the gatekeeper, and requested Bali to return her husband. ”

Confused, Bali asked how a mere guard could be the husband of such a virtuous lady? It was then, both Lord Vishnu and Goddess Lakshmi revealed their true identities. Bali,being a virtuous man and a protective brother, permitted the Lord to go back to Vaikunth, along with the Goddess. But in order to keep his promise to Bali, every year the Lord comes back for about four months a year, during the monsoon season.

In order to commemorate Bali’s devotion to the Lord and his sister, the Goddess, this festival is also known as Balev. Since then, brothers all over the world follow the tradition of inviting their sisters to tying the thread of love on their wrists, and celebrate Raksha Bandhan.”Demon king Bali became an immortal and beloved character in the ancient stories because of his benevolence and commitment to dharma.”