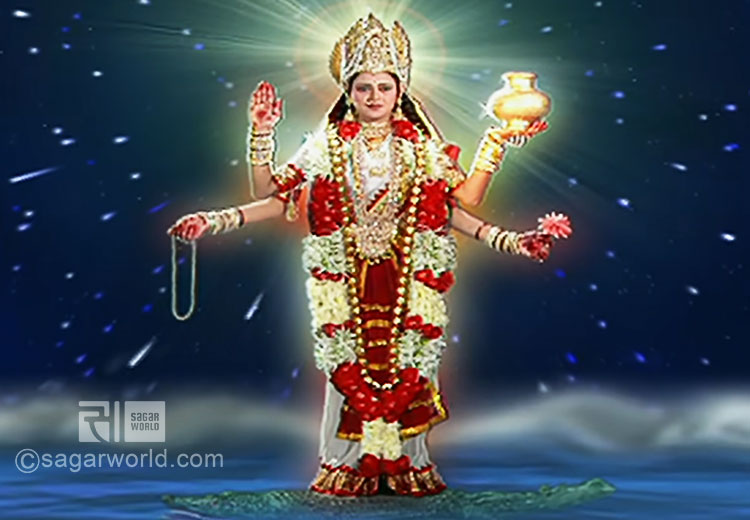 Ganga Goddess , the most  holy river of India starting from Gomukh, a place in the Himalayas and meets the sea in the Bay of Bengal near Ganga Sagar. According to one belief, the origin of Ganga was from the toenail of Lord Vishnu. That is why she is also called ‘Vishnupadi’ which means “Emanating from the Lotus feet of Supreme Lord Sri Vishnu.”

There are several Hindu beliefs that give various versions of the birth of Goddess Ganga. According to one version, the sacred water in Brahma‘s Kamandalu (water-vessel) became personified as a maiden, Ganga Goddess.

According to another (Vaishnavite) legend, Brahma had reverently washed the feet of Vishnu and collected this water in his Kamandalu (an oblong water pot made of dry gourd (pumpkin) or coconut shell or metal or wood of the Kamandalu tree usually with a handle and sometimes a spout.

Hindu ascetics or Yogis use it to store drinking water. Seen in the hands of the deities the water in the Kamandalu represents Amrita- the exilir of life).

According to yet another version, Ganga was the daughter of Himavan, King of the Himalayan Ranges, and his consort Mena; she was thus a sister of the goddess Parvati. Every version declares that she was raised in the heavens, under the tutelage of Brahma.

According to the Bhagawat Puran Katha, King Sagar’s sixty thousand sons were burnt to ashes because of the curse of Sage Kapil. For their deliverance, King Sagar’s great grandson Bhagirath observed penance and brought Ganga from heaven to earth.

That is why Ganga is known as ‘Bhagirathi’. Vishnu instigated Ganga to go to earth for the deliverance of Sagar’s sons – Then Ganga asked him as to how long will she have to line on earth? Vishnu told her,”Till 5,000 years of Kalyug you will have to live on earth that is a part of me and the sea will be your husband. Those who will bathe in your holy   water will attain happiness and merit.”

At the time of Ganga’s landing on the earth, to control her impact, Shiva held her in his matted hair. From Shiva’s matted hair Ganga came to earth reducing her speed and liberated King Sagar’s sons. Ganga is also called ‘Tripathaga’ because according to Puranas she has three streams – Swarnaganga (Mandakini), Bhuganga (Bhagirathi) and Pataalganga (Bhagwati).

The Hindu epic, Mahabharata tells that the Vasus who were cursed by Vashishta had requested Ganga to be their mother.

Ganga incarnated and became the wife of King Shantanu on a condition that at under no circumstances shall he question her actions, or she would leave him. As the seven Vasus were born as their children, one after the other, Ganga drowned them in her own waters, freeing them from their punishment and the King made no opposition.

Only when the eighth was born did the King finally oppose his wife, who thereafter left him. So the eighth son, Dyaus incarnated, remained alive, imprisoned in mortal form, and later became known in his mortal incarnation as Bhisma Pitamah (Devavrata), who is one of the most respected characters of the Mahabharata.

After some time, when they were pacified, they realized their mistake and both of them repented and were very sad. At this, Lord Vishnu told them to keep cool and not to be sad. He told them,”I can not make your curse invalid but I will give both of you equal importance. With my blessings, Saraswati will flow in half form as a river and half of her form will remain with Brahmaji.

Ganga will go on earth to make it holy and one of its formswill remain in the matted hair of Shiva. I also bless that Ganga will always flow as a holy river and will never dry up and will be known as a holy river that gives fruit of virtue.”

In the canons of Indian art, Ganga is visualized as voluptuous and beautiful, carrying an overflowing pot in her hand. The vessel conveys the idea of abundant life and fertility, which nourishes and sustains the universe. The second distinguishing aspect of Ganga’s iconography is her animal mount, which is often shown serving as a pedestal for her.

This is the Makara, a hybrid creature having the body of a Crocodile (Gharial) and the tail of a fish. The Makara in Hindu thought corresponds to the star sign of Capricorn in western astrology. The Makara is also the vehicle of the Vedic god of waters, Varun, thus establishing firmly Goddess Ganga’s Vedic roots.

The belief that Ganga is a holy river that frees one from his/her sins and gives the result of his/her virtues is connected with the blessings of Lord Vishnu. Most of India’s holy pilgrimages are on the banks of the River Ganga.

This includes the Sangam of Prayag (Allahabad, U.P.) where Ganga, Yamuna and Saraswati meet and Varanasi (Banaras) that are the most famous.

The ‘Kumbh Mela’, which is held at the Sangam of Prayag and three other places Haridwar, Nasik and Ujjain, is a very famous cultural event of India. During the Kumbh festival devotees from all over the world come for a dip in the River Ganga at the auspicious days. For Hindus in India, the Ganga is not just a river but also a mother, a goddess, a tradition, a culture and much more.

Some Hindus also believe life is incomplete without bathing in the Ganga at least once in one’s lifetime. Many Hindu families keep a vial of water from the Ganga in their house. This is done because it is believed to have sanctifying properties. Another popular belief is that a person should drink Ganga water in his/her last moments.

”For Hindus in India, the Ganga is not just a river but also a mother, a goddess, a tradition, a culture and much more.”

At the time of death, to give Gangajal (water of Ganga) and after the death to flow the ashes of the dead body in the water of Ganga is age old tradition and shows the faith of people in the holiness of this river.

After the funeral, Indians often immerse the bodies of their dead in the Ganga, which is believed to purify them of their sins.The British used to carry Ganga water on their ships because it never spoilt for days. It has certain medicinal qualities that keep it fresh.These days Ganga is known as Bhagirathi at its originating point. Alakananda, which originates from Badrinath, meets Bhagirathi at Devprayag and from there on she is called as Ganga. Gangaji first enters the plains at Haridwar (Gateway to the Gods) which is a holy town North of Delhi flowing majestically onwards to Prayag in Uttar Pradesh, finally entering the Indian State of Bengal where she meets the sea in the Bay of Bengal popularly known as “Ganga Sagar”.

”Ganga has been declared the “National River of India” by the government of India.”