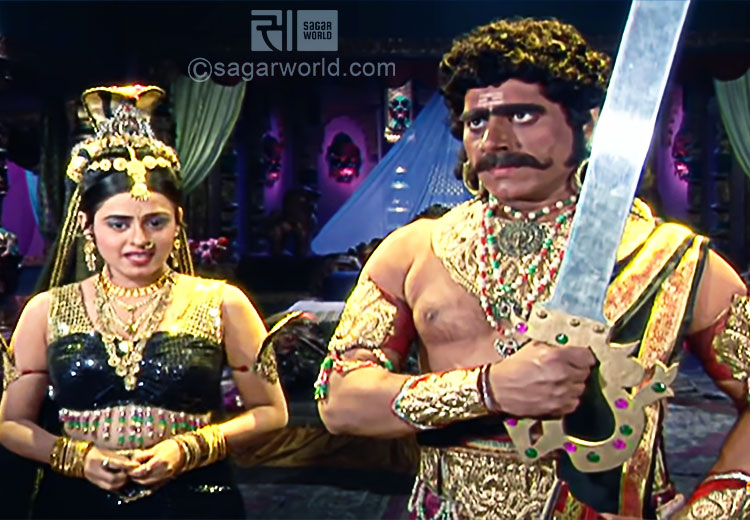 ”After becoming the King of the demons, Hiranyakashipu had attacked Nag lok. To save his subjects from the terror of Hiranyakashipu, helpless Nagraj married his daughter Kayadhu to Hiranyakashipu. Kayadhu was a great devotee of Lord Vishnu and getting married to demon king Hiranyakashipu was a terrible shock to her.”

Shukracharya had blessed Kayadhu – Hiranyakashipa’s wife, to have a son but he was not aware that this blessing of his would one day becomes the reason for Hiranyakashyap’s death. When Hiranyakashipu came to know that Kayadhu was a devotee of Vishnu, he was very angry.

Shukracharya was very displeased that he had blessed  Kayadhu to be the mother of a son. After some time, to attain immortality, Hiranyakashipu went to Mandarachal Mountain for penance.At this time, Kayadhu- Hiranyakashipa’s wife, was pregnant. Shukracharya tried to kill the fetus in Kayadhu’s womb, but Devi Ganga and Devi Uma foiled his attempts. In the absence of Hiranyakashyap, devtas attacked Demons.

After a fierce battle, the demons were defeated and ran away. Intoxicated with the win, Indra made Kayadhu his captive and started going towards heaven. On the way Devarshi Narad persuaded Indra to set Kayadhu  free  and then took her to Rishi Madhuchanda’s ashram.

”During this period, Naradji preached to Kayadhu on religion and knowledge. While her stay at sage Madhuchanda’s ashram, Kayadhu got educated in devotion, knowledge and religion, the fetus in her womb absorbed all this information.

As days passed, Kayadhu gave birth to a son. Naradji named him Prahlad. Prahlad also became a great devotee of Vishnu.”Hiranyakashyap returned after acquiring his boon from Brahmaji, and brought back his wife and son to the palace.

Later, he attacked the devtas and took over Swarg lok (heaven) and started harassing devtas, saints and sages. He also constantly tried to kill his son Prahlad for his worshipping Vishnu.Kayadhu always protested her husband’s hatred towards Lord Vishnu, but Hiranyakashyap never listened to her. It was because of his hatred towards Vishnu that Hiranyakashipu was killed by Vishnu in the form of Lord  Narsimha.