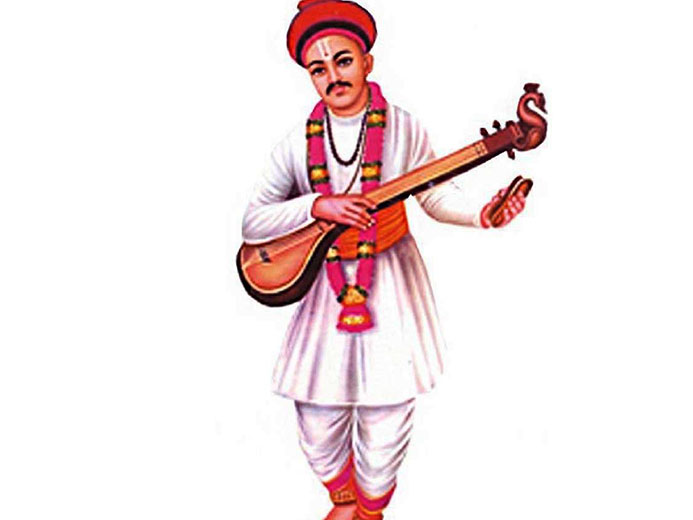 Greatest devotee of Lord Vitthal, Shri Namdev, is one of the most honored saints in the Marathi saint tradition. He is so famous in North India specially Punjab that his bani (speech), is included in Guru Granth Sahib and is sung with great devotion daily. The Abhangs (bhajans) written by him in Marathi has such a place in the hearts of Maharashtrians like that of God. He is said to be the creator of Marathi Abhangs.

Sant Namdev was born on 26th October 1270 (Vikram Era 1327), at sunrise of Sunday on the eleventh day of the bright fortnight of Kartik month in the town named Narasi Brahmani. His father’s name was Damasheth and mother’s name was Gonai. Few scholars believe his birth place to be Pandharpur, as his father had later settled in Pandharpur. By profession, his father was a tailor and was a great devotee of Lord Vitthal. Once, Damaseth asked his son to offer food to Lord Vitthal and went out. Child Namdev did not know how to pray or formally offer food. He went to the temple with flowers and food and offered garland to Vitthal, kept flower at his feet and kept the plate of food in front and asked God to have the food. When the idol did not eat food, Namdev sat down saying he would not move from there till Lord eats the food and pleased with the innocent devotion of the child, Lord Vitthal manifested and ate the food. Namdev was five years old that time.

Namdev was married when he was nine years old. His wife’s name was Rajai. Later, he became father of four sons and one daughter. His sons’ names were Naara, Bitha, Gonda, Mahada and daughter’s name was Limbai.

In spite of living a householder’s life Namdev always remained a saint. He never had proclivity towards worldliness. The flame of love for Lord Vitthal that started in his childhood continuously increased. Day and night he used to recite Vitthal’s name and always meditated for Lord Vitthal. A time also came when perplexed with his family members; he went and lived in the temple. This way, his relation shattered with his family members.

He made Visoba Khechar his guru who lived in a Shiva temple at Audhiya Nagnath, 50 miles away from Pandharpur. It is said that while discussing with Gyandev and his siblings (Nivrittinath, Sopandev, and Muktabai) about who was the greatest devotee, Goroba, a great saint said about Namdev that he was a weak devotee. Feeling hurt with this, Namdev went to Lord Vitthal crying all the way and Lord Vitthal only inspired him to take lessons from Visoba Khechar who was the disciple of Sant Gyaneshwar’s sister Muktabai.

After taking education from his teacher, Shri Namdev’s devotion became very strong. He believed Pandharpur to be the best area, Chandrabhagha, the most holy river and the one who came to Pandharpur and settled there, Dwarkadheesh Shri Vitthal, the ultimate God. The magnitude of his devotion was such that once on the occasion of Shivratri, Namdev went to the temple of Audhiya for the darshan of Shiva and started doing kirtan. Just then, a few Brahmins came and pushed him aside with disregard. Politely with folded hands, Namdev went behind the temple and started doing kirtan standing there. It is said that lord Bhutnath (Shiva) turned his face away from the Brahmins and facing towards Namdev stood there. Till date Shri Shankar is standing in the same position in that temple. Nandi who is always towards Shankar’s face is seated behind this temple.

Namdev had many disciples of which the first and foremost disciple was Parisa Bhagwat. In his abhangs, Parisa has written that Nama (Namdev) and Keshav is one only.

Shri Namdev was also very friendly with Sant Gyaneshwar. Seeing his devotion, Shri Gyaneshwar had said that Namdev is very peculiar and idol of love. He is truly the son of Vitthal. Shri Namdev loved Shri Gyandev so much that he went for a long pilgrimage along with him and visited Kashi, Ayodhya, Marwad, Tirupati, Rameshwaram etc.

In the year 1926, Gyandev opted for Samadhi and so did his siblings. This contemplation left a deep impact on to Shri Namdev. He has written about his heart touching pain in his abhangs which is known as “Samadhi- Abhang”. It is said that it was Gyaneshwar’s grief and separation that Shri Namdev who was never ready to leave Vitthal in Pandharpur, left Maharashtra and set out towards North in Punjab via Rajasthan.

In Punjab, he went to Bhutpind town of Amritsar district and then went to Bhattiwal. Here, the lake where Namdev had stayed, even today is known as Namiyana Talab. Even here, he got many disciples. Then, tired of the crowd, he went inside the jungle and lived there. Here, he used to write Abhangs in peace. Along with Marathi, Namdev has written Abhangs in five languages. There are Padas (poems in praise of lord) written by him in Punjabi and Hindi also.

Shri Namdev had lived in Ghooman village of Gurdaspur district where there is a Thakurdwara built by him. Here, there is a collection of poems in the ancient hand written granths in the name of “Namdev ki Mukhbani”.

Namdev lived for eighteen years in Punjab. When he was 80 years old, his soul asked him to take up Samadhi which he did not want to do in Punjab that is why he came back to his Vitthal in Pandharpur. 3rd July 1350, Vikram Samvat 1407(the year of Vikram era), on the thirteenth day of bright fortnight of Ashadh month Shri Namdev died in front of Vitthal temple in Pandharpur and united with the supreme soul forever.

Sant Gyandev has established Varkari Panth and Sant Namdev developed it immensely. This sect, even today is heading progressively on the path shown by him. Devotees even today sing his Abhangs to please God.